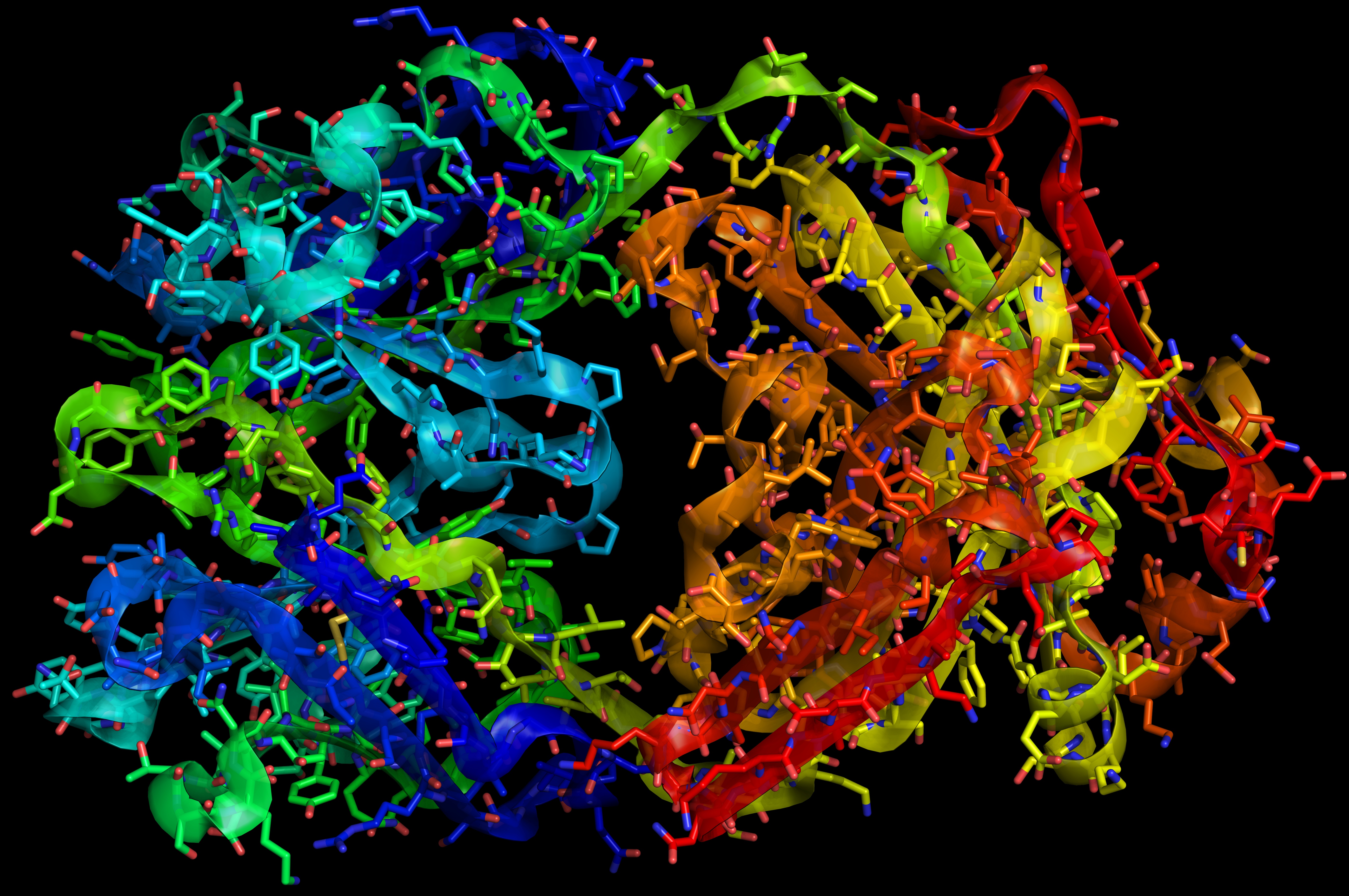 is a humanized which binds to the extracellular segment of the HER2/neu receptor. Cells treated with trastuzumab undergo arrest during the G1 phase of the so there is reduced proliferation. It has been suggested that trastuzumab induces some of its effect by of HER2/neu leading to disruption of receptor dimerization and signaling through the downstream PI3K cascade. P27Kip1 is then not phosphorylated and is able to enter the nucleus and inhibit cdk2 activity, causing cell cycle arrest. Also, trastuzumab suppresses by both induction of antiangiogenic factors and repression of proangiogenic factors. It is thought that a contribution to the unregulated growth observed in cancer could be due to proteolytic cleavage of HER2/neu that results in the release of the extracellular domain. Trastuzumab has been shown to inhibit HER2/neu ectodomain cleavage in breast cancer cells.

Routine HER-2 status is performed by IHC, there are two FDA-approved commercial kits available; Dako HercepTest [http://www.dakousa.com/index/prod_search/prod_baseproducts.htm?productareaid=1&productgroupid=3&productsubgroupid=1003000] and Ventana Pathway [http://www.ventanamed.com/] . These are highly standardised, semi-quantitative assays which stratify expression levels into; 0 (<20,000 receptors per cell, no visible expression), 1+ (~100,000 receptors per cell, partial membrane staining, < 10% of cells overexpressing HER-2), 2+ (~500,000 receptors per cell, light to moderate complete membrane staining, > 10% of cells overexpressing HER-2), and 3+ (~2,000,000 receptors per cell, strong complete membrane staining, > 10% of cells overexpressing HER-2). The presence of cytoplasmic expression is disregarded. Treatment with trastuzumab is indicated in cases where HER-2 expression has a score of 3+. However, IHC has been shown to have numerous limitations, both technical and interpretative, which have been found to impact on the reproducibility and accuracy of results, especially when compared with ISH methodologies. It is also true, however, that some reports have stated that IHC provides excellent correlation between gene copy number and protein expression.

(FISH) is viewed as being the “gold standard” technique in identifying patients who would benefit from trastuzumab. It is, however expensive, and requires a fluorescent microscope and an image capture system. The main expense involved with CISH is in the purchase of FDA-approved kits, and as it is not a fluorescent technique it does not require specialist microscopy and slides may be kept permanently. Comparative studies between CISH and FISH have shown that these two techniques show excellent correlation. The lack of a separate chromosome 17 probe on the same section is an issue with regards to acceptance of CISH.

Currently the recommended assays are a combination of IHC and FISH, whereby IHC scores of 0 and 1+ are negative (no trastuzumab treatment), scores of 3+ are positive (trastuzumab treatment), and score of 2+ (equivocal case) is refereed to FISH for a definitive treatment decision. Industry best practices indicate the use of FDA-cleared by laboratories for mechanized and automated processing of specimen, thereby reducing process variability, avoiding equivocal cases, and enhancing probability of Trastuzumab therapy.

Trastuzumab has had a "major impact in the treatment of HER2-positive metastatic breast cancer".

Some recent clinical trials have found trastuzumab reduces the risk of relapse in breast cancer patients by 50% when given in the adjuvant setting (i.e. after breast cancer surgery, before the cancer has spread any further) for one year.

In one British trial this translated as follows: 9.4% of those on the drug relapsed as opposed to the 17.2% of those not on trastuzumab. In this study, almost five out of six patients would not have developed a recurrence during the study whether or not they received trastuzumab, and almost one in ten patients relapsed despite it and therefore received no apparent benefit from the treatment. Only one patient in 13 received positive benefit in terms of cancer recurrence. However, these numbers solely consider the risk of a cancer recurrence and do not account for morbidity and mortality (sickness and death) due to the treatment's side effects.

Even among the 20% of first-time breast cancer patients for whom trastuzumab is an appropriate treatment, the actual net benefits are not overwhelming when viewed in terms of all-cause mortality. All-cause mortality helps balance a reduced risk of death from cancer against the increased risk of death from a treatment's side effects. Repeated, large-scale studies show that it is usually necessary to treat between 25 and 100 patients to prevent a single death during the next two to four years. [http://www.bpac.org.nz/magazine/2007/april/herceptin.asp] , [http://www.sws-pct.nhs.uk/PEC/2005/061205/Enc_08.pdf] For each life saved, between ten and 25 patients will develop heart disease; despite effective treatments, some of these patients will die from heart disease. For example, in the N9831 (arm C) and NSABP B31 joint analysis, approximately two patients died of excess heart disease or other complications for every three lives saved by reducing breast cancer. [http://www.bpac.org.nz/magazine/2007/april/herceptin.asp#tab1] The excess heart disease induced by the drug explains why it is necessary to treat up to 100 cancer patients to save a single life during a two-year study period.

There has been some recent debate as to whether these benefits may have been over-stated.

The media have sometimes misrepresented trastuzumab as a "cure all" or "wonder drug" and this has caused confusion amongst women with breast cancer about whether they should be receiving the drug or not. [cite web|url=http://www.twinkletwinkles.com/2006/06/herceptin-look-out-theyre-at-it-again.html|title=Misleading press coverage of trastuzumab]

The optimal duration of adjuvant trastuzumab is currently unknown. One year of treatment is generally accepted as the ideal length of therapy based on current clinical trial evidence that demonstrated the superiority of one year treatment over none. However, a small Finnish trial also showed similar improvement with nine weeks' of treatment over no therapy. [cite journal |author=Joensuu H, Kellokumpu-Lehtinen PL, Bono P "et al" |title=Adjuvant docetaxel or vinorelbine with or without trastuzumab for breast cancer |journal=N Engl J Med |volume=354 |issue=8|pages=809–20 |year=2006 |pmid=16495393|doi=10.1056/NEJMoa053028] Due to the lack of direct head-to-head comparison in clinical trials, it is unknown whether a shorter duration of treatment may be just as effective (with less side effects) than the current accepted practice of treatment for one year. Debate about treatment duration has become a relevant issue for many public health policy makers due to the high financial costs involved in the administration of this treatment for one year. Some countries with a free public health system, such as New Zealand, have opted to only fund for nine weeks of adjuvant therapy as a result.

One of the significant complications of trastuzumab is its effect on the heart. Trastuzumab is associated with cardiac dysfunction in 2-7% of cases. [ cite journal|doi= 10.1200/JCO.20.5.1215|author= Seidman, A, et al. |title=Cardiac Dysfunction in the Trastuzumab Clinical Trials Experience |journal= Journal of Clinical Oncology|volume=20|pages=1215–1221|year=2002 |pmid=11870163] . As a result, regular cardiac screening with either a or is commonly undertaken during the trastuzumab treatment period.

Approximately 10% of patients are unable to tolerate this drug because of pre-existing heart problems; physicians are balancing the risk of recurrent cancer against the higher risk of death due to cardiac disease in this population. The risk of is increased when trastuzumab is combined with chemotherapy (which itself is associated with cardiac toxicity).

The biotech company gained FDA approval for trastuzumab in September 1998. The drug was jointly developed by that company, where the antibody was first discovered by scientists that included Dr. , Dr. ,others and the at , where Dr. subsequently worked further on trastuzumab's development. A book about Dr. Slamon's work, was made in to a television film called "Living Proof", that premiered in 2008.

In the clinical trials leading up to trastuzumab's approval, 42% of patients taking trastuzumab in combination with the chemotherapy drug had significant responses. The comparable rate for the taxane alone was only 16%.Common side effects of the infusion to trastuzumab were commonly fever, chills, pain, fatigue, nausea, vomiting and headache.

Trastuzumab costs about seventy thousand US dollars for a full course of treatment. [cite journal | author = Fleck L | title = The costs of caring: Who pays? Who profits? Who panders? | journal = Hastings Cent Rep | volume = 36 | issue = 3 | pages = 13–7 | year = 2006| pmid = 16776017 | doi = 10.1353/hcr.2006.0040] Recently there has been controversy in New Zealand and the UK about public health funding of this drug in the adjuvant setting due to its high cost and perceived limited overall survival (though not breast cancer-free survival). [cite web | url=http://www.nzherald.co.nz/search/story.cfm?storyid=00001939-D9A0-1532-910183027AF1010F | title=Breast cancer drug to remain unfunded | publisher=New Zealand Herald | date= | accessdate=2006-12-01] The campaign waged by cancer victims to get the governments to pay for their treatment has gone to the highest levels in the courts and the cabinet to get it licensed against the judgement of the regulator. [cite web | url=http://news.bbc.co.uk/2/hi/health/4684852.stm | title=The trastuzumab judgement | publisher=BBC News | date= | accessdate=2006-12-01] [cite web | url=http://www.nice.org.uk/page.aspx?o=328396 | title=Update on Herceptin appraisal | publisher=National Institute for Health and Clinical Excellence | accessdate=2006-12-01] After a sustained campaign from cancer sufferers, the Ontario Ministry of Health in July 2005 decided that it would pay for treatments with trastuzumab and two other new and controversial anti-cancer drugs. [cite web | url=http://www.cbc.ca/canada/toronto/story/2005/07/22/to-drugtherapies20050722.html | title=Ontario to pay for cancer drugs | date= | publisher=Canadian Broadcasting Corporation | accessdate=2006-12-01]

Few reporters have questioned the pricing of this drug but when asked, Genentech refuses to give details to explain the high costs. [cite web | url=http://www.scoop.co.nz/stories/HL0602/S00144.htm | title=Will Herceptin Media Blitz Help Or Harm Patients? | date= | publisher=Scoop | accessdate=2006-12-01] Trastuzumab brought in $327 million in revenue for Genentech in the fourth quarter of 2007.

Since October 2006 trastuzumab has been made available for Australian women with early stage breast cancer via the public benefits scheme. This is estimated to cost the country over $1 million Australian. When trastuzumab was introduced in the UK there was considerable variation in availability between different geographical regions. Scotland was first to make the drug widely available - other areas eventually followed suit - but many women were prompted to launch legal actions against their local health authority in an effort to be treated with the drug.