Hodgkin's lymphoma, previously known as Hodgkin's disease, is a type of lymphoma, which is a cancer originating from white blood cells called lymphocytes. It was named after Thomas Hodgkin, who first described abnormalities in the lymph system in 1832.[1][2] Hodgkin's lymphoma is characterized by the orderly spread of disease from one lymph node group to another and by the development of systemic symptoms with advanced disease. When Hodgkins cells are examined microscopically, multinucleated Reed-Sternberg cells (RS cells) are the characteristic histopathologic finding. Hodgkin's lymphoma may be treated with radiation therapy, chemotherapy or hematopoietic stem cell transplantation, the choice of treatment depending on the age and sex of the patient and the stage, bulk and histological subtype of the disease.

The disease occurrence shows two peaks: the first in young adulthood (age 15–35) and the second in those over 55 years old.[3]

The 10-year overall survival rate is more than 90% for any stage, though early diagnosis may help. Since many patients are young, they often live 40 years or more after treatment. However, few studies follow patients as long as 25 years, and those studies are of older treatments with more life-threatening adverse effects, so it is impossible to predict long-term outcomes of newer, less harmful treatments. Radiation treatments, and some chemotherapy drugs, pose a risk of causing potentially fatal secondary cancers, heart disease, and lung disease 40 or more years later. Modern treatments greatly minimize the chances of these late effects.[4] 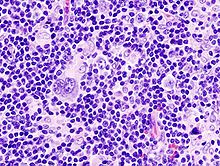 CT image of a 46-year-old patient with Hodgkin's lymphoma, image at neck height. On the left side of the patient's neck enlarged lymph nodes are visible (marked in red).

For the other forms, although the traditional B cell markers (such as CD20) are not expressed on all cells,[6] Reed-Sternberg cells are usually of B cell origin.[7][8] Although Hodgkin's is now frequently grouped with other B cell malignancies, some T cell markers (such as CD2 and CD4) are occasionally expressed.[9] However, this may be an artifact of the ambiguity inherent in the diagnosis.

Hodgkin's cells produce Interleukin-21 (IL-21), which was once thought to be exclusive to T cells. This feature may explain the behavior of classical Hodgkin's lymphoma, including clusters of other immune cells gathered around HL cells (infiltrate) in cultures.[10]

The staging is the same for both Hodgkin's as well as non-Hodgkin's lymphomas.

After Hodgkin's lymphoma is diagnosed, a patient will be staged: that is, they will undergo a series of tests and procedures that will determine what areas of the body are affected. These procedures will include documentation of their histology, a physical examination, blood tests, chest X-ray radiographs, computed tomography (CT) scans or magnetic resonance imaging (MRI) scans of the chest, abdomen and pelvis, and a bone marrow biopsy. Positron emission tomography (PET) scan is now used instead of the gallium scan for staging. In the past, a lymphangiogram or surgical laparotomy (which involves opening the abdominal cavity and visually inspecting for tumors) were performed. Lymphangiograms or laparotomies are very rarely performed, having been supplanted by improvements in imaging with the CT scan and PET scan.

Patients with Hodgkin's lymphoma may present with the following symptoms:

There are no guidelines for preventing Hodgkin's lymphoma; this is because the cause is unknown or multifactorial. A risk factor is something that statistically increases one's chance of contracting a disease or condition. Risk factors for Hodgkin's lymphoma include:

Hodgkin's lymphoma must be distinguished from non-cancerous causes of lymph node swelling (such as various infections) and from other types of cancer. Definitive diagnosis is by lymph node biopsy (usually excisional biopsy with microscopic examination). Blood tests are also performed to assess function of major organs and to assess safety for chemotherapy. Positron emission tomography (PET) is used to detect small deposits that do not show on CT scanning. PET scans are also useful in functional imaging (by using a radiolabeled glucose to image tissues of high metabolism). In some cases a Gallium Scan may be used instead of a PET scan.

Affected lymph nodes (most often, laterocervical lymph nodes) are enlarged, but their shape is preserved because the capsule is not invaded. Usually, the cut surface is white-grey and uniform; in some histological subtypes (e.g. nodular sclerosis) a nodular aspect may appear.

A fibrin ring granuloma may be seen.

Micrograph of a classic Reed-Sternberg cell. 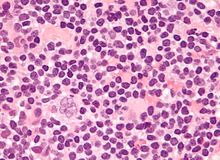 It should be noted that the common non-Hodgkin's treatment, rituximab (which is a monoclonal antibody against CD20) is not routinely used to treat Hodgkin's lymphoma due to the lack of CD20 surface antigens in most cases. The use of rituximab in Hodgkin's lymphoma, including the lymphocyte predominant subtype has been reviewed recently.[19]

Although increased age is an adverse risk factor for Hodgkin's lymphoma, in general elderly patients without major comorbidities are sufficiently fit to tolerate standard therapy, and have a treatment outcome comparable to that of younger patients. However, the disease is a different entity in older patients and different considerations enter into treatment decisions.[20]

For Hodgkin's lymphomas, radiation oncologists typically use external beam radiation therapy (sometimes shortened to EBRT). Radiation oncologists deliver external beam radiation therapy to the lymphoma from a machine called a linear accelerator. Patients usually describe treatments as painless and similar to getting an X-ray. Treatments last less than 30 minutes each, every day but Saturday and Sunday.

Treatment of Hodgkin's disease has been improving over the past few decades. Recent trials that have made use of new types of chemotherapy have indicated higher survival rates than have previously been seen. In one recent European trial, the 5-year survival rate for those patients with a favorable prognosis was 98%, while that for patients with worse outlooks was at least 85%.[22]

In 1998, an international effort[23] identified seven prognostic factors that accurately predict the success rate of conventional treatment in patients with locally extensive or advanced stage Hodgkin's lymphoma. Freedom from progression (FFP) at 5 years was directly related to the number of factors present in a patient. The 5-year FFP for patients with zero factors is 84%. Each additional factor lowers the 5-year FFP rate by 7%, such that the 5-year FFP for a patient with 5 or more factors is 42%.

The adverse prognostic factors identified in the international study are:

Other studies have reported the following to be the most important adverse prognostic factors: mixed-cellularity or lymphocyte-depleted histologies, male sex, large number of involved nodal sites, advanced stage, age of 40 years or more, the presence of B symptoms, high erythrocyte sedimentation rate, and bulky disease (widening of the mediastinum by more than one third, or the presence of a nodal mass measuring more than 10 cm in any dimension.)

Unlike some other lymphomas, whose incidence increases with age, Hodgkin's lymphoma has a bimodal incidence curve; that is, it occurs most frequently in two separate age groups, the first being young adulthood (age 15–35) and the second being in those over 55 years old although these peaks may vary slightly with nationality.[25] Overall, it is more common in males, except for the nodular sclerosis variant, which is slightly more common in females. The annual incidence of Hodgkin's lymphoma is about 1 in 25,000 people, and the disease accounts for slightly less than 1% of all cancers worldwide. 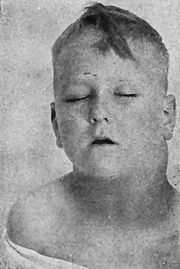 Hodgkin's lymphoma was first described in an 1832 report by Thomas Hodgkin, although Hodgkin noted that perhaps the earliest reference to the condition was provided by Marcello Malpighi in 1666.[1][2] While occupied as museum curator at Guy's Hospital, Hodgkin studied seven patients with painless lymph node enlargement. Of the seven cases, two were patients of Richard Bright, one was of Thomas Addison, and one was of Robert Carswell.[1] Carswell's report of this seventh patient was accompanied by numerous illustrations that aided early descriptions of the disease.[27]

Hodgkin's report on these seven patients, entitled "On some morbid appearances of the absorbent glands and spleen", was presented to the Medical and Chirurgical Society in London in January 1832 and was subsequently published in the society's journal, Medical-Chirurgical Society Transactions.[1] Hodgkin's paper went largely unnoticed, however, even despite Bright highlighting it in an 1838 publication.[1] Indeed, Hodgkin himself did not view his contribution as particularly significant.[28]

In 1856, Samuel Wilks independently reported on a series of patients with the same disease that Hodgkin had previously described.[28] Wilks, a successor to Hodgkin at Guy's Hospital, was unaware of Hodgkin's prior work on the subject. Bright made Wilks aware of Hodgkin's contribution and in 1865, Wilks published a second paper, entitled "Cases of enlargement of the lymphatic glands and spleen", in which he called the disease "Hodgkin's disease" in honor of his predecessor.[28]

Tissue specimens from Hodgkin's seven patients remained at Guy's Hospital for a number of years. Nearly 100 years after Hodgkin's initial publication, histopathologic reexamination confirmed Hodgkin's lymphoma in only three of seven of these patients.[28] The remaining cases included non-Hodgkin lymphoma, tuberculosis, and syphilis.[28]