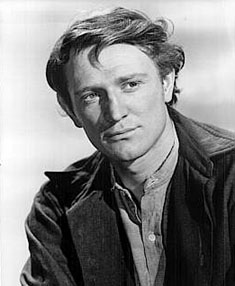 After recovering from the disease he moved to , wanting to become a director. He could not find any suitable courses and enrolled in the (LAMDA) to learn acting. While still a student, Harris rented the tiny "off-West End" Irving Theatre, and directed his own production of the play "Winter Journey (The Country Girl)". The show was a critical success, but a financial failure, and Harris lost all his savings on the venture.

As a result, he ended up temporarily homeless, sleeping in a coal cellar for six weeks. After completing his studies at the Academy, Harris joined 's . He began getting roles in productions, starting with "" in 1956, a transfer from the Theatre Workshop.

Harris made his film debut in 1958 in the film "Alive and Kicking". He had a memorable in "The Guns of Navarone" as an Australian air force pilot who reports that blowing up the "bloody guns" of the title is impossible by air. For his role in "Mutiny on the Bounty", despite being virtually unknown, he insisted on third billing, behind and .

His first star turn was in the 1963 film "", as a bitter young , Frank Machin, who becomes an acclaimed footballer. For his role as Frank Machin, Harris won the 1963 award for best actor at the . He also won acclaim and notice for his leading role (with ) in 's famous "lost masterpiece" "" (1965), as an Irish turned Confederate man during the .

He appeared as in the film adaptation of "Camelot" (in which he was cast despite his limited singing range, just like ), and proceeded to appear on stage in that role for years. In 1966, Harris starred as Cain in John Huston's "". He recorded several albums, one "(A Tramp Shining)" included the seven-minute hit song written by Jimmy Webb, "MacArthur Park" (which Harris mispronounced as "MacArthur's Park"); that song reached #2 on the pop chart, while topping several charts in Europe, in the summer of 1968. A second all-Webb composed album, "The Yard Went on Forever", was released in 1969. He also wrote one of the songs, "There are Too Many Saviours on My Cross", considered to be a criticism of the sectarian violence in .

Some memorable performances followed, among them a role as a reluctant police informer in "The Molly Maguires" (1970) alongside . In 1971 he starred in the film "" and in the low-budget "Orca" in 1977. Harris achieved a form of cult status for his role as mercenary tactician Rafer Janders in the 1978 film "". Also, in 1973, Harris wrote a highly acclaimed book of poetry, titled "I, In The Membership Of My Days" which was later released in record format with him reciting his poems.

By the end of the 1980s, Harris had gone a long time without a significant film role. He was familiar with the stage plays of fellow Irishman , and had heard that one of them, "", was being adapted for film by director . Sheridan was working with actor on the adaptation, intending to feature McAnally in the lead role (Bull McCabe). When McAnally died suddenly during initial preparations for the film, Harris began a concerted campaign to be cast as McCabe. This campaign eventually succeeded, and the film version of "" (which also starred ) was released in 1990. Harris earned an Academy Award nomination for his portrayal. In 1992, he had a small but memorable role in "Patriot Games" as a member of .

Later in his career, Harris appeared in two Oscar-winning films, first as gunman "English Bob" in the 1992 western, "", as well as portraying in Ridley Scott's "Gladiator" (2000). Harris also played a lead role alongside in the 1995 movie "Cry, the Beloved Country".

Harris initially declined the offer to play in the Harry Potter films, not wanting to commit to subsequent sequels. Upon learning that he had turned down the role, his granddaughter convinced him that he was "going to do it." [ [http://www.people.com/people/article/0,26334,623179,00.html Richard Harris: The Envelopes, Please : People.com ] ] He played the role of Headmaster Dumbledore in the first two Harry Potter film adaptations, but died before filming commenced on the third movie.

In a 2001 interview with the Toronto Star, Harris expressed his fear that his association with the Harry Potter films would outshine the rest of his career, stating: "Because, you see, I don't just want to be remembered for being in those bloody films, and I'm afraid that's what going to happen to me." [ [http://www.the-leaky-cauldron.org/2003/7/9/on-richard-harris On Richard Harris - The Leaky Cauldron ] ]

In the 2002 re-make of "The Count of Monte Cristo", Harris performed as the book's fictionalized character of , the jailed priest and former ic soldier who instructs Dantès in language, science, and combat, and provides him a .

In 2003, his voice could be heard as the character Opaz in the animated film "". The movie was dedicated to him posthumously.

In 1957, he married , daughter of . Their three children are actor , actor Jamie Harris (born as Tudor St. John Harris, but known as Jamie since childhood), and director (who has a son named Marlowe, born 2002, with Australian actress ). Harris and Rees-Willams were divorced in 1969, and Elizabeth married another actor, .

Harris' second marriage was to American actress , who was 16 years his junior; that marriage also ended in divorce. He was a member of the , despite his divorces, and was also knighted by in 1985. He was reportedly good friends with .

Harris often told stories about his haunted English Mansion, , which was sold later to of fame. According to Harris, the tower was haunted by an eight-year-old boy who had been buried in the tower. The boy often kept Harris awake at night until he one day built a nursery for the boy to play in, which calmed the disturbances to some extent. [ [http://www.theastralworld.com/ghosts/richardharrisghost.php Richard Harris and His Haunted Mansion ] ]

Harris died of on , aged 72, two and a half weeks before the U.S. premiere of "Harry Potter and the Chamber of Secrets". He was replaced as Dumbledore by fellow Irish-born actor .

He had a lifelong love affair with alcohol, but then went teetotal.A memorable incident was an appearance on "" where he recounted to host how he had just polished off two bottles of fine wine in a restaurant and decided that he would then be going on the wagon:"And I looked at my watch and it was... Well isn´t that spooky! It was the same time it is now: 11:20!"

After several years without alcohol, Harris started drinking again before the end of his life.

Whenever he was in , Harris lived at the . According to hotel archivist Susan Scott, when he was being taken from the hotel on a stretcher, shortly before his death, he warned diners, 'It was the food!' [ [http://news.bbc.co.uk/1/hi/magazine/6990706.stm BBC NEWS | Magazine | Home suite home ] ]

The late was his sister-in-law; her two children with Dermot Harris were later adopted by 007 actor .

Richard was cremated and his ashes were scattered in .

On , Manuel Di Lucia, of , , a long-time friend, organized a bronze lifesize statue of Richard Harris at the age of eighteen playing rackets. The sculpture was unveiled in Kilkee. The sculptor was Seamus Connolly. [ [http://www.breakingnews.ie/archives/?c=ENTERTAINMENT&jp=cwqlsnkfidau&d=2006-10-02 BreakingNews.ie: Archives :2006-10-02 ] ]

Another life size statue of Richard Harris, as King Arthur from his film, "Camelot", has been erected in Bedford Row, in the centre of his home city of Limerick. [ [http://www.businesslimerick.ie/index.php?p=news Business Limerick ] ] The sculptor of this piece was the well known Irish artist, Jim Connolly, a graduate of the .

*Album of the Year for "A Tramp Shining"-1968
*Contemporary Pop Male Vocalist for "MacArthur Park"-1968
*Best Spoken Word, Documentary or Drama Recording for "The Prophet"-1975