The Guns of Navarone (film)

The Guns of Navarone (film)

Infobox_Film
name = The Guns of Navarone 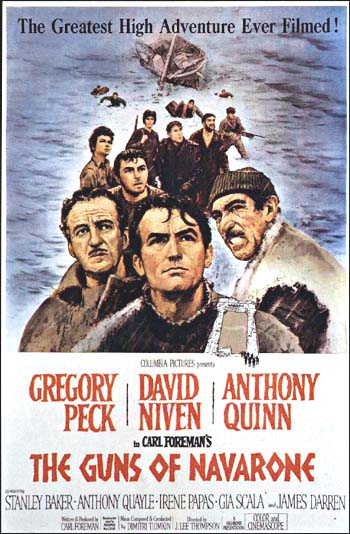 "The Guns of Navarone" is a 1961 film based on a well-known 1957 novel about by Scottish thriller writer . It stars , and , along with and . The book and the film share the same basic plot: the efforts of an Allied team to destroy a seemingly impregnable German that threatens Allied naval ships in the , and prevents 2,000 isolated British troops from being rescued.

The film version of "The Guns of Navarone" was part of a cycle of big-budget World War II adventures that included "" (1957), "The Longest Day" (1962) and "The Great Escape" (1963). The screenplay, adapted by producer , made significant changes in virtually all of the major characters from the novel. A new character, Major Franklin, initially leads the expedition; Dusty Miller, in the book a tough rough-edged Anglo-American/Polish explosives expert, becomes a dapper Professor of Chemistry; Casey Brown, a Scottish engineer and communications expert becomes a bearded knife-wielding killer and Lt. Stevens, a Greek-speaking navigation expert, vanishes from the team. (In the book, Stevens falls from the cliff as they are climbing it, breaks his leg, and eventually dies; in the film it is Franklin who falls and breaks his leg, but he survives.) The character of Mallory, originally a New Zealander, is played by American actor Gregory Peck and his nationality is not stated explicitly. At one point he remarks about his "stupid decency".

The film also introduced romance and a subplot that radically altered the relationship between Mallory and Andrea.

The film was directed by after original director (best-known for the quirky comedies he directed for ) was fired by Carl Foreman due to "creative differences". The Greek island of provided locations, and Quinn was so taken with the area that he bought land there in an area still called Anthony Quinn Bay.

The film was a major success and the top grossing film of 1961. As a result, MacLean reunited Mallory, Miller, and Andrea in the best-seller "Force 10 From Navarone", the only sequel of his long writing career, in . That was in turn filmed as the significantly different "Force 10 from Navarone" in by British director , a veteran of several films. Despite a cast that included Robert Shaw, Edward Fox, and , it was a critical and commercial failure.

The film opens with an aerial view of the Greek Islands, and a narrator (), setting the scene. The year is 1943, and 2000 British soldiers are holed up on the island of Kheros in the Aegean near Turkey. Rescue by the Royal Navy is impossible because of massive guns on the nearby island of Navarone. Time is short, because the Germans are expected to launch an assault on the British forces, to draw Turkey into the war on the Axis' side.

Efforts to blast the guns by air have proven fruitless, so a team has been hastily assembled to sail to Navarone and dynamite the guns. Led by Major Roy Franklin (), they are Capt. Keith Mallory (), Andrea Stavros (), a Colonel in the defeated Greek army, Corporal Miller (), an explosives expert, Greek-American street tough Spyros Pappadimos () and "Butcher" Brown (), an engineer and expert knife fighter.

Disguised as Greek fishermen on a decrepit boat, they sail across the . They are intercepted by a German boat and boarded. On Mallory's signal, they attack and kill all the Germans and blow up the patrol boat. Afterwards, Mallory confides to Franklin that Stavros has sworn to kill him after the war, because he was inadvertently responsible for the deaths of Stavros' wife and children.

Their landing on the coast that night is hampered by a violent storm. The ship is wrecked and they lose part of their equipment, most notably the food and medical supplies. Franklin is badly injured while scaling the cliff, the injury later becoming infected with . They find that the cliff is in fact guarded after all. Miller, a friend of Franklin, suggests that they leave Franklin to be "well cared for" by the enemy. Mallory, who assumes command of the mission, feels that Franklin would be forced to reveal their plans, so he orders two men to carry the injured man on a . After Franklin tries to commit suicide, Mallory lies to him, saying that their mission has been "scrubbed" and that a major naval attack will be mounted on Navarone. Attacked by German soldiers, they split up, leaving Andrea behind with his sniper rifle, while they move on to their next rendezvous point. They contact local resistance workers, Spyros's sister Maria () and her friend Anna ().

The mission is continually dogged by Germans - clearly there is a major intelligence leak - but they make their way across the rugged countryside. They are captured when they try to find a doctor for Franklin. They escape by donning German uniforms, but leave Franklin behind, so he can get medical attention. Franklin is injected with the truth drug and gives up the false "information", as Mallory had hoped. As a result, German units are deployed away from the guns and in the direction of the supposed "invasion" route.

While making final preparations for the destruction of the guns, Miller discovers that most of his explosives have been sabotaged and deduces that Anna is the saboteur. She pleads that she was coerced by the Germans into treachery, but while Mallory and Miller argue over her fate, complicated by Mallory's seduction by Anna the night before, Maria shoots her dead as a price of disloyalty. The team splits up to carry out their objectives: While Mallory and Miller go for the guns themselves, Stavros and Pappadimos are to create a distraction in the city itself; Maria and Brown are assigned to steal a boat for their escape. Mallory and Miller find a way into the heavily fortified gun emplacements. Locking the main entrance behind them, Mallory and Miller set obvious explosives on the guns and hide more below the elevator leading to the guns. The Germans finally cut through the thick emplacement doors, but Mallory and Miller make their escape by diving into the sea. Despite Miller's inability to swim, they make it to the stolen boat, but learn that Pappadimos and Brown have been killed. Stavros is wounded and has difficulty swimming, but Mallory manages to pull him in.

The destroyers appear on schedule. The Germans remove the explosives planted on the guns and fire. The first salvo falls short. The next barely misses the lead ship, but then, just as they are about to fire again, the elevator descends low enough to trigger the hidden explosives. The guns and fortifications are destroyed in a spectacular explosion.

Mallory and Miller are taken on board the destroyer, while Stavros, who has fallen in love with Maria, decides to return to Navarone with her and shakes hands with Mallory, seemingly having given up his plan to kill him.

's acclaimed score for the film blended Greek melodies with his usual retinue of sweeping musical themes. 's also included two versions of lyrics set to Tiomkin's main tune telling the story of the film in mode under the title "The Guns of Navarone". The names of the film's characters can be heard sung in the lyrics over the closing credits.

A number of musicians have subsequently borrowed from the score, including:

*' and 's instrumental "The Guns of Navarone" (1964) is based on the film's main theme, which can be heard during the opening titles. The song has also been performed by reggae and ska bands such as Jamaican reggae Lee 'Scratch' Perry's Upsetters and Finnish ska group , 80s British ska group , Newfoundland Reggae/ska group the and another ska group . [ [http://www.amazon.com/History-Blue-Beat-Reggae-Vol/dp/B000001PXM Amazon.com: The History of Ska, Blue Beat, & Reggae, Vol. 1: Music: Various Artists ] ]

*The guitar riff from 's "Fields of Fire" was lifted from "The Guns of Navarone" theme. [ [http://www.trouserpress.com/entry.php?a=big_country TrouserPress.com :: Big Country ] ]

In the 1994 Quentin Tarantino Film "", Jules mentions the film in a quote: "Every time my fingers touch brain, I'm Superfly T.N.T., I'm the Guns of the Navarone!"

paid homage to the film in the song with the lyric, "Guns of Navarone/ Tearing up your battle zone."