Directors Guild of America (DGA) is an entertainment labor union which represents the interests of film and television directors in the United States motion picture industry. Founded as the Screen Directors Guild in 1936, the group became the DGA in 1960.

The Guild has various training programs whereby successful applicants are placed in various productions and can gain experience working in the film or television industry.

As of 2011[update], the guild had about 14,500 members.[2] The DGA headquarters are located on Sunset Boulevard in Hollywood, with satellite offices in New York and Chicago,

The agreements signed between the Guild and film production companies make various stipulations covering pay and working conditions for Guild members, and require that all those employed in the relevant fields on a film made by that company are Guild members. Guild members are generally prevented from working for companies that have not signed an agreement with the DGA. This sometimes leads production companies which have no such agreement to form new companies, purely for the purpose of making a particular film, which do then sign an agreement with the DGA.

Not all Hollywood directors are DGA members. Notable directors such as George Lucas, Quentin Tarantino, and Robert Rodriguez have refused membership or resigned from the guild over specific differences.[citation needed] Those who Aren't members of the guild are unable to direct for the larger movie studios, which are signatories to the guild's agreements that all directors must be guild members.

Other than wages and basic working condition the DGA has a particular role in protecting the creative rights of the film director. Such protections that the guild provides include defining the director's role, guarding the key concept of "one director to a picture" and the right to prepare a director's cut or edit. Generally each of these protections is to help offset the power that producers can have over a director during the filmmaking process. The Guild is also notable for having blocked the attempts of non-DGA members from participating in directing various projects, notably stopping Quentin Tarantino from directing an episode of the The X-Files entitled "Never Again".[3]

The rule that a film can only have one single director, adopted to avoid producers and actors lobbying for a director's credit, is strongly defended by the DGA and is only waived for recognized directorial teams (as determined by the DGA) such as The Wachowskis, Hughes brothers, Brothers Strause, and the Coen brothers. The Coens for years divided credit, with Ethan taking producing credit, Joel taking directing credit, and both of them sharing the writing credit (even though the two of them shared all three duties between themselves) until The Ladykillers. For instance, the DGA would not recognize Robert Rodriguez and Frank Miller as a directorial "team" for Sin City, which resulted in Rodriguez quitting the DGA so that Miller would receive director's credit.[citation needed]

Presidents of the Screen Directors Guild and the DGA 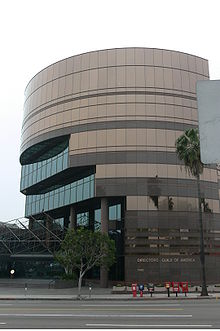