A film director is a person who directs the actors and film crew in filmmaking.[1] They control a film's artistic and dramatic aspects, while guiding the technical crew and actors.

Directors are responsible for overseeing creative aspects of a film under the film producer. They often develop the vision for a film and carry the vision out, deciding how the film should look, in other words they make their vision come to life. They are responsible for turning the script into a sequence of shots. They also direct what tone it should have and what an audience should gain from the cinematic experience. Film directors are responsible for deciding camera angles, lens effects and lighting with the help of the cinematographer, and set design with the production designer. They will often take part in hiring key crew members. They coordinate the actors' moves, or blocking, and also may be involved in the writing, financing, and editing of a film.

The director works closely with the cast and crew to shape the film. Some like to conduct rigorous rehearsals in preproduction while others do so before each scene. In either case, this process is essential as it tells the director as well as other key members of the crew (director of photography, stunt choreographer, hair stylist, etc.), how the actors are going to play the scene, which enables them to make any necessary adjustments. Directors often use storyboards to illustrate sequences and concepts, and a director's viewfinder to set up camera angles.

The director also plays a key role in post-production. He or she works with the editor to ensure that the emotions of the scene and the close ups, mid shots and wide or long shots appropriately reflect which character is driving the narrative. The director also advises on the (color) grading of the final images, adding warmth or frigidity to the composition of the shots to reflect the emotional subtext of the character or environment. The director will sometimes participate in the sound mix and musical composition of the film. 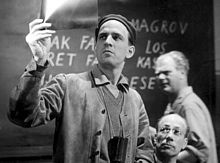 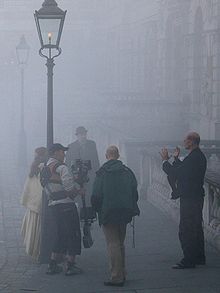 The film director, on the right, gives last minute direction to the cast and crew, while filming a costume drama on location in London. 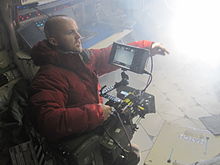 Directors have different methods of filming. Some styles include:

A new director working on feature films might earn as much as $200,000 a year, while the most successful can earn over $500,000 or even millions per film in some cases.[2]