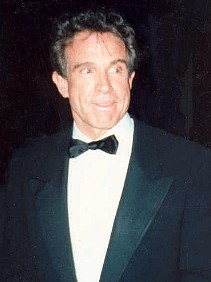 Beatty was born in 's, Bellevue neighborhood. His mother, Kathlyn Corinne (née MacLean), was a -born drama teacher, and his father, Ira Owens Beaty, was a professor of psychology, as well as public school administrator and agent. [ [http://www.newenglandancestors.org/education/articles/research/special_guests/gary_boyd_roberts/gbr83.asp New England Historic Genealogical Society ] ] [ [http://www.filmreference.com/film/59/Warren-Beatty.html Warren Beatty Biography (1937-) ] ] Beatty's grandparents were also teachers. The family was . [ [http://www.adherents.com/people/pb/Warren_Beatty.html The religion of Warren Beatty, actor, director ] ] [ [http://www.berkeley.edu/news/media/releases/2005/05/21_beatty.shtml Actor Warren Beatty gives public-policy graduates — and Gov. Schwarzenegger — some advice on power ] ] His father moved the family from Richmond to and then to where he became a middle school principal. The family also lived in in the 1930s. Beatty's sister, three years his senior, is the multi-award winning actress and writer .

Beatty was a star player at , in . Encouraged to act by the success of his sister, who had recently established herself as a Hollywood star, he decided to work as a stagehand at the National Theater in Washington, D.C., during the summer prior to his senior year. This enabled him to establish contact with a few famous actors. Upon graduation from high school, he turned down 10 football scholarships to enroll in drama school.

He studied acting and directing at the school of drama. While at Northwestern, he appeared in the annual . He is a member of the Fraternity. He dropped out after his freshman year to enroll in 's Conservatory of Acting in . By the age of twenty-two, Beatty had appeared in about forty productions. He garnered a best actor nomination in 1960 for his performance in 's drama "A Loss of Roses". It was to be his only appearance on the Broadway stage.

Beatty started his career making appearances in television series such as "Studio One" (1957), "" (1959), and "" (1959). He made his film debut under Elia Kazan's direction and opposite in "" (1961). The film was a box office success and Beatty was nominated for a in the category Best Motion Picture Actor - Drama.Subsequently he appeared in several films which went relatively unnoticed. Then, at age 30, he achieved critical acclaim and power as a producer and star of "Bonnie and Clyde" (1967) which was nominated for 10 Academy Awards.

Because of his work on "Bonnie and Clyde" (1967), Beatty is generally regarded as the precursor of the generation, which included such filmmakers as , , and .

Afraid of being typecast as a milquetoast leading man, and still smarting over the "" debacle, where he was outmaneuvered by and eventually forced to leave the production, Beatty produced "Bonnie and Clyde" as a means of controlling the projects he was involved with. He hired the untested writers and , as well as director , and controlled every facet of production, including cast, script and final cut of the film, as he would throughout the rest of his career, be it as producer/director or only as producer. (It should be noted that, in "", it was Beatty, the producer, who had final cut on the film, not , the director.)

"Bonnie and Clyde" became a blockbuster and cultural touchstone for the youth culture of the era. The film, along with "", marked the beginning of the so-called era, where studios gave unprecedented freedom to filmmakers to pursue their own idiosyncratic vision.

Subsequent Beatty films include "" (1971), "" (1974), "Shampoo" (1975), and "Heaven Can Wait" (1978). The last two films gave him box-office power, making forty-nine and eighty-one million dollars, respectively. He used this to make his long in the works (he had started doing research and some filming as far back as 1970) "Reds" (1981), an historical epic about famed Communist journalist John Reed in the Russian . Beatty is one of the few people ever to receive Oscar nominations in the Best Picture, Actor, Directing and Writing categories from a single film. This feat is all the more impressive since Beatty achieved it twice. He was nominated for all four awards for his film "Heaven Can Wait" (1978) but won none of them; he was nominated a second time for all four awards for his film "Reds" (1981), winning the Directing Award. Beatty received additional nominations for Best Picture and Best Actor in both "Bonnie and Clyde" (1967) and "" (1991). He was also nominated two other times for : in 1975 for "Shampoo" and in 1998 for "".

After a six year hiatus, he returned in 1987 starring alongside in the big-budget "Ishtar", which was critically panned and is regarded as one of the biggest s in film history. In 1990, he bounced back when he produced, directed and starred in the title role as the character in the film of the same name. The film was one of the highest grossers of the year and was also the highest-grossing film in Beatty's career to that point. He failed to repeat the box-office success of "Dick Tracy" in subsequent films.

In 1991 he starred as the real-life gangster in the "" which was critically acclaimed and made almost fifty million dollars at the U.S. box-office. His following film "Love Affair" (1994) failed to do well. In 1998 he wrote, produced, directed and starred in the "" which was critically appreciated gaining him another nomination for Best Original Screenplay. In 2001, he appeared in his last film to date, "Town and Country", which became the second-largest money loser of any movie ever made (after "") based on contemporary dollars lost: [ [http://www.the-numbers.com/movies/records/budgets.php www.thenumbers.com] ] it was made on a budget of approximately USD$90 million, but earned only $6.7 million domestically. Since then, Beatty has not acted in any films but has expressed interest in returning to cinema.

In May 2005, Beatty sued for $30 million in damages, claiming he still maintains the rights to "Dick Tracy". Beatty received the rights in 1985 and is now claiming that 17 years later Tribune moved to reclaim them in violation of various notification procedures. "Dick Tracy" grossed over $100 million upon its release in 1990, making it the highest grossing film of Beatty's career. There was talk of a , and Beatty did express interest in reprising the part, but the sequel was sidelined by unexpected legal disputes.

In 2006, Beatty was named Honorary Chairman of the Studio of Acting, succeeding Marlon Brando. In 2007, the awarded Beatty the Cecil B. DeMille award, presented at the Golden Globe ceremony by .

Beatty is also on the Board of Trustees at .

A longtime activist in various liberal political causes, Beatty has, at various times, been extremely active in the presidential politics of the Democratic Party. In 1968, he hit the campaign trail for the first time, supporting Senator 's bid for his party's presidential nomination. His involvement in the senator's campaign, which included stump speaking and fundraising, was cut short when Kennedy was shot and killed by on the same night that he won a crucial primary in .

Four years later, Beatty joined the campaign of Senator as an advisor. As part of the so-called "Malibu Mafia," a group of Hollywood celebrities who were part of the candidate's "inner circle," Beatty gave McGovern's campaign manager advice about the handling of public relations and was instrumental in organizing a series of rock concerts which raised over $1 million for the senator's campaign.

In 1984, and again in 1988, Beatty was to play a similar role in Hart's own presidential campaigns. Hart, who had, by that time, become a senator himself, had become friends with Beatty during the 1972 campaign and the relationship had grown closer during the intervening decade. After Hart's second campaign imploded over allegations that he had committed adultery with a former beauty queen named , a mutual friend of the two explained why they were so close: "Gary always wanted to have Warren's life and Warren always wanted to have Gary's. It was a match made in heaven."

Beatty himself was to become presidential timber during the summer of 1999 . After it became clear that the only two contenders for the Democratic Party's nomination were to be Vice President and former Senator of , Beatty made it generally known that he was dissatisfied with the two choices and began to drop hints that he might be willing to seek the nomination himself. After meeting with several powerful liberal activists and influential Democratic operatives, including pollster , who had worked previously for Hart, McGovern, California governor Jerry Brown and President , and adman , who had worked on the campaigns of Senator and Governor , Beatty announced in September 1999 that he would not seek the nomination. However, he continued to be courted by members of a different political party, the Reform Party, who were looking for an alternative to , a conservative who had switched parties after losing the Republican Party's presidential nomination for the third time in a row. Despite frequent entreaties by Governor Ventura, real-estate magnate , and syndicated columnist , Beatty refused to enter the race and Buchanan eventually won the Reform Party's nomination.

Despite his decision not to seek the presidency in 2000, Beatty intimated that he might still run at a later time, telling reporters that he would do so if he thought he "could make an impact on the debate". As governor ' popularity with California voters dropped, Beatty campaigned against the 2003 special election. He was the keynote speaker at the 's 2005 convention, and recorded radio ads urging voters to reject Governor Schwarzenegger's ballot proposals. The propositions were defeated at the ballot box, increasing speculation that Beatty may run against Schwarzenegger in the 2006 election. But, in early 2006, Beatty announced he would not seek the Democratic gubernatorial nomination.

Beatty's anticipated run for president in 2000 was lampooned by in his strip . In it, the character B.D. is shocked when his wife gets a campaign contribution envelope - the joke being that Beatty could generate millions of dollars by having each of his former conquests send in a dollar to his campaign fund. When the crestfallen B.D. asks her why she dated him, she answered, "Well, it was the '70s. It was kind of like cocaine...you'd meet a girl in the bathroom who'd say, 'So, have you tried Warren Beatty?'

Beatty also made his political views known through his character, Senator Bulworth, in the movie of a similar name. Many of the character's views closely mirror Beatty's actual political beliefs.