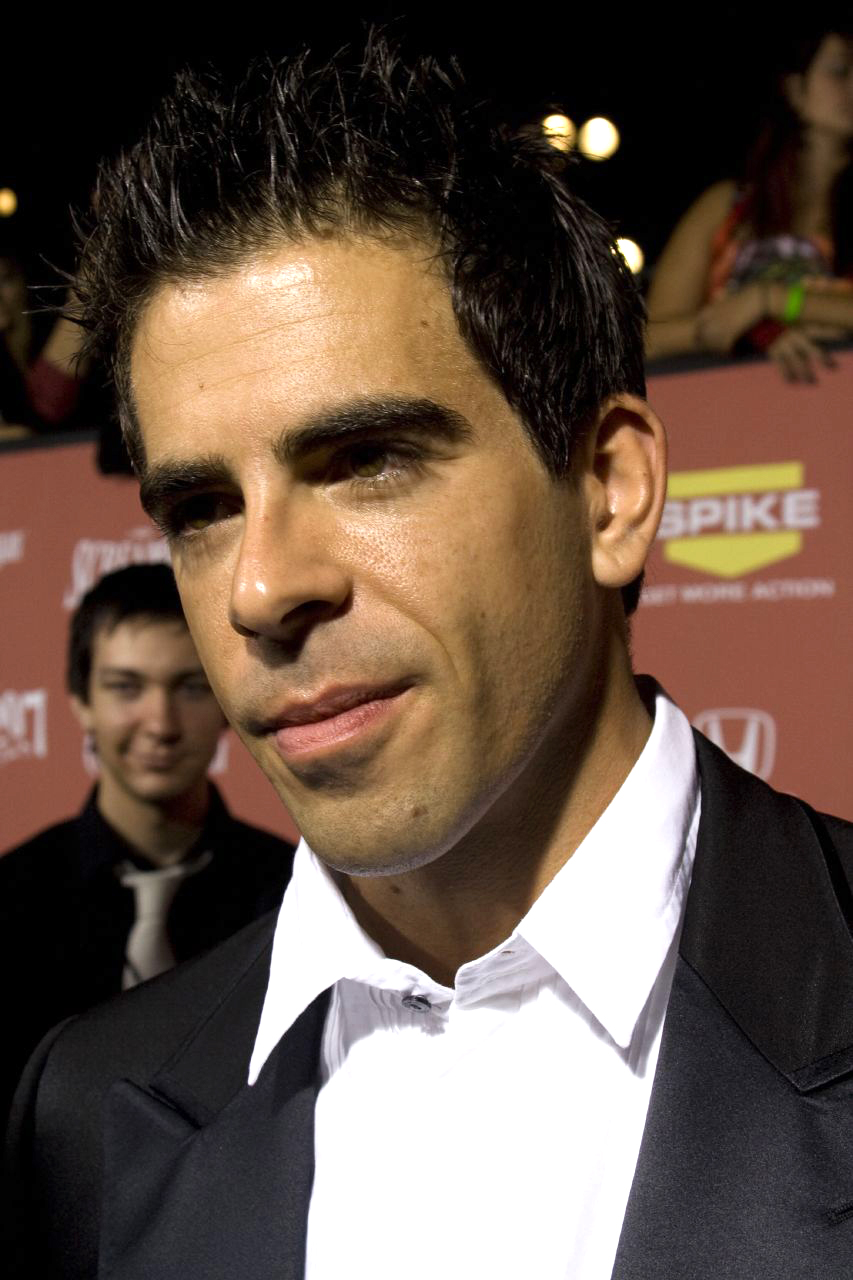 Eli Raphael Roth (born , ) is an American , producer, and . He has been dubbed the leader of a group of filmmakers dubbed the , because of their association and their focus on the horror genre. Roth is known for making extremely violent, low-budget horror box office hits, and has made himself a household name without any major stars in his films. Bloggers widely credit with bringing back R rated horror films to theaters at a time when studios would only make films that were PG-13. The total budget of his first three films is $16 million dollars, and the total worldwide box office of his first three films is $150 million dollars, making him one of the most profitable directors working today. He has never lost money on a film.

Roth was born in to Dr. Sheldon Roth, a / and professor at ,

Roth began shooting films at the age of eight after watching 's "Alien" (1979).

By the age of 20, and while still a student at NYU, Roth was an intern/office manager/development head for producer Frederick Zollo, eventually leaving to devote himself to writing full-time.

After chatting together at her mother's , actress gave Roth one of his first jobs in Hollywood, putting him on as an extra on "" when he first moved to . (Roth had originally met Manheim in NYC at a 1993 premiere.)fix|link=Wikipedia:Contents|text=citation neededRoth would stay in Manheim's dressing room working on his scripts while she filmed the show. Roth also met Manheim's cousin Howie Nuchow (former EVP of Mandalay Sports Entertainment and also from the Boston, MA area) at this same seder -- this led to Roth's two animation projects in the years that followed. Roth also co-wrote a project called "The Extra" with Manheim; Manheim would later sell the pitch to producer (and former CEO and Chairman of Fox Studios) Bill Mechanic's Pandemonium company.

In his final years (1993/1994) at NYU film school, Roth wrote and directed a student film called "Restaurant Dogs" as an homage to Quentin Tarantino's "Reservoir Dogs". The film was nominated for a Student Academy Award in 1995, and won its division (Division III.)

Through his internship with producer Fred Zollo in years prior, Roth met , and Roth remained in contact with Lynch over the years, eventually producing content for Lynch with his fledgling website in the late 1990s. Roth met film and TV composer through Lynch; Roth would later use Badalamenti's music in his first feature film. Roth also met a member of special effects company through Lynch; KNB EFX would later contribute to his first feature.

Roth moved from NYC to LA in 1999; shortly thereafter Roth wrote, directed, edited, produced, animated, and provided voices for a series of animated shorts called "Chowdaheads" for Mandalay Sports Entertainment. The shorts were intended to be shown between WCW Monday Nitro pro wrestling matches, but the C.E.O. of WCW who had green lit the project was fired the weekend before they were supposed to be aired, and they were never actually broadcast, despite being completed. Roth's friend Noah Belson co-wrote the shorts and provided additional character voices.

After receiving $40,000 from the website to deliver a 5-minute pilot, Roth wrote, directed, animated and produced a series of stop-motion shorts in mid-2000 called "The Rotten Fruit". The company () folded shortly after several episodes were completed, and the domain name was picked up by Nissan years later to promote their sports car of the same name. A portion of the work for "The Rotten Fruit" was done at the Snake Pit studios in Burbank using miniature sets, poseable clay and foam figures, two high-end digital still cameras, and a pair of computers. Roth's friend Noah Belson co-wrote the shorts and provided additional character voices.

In 1995, a year after graduating from NYU, Roth co-wrote "Cabin Fever" with his roommate and friend from NYU Randy Pearlstein. Roth based the premise of the script on his own encounter with an allergy he contracted while training horses at a farm in Selfoss, Iceland, in 1991. Much of the script was written while Roth was working as a production assistant for 's movie ""; Stern remembered and congratulated Roth on his radio show. fix|link=Wikipedia:Contents|text=citation needed

Roth's second feature film, "Hostel", was made on a budget of a little more than $4 million, in 2005. It opened to #1 at the box office in January 2006, taking in $20 million dollars opening weekend, and knocking out "" from the #1 spot (although it was the 5th weekend for Narnia, which still managed to gross $16 million). It went on to gross $80 million worldwide in box office, and over $180 million worldwide on DVD. In April 2006, on Eli Roth's birthday, "Hostel" opened on DVD at #1, again outselling "The Chronicles of Narnia", which had opened at the #1 sales slot only one week prior. The movie takes place in , where three college students visit a hostel, where they think that all of their sexual fantasies will come true. Instead, they find an international syndicate with the express purpose of torturing and killing backpackers for the sadistic pleasures of rich businessmen. The film pushed the boundaries of realistic violence and was voted the #1 scariest movie moment on the Bravo TV special "100 Scariest Movie Moments: Even Scarier Moments". readers voted the "Hostel" Best Horror Film of 2006. In October 2007 H.M.V. stores annual horror poll ranked "Hostel" as one of the ten scariest horror films of all time. It was the only film on the list made after 1988.

Roth reportedly turned down numerous studio directing jobs to make "Hostel." Roth took a directing salary of only $10,000 on "Hostel" in order to keep the budget as low as possible, so there would be no limitations on the violence. Roth shot the film as an movie, but the film passed through the ratings board with an .

In 2007, Roth directed the faux trailer segment "Thanksgiving" for "Grindhouse", in addition to appearing in "Death Proof", 's segment of the film. Roth and co-writer Jeff Rendell won a 2007 for Best Screamplay for their writing in "Grindhouse," sharing the award with , , , and .

While "" did not produce the same box office results as the first "Hostel," the production costs were an astounding $10 million dollars, and earned close to $30 million dollars worldwide within three weeks of its release - when it was removed from theaters domestically. The film was nominated for six "Scream Awards," more than any other horror film that year. Roth was nominated for Best Director, and along with singer introduced the grand finale of the show, an all star tribute to .

Roth is working on other film projects, including an adaptation of the novel "Cell". He also talked about doing a film called "Trailer Trash"; a film made of fake trailers; according to an appearance on . Roth confirms that MGM will be releasing Trailer Trash on August 22 2008, Roth was quoted saying "Trailer Trash is not a horror film, it's a comedy. It will be very R-rated and completely insane, and I'm producing it with ".

He is currently producing a movie entitled . It is being written, directed, and scored by , who stars in the the film. , is said to be involved with the movie as well. In a recent interview with CHUDD, Eli spoke on the movie:

cquote| This movie will have everything martial arts fans could want, combined with RZA's superb musical talent. This project has been his dream for years, and I'm thrilled to be a part of it. And fans should know that yes, there will be blood... This ain't no PG-13. [http://www.411mania.com/movies/news/79684/ [Movies] -Eli-Roth-On-RZA/s-The-Man-With-The-Iron-Fist.htm] [http://chud.com/articles/articles/15467/1/ELI-ROTH-GIVES-CHUD-THE-SCOOP-ON-RZA039S-MARTIAL-ARTS-MOVIE/Page1.html]

Roth has been a guest on "Jimmy Kimmel Live," "Your World Today with Neil Cavuto," "The Howard Stern Show," "Late Night With Conan O'Brien," and served as a guest judge on the filmmaking reality series "On The Lot." He has been profiled and interviewed in the New York Times, G.Q., Elle Magazine, Maxim, Le Monde, La Republica, Time Out: London, Time Magazine, Empire Magazine, Premiere, and Italian Vogue. Dolce & Gabbana and Nike give him clothes for all his public appearances. Roth has also appeared three times as an answer in the New York Times Sunday crossword puzzle.

"Men's Fitness" magazine voted Roth Most Fit Director in their July 2006 issue, a title Roth takes very seriously with a strict workout routine that he documents on the "Hostel" DVDs. Roth claims he treats every red carpet like it was a Milan runway, and often jokes that he only makes films as a way to live out his lifelong dream of being a male supermodel. He spoke of his love for fashion in his interview in the October 2007 issue of Italian Vogue.

Roth also participated in the 2006 animated comedy film, Disaster!, voicing the lumberjack during the opening moments of the film. The comical 'death by squirrels' the lumberjack suffers is inspired by Roth's gruesome and often ironic ways of killing characters in his own films.

Roth participated in a DVD for "" in 1996, having no formal credits, as a "Blood and Guts Expert." The DVD is one of the highest selling DVDs for . Roth often makes uncredited cameos in Troma films, thanks to NYU friend Gabe Friedman, a former editor also hailing from the Boston, MA area.

Roth had a role in Quentin Tarantino's half of "Grindhouse", "Death Proof", in a scene with Jordan Ladd. Tarantino was so impressed by Roth's brief role as Justin in "Cabin Fever," he asked Roth to audition for the film. Roth left his preproduction on "Hostel Part II" in Prague to fly to Austin Texas for one week to film the scene at the Texas Chili Parlor. Roth said working as an actor for Tarantino was like taking a masterclass in directing, and said the only directors he would ever act for were people who had won the Palme D'Or at Cannes. Roth also made appearances in several projects that David Lynch directed for Davidlynch.com.

Eli Roth brought the now-infamous "Raiders of the Lost Ark" shot-for-shot remake by kids to the attention of both Harry Knowles and Steven Spielberg. Roth had a copy in his collection of videos for years before showing it at Harry Knowles' butt-numb-a-thon film festival in December, 2002. The response was so overwhelming that Roth took the tape to his very first meeting at Dreamworks, and gave it to an executive to give to Steven Spielberg. The executive called Roth the next week saying that Spielberg loved it and wanted to contact the filmmakers. Roth had never met the filmmakers, but Google searched every name in the credits until he got a hold of Jayson Lamb, the cinematographer. The three filmmakers, Lamb, Chris Strompolis, and Eric Zala (a former Activision employee) had not spoken to each other in years when Roth contacted them out of the blue, saying that Spielberg wanted to write them a letter. This reunited the friends, who began touring the world doing charity screenings with the film. Roth felt that the film was so powerful he had to do whatever he could to make sure fans around the world saw it. Roth introduced the film at its premiere at Mann's Chinese Theater in May of 2008, five and a half years after he first got the tape to Knowles and Spielberg.