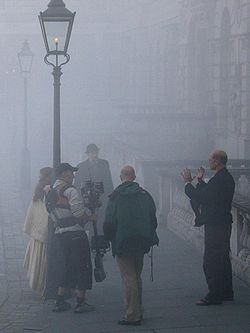 A film crew with a steadycam sets up a take of a costume drama set in London, England

A costume drama or period drama is a period piece in which elaborate costumes, sets and properties are featured in order to capture the ambiance of a particular era.

The term is usually used in the context of film and television. It is an informal, crossover term that can apply to several genres but is most often heard in the context of historical dramas and romances, adventure films and swashbucklers. The implication is that the audience is attracted as much by the lavish costumes as by the content.

The most common type of costume drama is the historical costume drama, both on stage and in movies. This category includes Barry Lyndon, Braveheart, From Hell, and Robin Hood. Films that are set in the 1930s and 1940s, such as Last Man Standing, may also be placed in this category. Other examples include Marie Antoinette, Middlemarch, and Pride and Prejudice.

There have been highly successful television series that have been known as Costume Dramas/Period Pieces. Notable examples include Mad Men, Boardwalk Empire, Downton Abbey, Deadwood, Dr. Quinn Medicine Woman, Little House on the Prairie, and Freaks and Geeks. There have been shows that used the effects of a costume drama/period piece because it is set in a particular era of time but, although this is true the focus of these shows are actually based around a different genre. Examples of these are Xena: Warrior Princess, Legend of the Seeker, and That 70's Show.