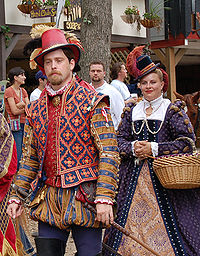 The term costume can refer to wardrobe and dress in general, or to the distinctive style of dress of a particular people, class, or period. Costume may also refer to the artistic arrangement of accessories in a picture, statue, poem, or play, appropriate to the time, place, or other circumstances represented or described, or to a particular style of clothing worn to portray the wearer as a character or type of character other than their regular persona at a social event such as a masquerade, a fancy dress party or in an artistic theatrical performance. 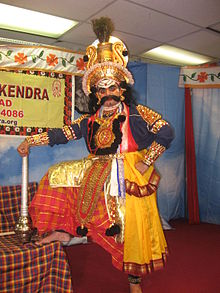 One of the more prominent places people see costumes is in theatre, film and on television. In combination with other aspects, theatrical costumes can help actors portray characters' age, gender role, profession, social class, personality, ethnicity, and even information about the historical period/era, geographic location and time of day, as well as the season or weather of the theatrical performance. Often, stylized theatrical costumes can exaggerate some aspect of a character; for example Harlequin and Pantaloon in the Commedia dell'arte.

National costume or regional costume expresses local (or exiled) identity and emphasises a culture's unique attributes. It is often a source of national pride. Examples of such are a Scotsman in a kilt or a Japanese person in a kimono.

The wearing of costumes has become an important part of such holidays and festivals as Mardi Gras and Halloween (see Halloween costume for more information), and (to a lesser extent) people may also wear costumes in conjunction with other holidays, such as Christmas and Easter. Mardi Gras costumes usually take the form of jesters and other fantasy characters, while Halloween costumes traditionally take the form of supernatural creatures such as ghosts, vampires, pop culture icons and angels. Christmas and Easter costumes typically portray mythical characters such as Santa Claus (by donning a santa suit and beard) or the Easter Bunny by putting on an animal costume. Costumes may serve to portray various other characters during secular holidays, such as an Uncle Sam costume worn on the Independence day for example.

In Judaism, a common practice is to dress up on Purim. The Jews celebrate the change of their destiny. They were delivered from being the victims of an evil decree against them and were instead allowed by the King to destroy their enemies. A quote from the Book of Esther, which says: "On the contrary" (hebrew: ונהפוך הוא ) is the reason that wearing a costume has become so popular among the Jews on this holiday.

Costumes also serve as an avenue for children to explore and roleplay. Children can dress up in various forms; for example characters from history or fiction like pirates, princesses or cowboys, common jobs like nurses or police officers, or animals such as those seen in zoos or farms.

Another very popular situation where costumes are employed are for sporting events, where people dressed as their team's representative mascot help the club or team rally round their team's cause. Animal costumes which are visually very similar to mascot costumes are also popular among the members of the furry fandom where they are referred to as fursuits.