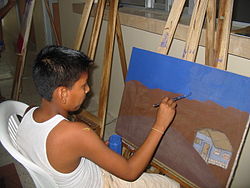 A sleeveless shirt, singlet or vest, also known as a wife-beater (Australia/USA), is a shirt manufactured without sleeves, or one whose sleeves have been cut off. Sleeveless shirts are worn by either gender, depending on the style. Tank tops are often worn by athletes in sports such as track and field and triathlon. Tank tops have been popular warm-weather casual wear in the United States since the 1970s,[citation needed] and are regarded as acceptable public casual dress in most warm weather locales. They are mostly preferred in hot climates, since the arm holes provide ventilation and the thin fabric provides comfort. The term wife-beater is commonly used to refer to the tank tops worn by males. However, in rural American vernaculars, it has the particular meaning of a t-shirt which has had the sleeves cut off, often roughly, as if with garden shears.

In American English, a tank top is a sleeveless garment that can be worn by either gender. It is often worn under the shirt as underwear, although more colorful and well-designed tank tops are usually worn as an outer shirt. The term is also used in Australian English, although the term singlet is usually used to refer to the garment, which likewise is an unused term in American English. In British English, the term vest is used, while tank top refers to a sleeveless pullover. The name tank top, recorded in English since 1968, is derived from its resemblance to a tank suit, a style of one-piece women's swimsuit with shoulder straps. Its name derives from the 1920s term swimming tank, which is an obsolete term for what is now called a swimming pool. The tankini – a portmanteau of the words tank top and bikini – is a women's swimming version of the tank top. 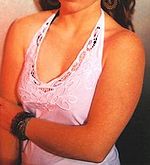 A woman in a halter top
Main article: Halterneck

A halter top is a sleeveless shirt in which a strap goes around the back of the neck, leaving the upper back uncovered. Halter tops are worn mainly by girls and women.

A spaghetti-strapped shirt is a tank top with strings or thin material on the shoulders to hold up the shirt. It is thought to have originated in 1920s England, and made fashionable by rich upper class men[citation needed], but is now worn mainly by girls and young women. Also referred to as a vest top in British English.

A camisole is a sleeveless shirt for women, normally extending to the waist. The camisole is usually made of satin, nylon, or cotton. 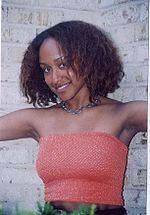 A woman in a tube top
Main article: Tube top

A tube top is a shirt with no sleeves or shoulders, and is, basically, a tube that wraps around a woman's torso. In Great Britain and Australia, it is called a "boob tube" (not to be confused with the identical American slang for television set).

A T-back shirt is a tank top that is much narrower in the back than the front. The style for women varies greatly from those worn by men (primarily weightlifters). Female T-back shirts cover more of the back, are less narrow, and come together higher up the back, in general. Male shirts are designed to expose the shoulder blades, useful for men at the gym. 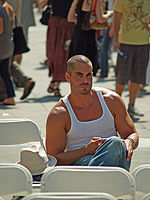 A man wearing an A-shirt

The etymology of the term "A-shirt," which is preferred by manufacturers,such as Hanes, is uncertain. Some[who?] claim that it is short for "athletic shirt" because it is often worn in sports, such as basketball and track-and-field events, while others[who?] say that it refers to the "A" shape when laid out flat (compare the origin of the word "T-shirt"). In the United States, it is also known colloquially as a wife beater, Guinea tee, or Dago tee (from guinea and dago, ethnic slurs against Italians).[citation needed] In British English an A-shirts is known as a vest.[1] (compare American usage of "vest".) In India, it is referred to as Baniyaan, Ganji. In Scots vernacular it is referred to as a semmit,[2] and as a singlet in Ireland, Britain, Australia, and New Zealand. In Colombia it is known as a busca pleitos meaning trouble seeker, in reference to its usage by violent individuals.[citation needed] In Spain they used to be called camiseta imperio (Imperial t-shirt).

In addition to athletic usage, A-shirts have traditionally been used as undershirts, especially with suits and dress shirts. They are sometimes worn alone without a dress shirt or top shirt during very warm and or humid weather; mainly in North America where the climate is warmer and more humid in the Summer. A-shirts may be worn alone under very causal settings, as lounge wear, and or while completing yardwork or other chores around the home.

The build of an A-shirt is simple: the neck and armholes are often reinforced for durability. One usually has large armholes and neck holes and a neckline that can reach down as far as mid-chest. They are also sometimes made long to make tucking into a pair of pants easier. In almost all cases, they are buttonless, collarless, and pocketless. An A-shirt is designed for a tight fit and made of ribbed cotton or other fiber.

The string vest has fallen from favour in the United Kingdom,[3][4] but a string semmit as an underclass fashion item was made famous by Rab C. Nesbitt, leading character in the TV sitcom of the same name.[5]

In places like Venice Beach, Miami Beach bodybuilders used to take regular t-shirts and rip them by hand, forming improvised tank tops. The result was a shirt that allowed them to watch their muscles in the mirror as they worked out and provided plenty of unrestricted freedom of movement. That’s why some sport company creates a special tank top with this characteristics it is called String Tank Top or Stringer Tank Top.

A sleeveless T-shirt, also called a muscle shirt and colloquially called a shooter shirt by basketball players, is the same design as a T-shirt, but without sleeves. They are primarily worn by men since the large open sleeve holes would expose the female breast under certain circumstances. They are often worn for/during athletic activities. They were quite popular in the 1980s and were stereotypically associated with surfers and body-builders (hence the name "muscle" shirt) who often bore the logo of their gyms on these shirts. Also called "Tenement T-shirt".