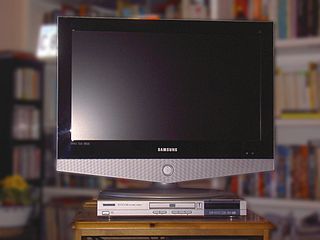 A television set ( also called a television, TV set, Telly, or TV) is a device that combines a tuner, display, and speakers for the purpose of viewing television. Television sets became a popular consumer product after the Second World War, using vacuum tubes and cathode ray tube displays. The addition of color to broadcast television after 1953 further increased the popularity of television sets, and an outdoor antenna became a common feature of suburban homes. The ubiquitous television set became the display device for the first generation of home computers.

Modern television sets incorporate liquid-crystal flat-screen displays, solid-state circuits, microprocessor controls and can interface with a variety of video signal sources, allowing the user to view broadcast and subscription cable TV signals or Satellite television, recorded material on DVDdisks or VHS tape, or less common devices such as home security systems, and even over-the-air broadcasts received through an indoor or outdoor antenna. 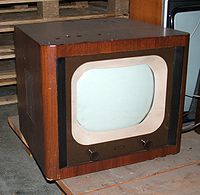 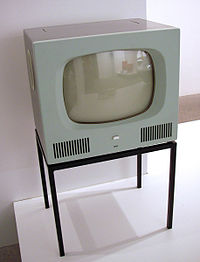 Mechanical televisions were commercially sold from 1928 to 1934 in the United Kingdom,[2] United States, and Russia.[3] The earliest commercially made televisions sold by Baird in the UK in 1928 were radios with the addition of a television device consisting of a neon tube behind a mechanically spinning disk (patented by German engineer Paul Nipkow in 1884, see Nipkow disk) with a spiral of apertures that produced a red postage-stamp size image, enlarged to twice that size by a magnifying glass. The Baird "Televisor" was also available without the radio. The Televisor sold in 1930–1933 is considered the first mass-produced television, selling about a thousand units.[4]

An estimated 19,000 electronic televisions were manufactured in Britain, and about 1,600 in Germany, before World War II. About 7,000–8,000 electronic sets were made in the U.S.[12] before the War Production Board halted manufacture in April 1942, production resuming in August 1945.

Television usage in the United States skyrocketed after World War II with the lifting of the manufacturing freeze, war-related technological advances, the gradual expansion of the television networks westward, the drop in television prices caused by mass production, increased leisure time, and additional disposable income. While only 0.5% of U.S. households had a television in 1946, 55.7% had one in 1954, and 90% by 1962.[13] In Britain, there were 15,000 television households in 1947, 1.4 million in 1952, and 15.1 million by 1968.[citation needed]

By the early 1970s, color television had come into wide use.[citation needed]

Modern televisions consist of a display, antenna or radio frequency (RF) input (a TV aerial plug or an F connector), and a tuner. The existence of a television tuner (nowadays, a digital television tuner) in a display device distinguishes it from a video monitor — which receives signals that are already processed. Additionally TVs almost always include speakers and teletext. Most modern TVs also feature additional inputs for devices such as DVD players, video game consoles, and headphones; the most common types for analog audio and analog video are RCA (for composite video and component video), mini-DIN for S-Video, SCART and D-terminal can be found in Europe and Japan respectively, the newer HDMI (which can also connect to computers), USB and Bluetooth. Some high-end TVs have Ethernet ports to receive information from the Internet, like stocks, weather, or news. Most TVs made since the early 1980s also feature an infra-red sensor to detect the signals sent by remote controls.

An outdoor television set designed for outdoor use is usually found in the outdoor sections of bars, sports fields, or other community facilities. Most outdoor televisions use High-definition television technology. The screens are designed to remain clearly visible even in outdoor lighting. The screens also have anti-reflective coatings to prevent glare. They are weather-resistant and often also have anti-theft brackets. Outdoor TV models can also be connected with CD, DVD players and PVRs for greater functionality.[citation needed]