Satellite television is television programming delivered by the means of communications satellite and received by an outdoor antenna, usually a parabolic mirror generally referred to as a satellite dish, and as far as household usage is concerned, a satellite receiver either in the form of an external set-top box or a satellite tuner module built into a TV set. Satellite TV tuners are also available as a card or a USB stick to be attached to a personal computer. In many areas of the world satellite television provides a wide range of channels and services, often to areas that are not serviced by terrestrial or cable providers. 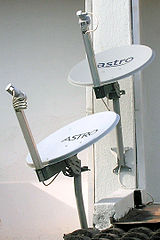 Satellites used for television signals are generally in either naturally highly elliptical (with inclination of +/-63.4 degrees and orbital period of about 12 hours, also known as Molniya orbit) or geostationary orbit 37,000 km (23,000 mi) above the earth’s equator.

Satellite television, like other communications relayed by satellite, starts with a transmitting antenna located at an uplink facility. Uplink satellite dishes are very large, as much as 9 to 12 meters (30 to 40 feet) in diameter. The increased diameter results in more accurate aiming and increased signal strength at the satellite. The uplink dish is pointed toward a specific satellite and the uplinked signals are transmitted within a specific frequency range, so as to be received by one of the transponders tuned to that frequency range aboard that satellite. The transponder 'retransmits' the signals back to Earth but at a different frequency band (a process known as translation, used to avoid interference with the uplink signal), typically in the C-band (4–8 GHz) or Ku-band (12–18 GHz) or both. The leg of the signal path from the satellite to the receiving Earth station is called the downlink.

A typical satellite has up to 32 transponders for Ku-band and up to 24 for a C-band only satellite, or more for hybrid satellites. Typical transponders each have a bandwidth between 27 MHz and 50 MHz. Each geo-stationary C-band satellite needs to be spaced 2 degrees from the next satellite (to avoid interference). For Ku the spacing can be 1 degree. This means that there is an upper limit of 360/2 = 180 geostationary C-band satellites and 360/1 = 360 geostationary Ku-band satellites. C-band transmission is susceptible to terrestrial interference while Ku-band transmission is affected by rain (as water is an excellent absorber of microwaves at this particular frequency). The latter is even more adversely affected by ice crystals in thunder clouds.

Last not least, there will be a sun outage when the sun lines up directly behind the geostationary satellite the reception antenna is pointing to. This will happen twice a year at around midday for a two-week period and affects both the C-band and the Ku-band. The line-up swamps out all reception for a few minutes due to the sun emitting microwaves on the same frequencies used by the satellite's transponders. This happens in the spring and in the fall.

The downlinked satellite signal, quite weak after traveling the great distance (see inverse-square law), can be collected by using a parabolic receiving dish, which reflects the weak signal to the dish’s focal point. Mounted on brackets at the dish's focal point is a device called a feedhorn. This feedhorn is essentially the flared front-end of a section of waveguide that gathers the signals at or near the focal point and 'conducts' them to a probe or pickup connected to a low-noise block downconverter or LNB. The LNB amplifies the relatively weak signals, filters the block of frequencies in which the satellite TV signals are transmitted, and converts the block of frequencies to a lower frequency range in the L-band range. The evolution of LNBs was one of necessity and invention.

The original C-Band satellite TV systems used a Low Noise Amplifier connected to the feedhorn at the focal point of the dish. The amplified signal was then fed via very expensive and sometimes 50 ohm impedance gas filled hardline coaxial cable to an indoor receiver or, in other designs, fed to a downconverter (a mixer and a voltage tuned oscillator with some filter circuitry) for downconversion to an intermediate frequency. The channel selection was controlled, typically by a voltage tuned oscillator with the tuning voltage being fed via a separate cable to the headend. But this design evolved.

Designs for microstrip based converters for Amateur Radio frequencies were adapted for the 4 GHz C-Band. Central to these designs was concept of block downconversion of a range of frequencies to a lower, and technologically more easily handled block of frequencies (intermediate frequency).

The advantages of using an LNB are that cheaper cable could be used to connect the indoor receiver with the satellite TV dish and LNB, and that the technology for handling the signal at L-Band and UHF was far cheaper than that for handling the signal at C-Band frequencies. The shift to cheaper technology from the 50 Ohm impedance cable and N-Connectors of the early C-Band systems to the cheaper 75 Ohm technology and F-Connectors allowed the early satellite TV receivers to use, what were in reality, modified UHF TV tuners which selected the satellite television channel for down conversion to another lower intermediate frequency centered on 70 MHz where it was demodulated. This shift allowed the satellite television DTH industry to change from being a largely hobbyist one where receivers were built in low numbers and complete systems were expensive (costing thousands of Dollars) to a far more commercial one of mass production.

Direct broadcast satellite dishes are fitted with an LNBF, which integrates the feedhorn with the LNB.

In the United States, service providers use the intermediate frequency ranges of 950-2150 MHz to carry the signal to the receiver. This allows for transmission of UHF band signals along the same span of coaxial wire at the same time. In some applications, (DirecTV AU9-S and AT-9) ranges the lower B-Band and upper 2250-3000 MHz, are used. Newer LNBFs in use by DirecTV referred to as SWM, use a more limited frequency range of 950-1800 MHz.

The satellite receiver or Set-top box demodulates and converts the signals to the desired form (outputs for television, audio, data, etc.). Sometimes, the receiver includes the capability to unscramble or decrypt the received signal; the receiver is then called an Integrated receiver/decoder or IRD. The cable connecting the receiver to the LNBF or LNB should be of the low loss type RG-6, quad shield RG-6 or RG-11, etc. RG-59 is not recommended for this application as it is not technically designed to carry frequencies above 950 MHz, but will work in many circumstances, depending on the quality of the coaxial wire.

A practical problem relating to satellite home reception is that basically an LNB can only handle a single receiver. This is due to the fact that the LNB is mapping two different polarizations - horizontal and vertical - and in the case of the K-band two different reception bands - lower and upper - to one and the same frequency band on the cable. Depending on which frequency a transponder is transmitting at and on what polarization it is using, the satellite receiver has to switch the LNB into one of four different modes in order to receive a specific desired program on a specific transponder. This is handled by the receiver using the DiSEqC protocol to control the LNB mode. If several satellite receivers are to be attached to a single dish a so-called multiswitch will have to be used in conjunction with a special type of LNB. There are also LNBs available with a multiswitch already integrated. This problem becomes more complicated when several receivers are to use several dishes (or several LNBs mounted in a single dish) pointing to different satellites.

A common solution for consumers wanting to access multiple satellites is to deploy a single dish with a single LNB and to rotate the dish using an electric motor. The axis of rotation has to be set up in the north-south direction and, depending on the geographical location of the dish, have a specific vertical tilt. Set up properly the motorized dish when turned will sweep across all possible positions for satellites lined up along the geostationary orbit directly above the equator. The disk will then be capable of receiving any geostationary satellite that is visible at the specific location, i.e. that is above the horizon. The DiSEqC protocol has been extended to encompass commands for steering dish rotors.

Analog television distributed via satellite is usually sent scrambled or unscrambled in NTSC, PAL, or SECAM television broadcast standards. The analog signal is frequency modulated and is converted from an FM signal to what is referred to as baseband. This baseband comprises the video signal and the audio subcarrier(s). The audio subcarrier is further demodulated to provide a raw audio signal.

If the signal is a digitized television signal or multiplex of signals, it is typically QPSK.

In general, digital television, including that transmitted via satellites, are generally based on open standards such as MPEG and DVB-S or ISDB-S.

There are three primary types of satellite television usage: reception direct by the viewer, reception by local television affiliates, or reception by headends for distribution across terrestrial cable systems.

Direct to the viewer reception includes direct broadcast satellite or DBS and television receive-only or TVRO, both used for homes and businesses including hotels, etc.

Direct broadcast satellite, (DBS) also known as "Direct-To-Home" can either refer to the communications satellites themselves that deliver DBS service or the actual television service. DBS systems are commonly referred to as "mini-dish" systems. DBS uses the upper portion of the Ku band, as well as portions of the Ka band.

Modified DBS systems can also run on C-band satellites and have been used by some networks in the past to get around legislation by some countries against reception of Ku-band transmissions.

Most of the DBS systems use the DVB-S standard for transmission. With Pay-TV services, the datastream is encrypted and requires proprietary reception equipment. While the underlying reception technology is similar, the Pay-TV technology is proprietary, often consisting of a Conditional Access Module and smart card.

This measure assures satellite television providers that only authorised, paying subscribers have access to Pay TV content but at the same time can allow free-to-air (FTA) channels to be viewed even by the people with standard equipment (DBS receivers without the Conditional Access Modules) available in the market.

TVRO systems are designed to receive analog and digital satellite feeds of both television or audio from both C-band and Ku-band transponders on FSS-type satellites. The higher frequency Ku-band systems tend to be Direct To Home systems and can use a smaller dish antenna because of the higher power transmissions and greater antenna gain.

TVRO systems tend to use larger rather than smaller satellite dish antennas, since it is more likely that the owner of a TVRO system would have a C-band-only setup rather than a Ku band-only setup. Additional receiver boxes allow for different types of digital satellite signal reception, such as DVB/MPEG-2 and 4DTV.

The narrow beam width of a normal parabolic satellite antenna means it can only receive signals from a single satellite at a time. Simulsat or the Vertex-RSI TORUS, is a quasi-parabolic satellite earthstation antenna that is capable of receiving satellite transmissions from 35 or more C- and Ku-band satellites simultaneously.

Many satellite TV customers in developed television markets get their programming through a direct broadcast satellite (DBS) provider. The provider selects programs and broadcasts them to subscribers as a set package. Basically, the provider’s goal is to bring dozens or even hundreds of channels to the customers television in a form that approximates the competition from Cable TV. Unlike earlier programming, the provider’s broadcast is completely digital, which means it has high picture and stereo sound quality. Early satellite television services broadcast in C-band - radio in the 3.7 GigaHertz (GHz) to 4.2 GHz frequency range. Digital broadcast satellite transmits programming in the Ku frequency range (10 GHz to 14 GHz )[citation needed].