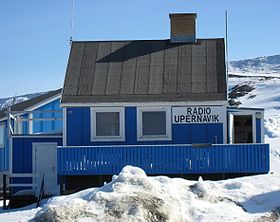 Greenland has, by law, only one service provider for telecommunications and internet, TELE Greenland,[1] which is fully owned by the Greenlandic Home Rule government. TELE Greenland provides switched telephone and data, land mobile communications, VHF and MF shore-to-ship communication, and television and radio broadcasting.[2] This type of monopoly is not uncommon in Greenland.

There are adequate domestic and international service, provided by cables and microwave radio relay. The system was totally digitized in 1995. As of 2008, Greenland had 23,500 telephone main lines in use. From 16,747 cellular phones in 2001, Greenland increased its usage to 66,400 mobile cellular telephones in 2007.[3]

The state broadcaster is Kalaallit Nunaata Radioa (Greenlandic Broadcasting Corporation) or KNR,[5] which provides one television and one radio service nationwide. Both broadcast in Greenlandic and Danish. Administered by the Greenlandic government, KNR has a seven-person board and management committee. They employ 100 people and are funded publicly and by advertising.[6]

An umbrella organization in Greenland, known as the STTK, operates local radio and TV stations throughout Greenland.

Greenland has a single Internet Service Provider (ISP). The Country code for top-level domains is: .gl. 52,000 people or 92.3% of Greenland's population are internet users.[7] The Greenland Connect submarine cable provides connectivity to Europe (via Iceland) and North America (via Newfoundland) [8]