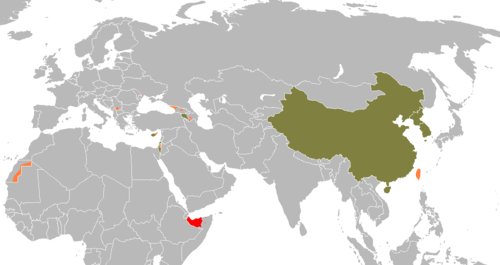 Some contemporary geopolitical entities that wish to be recognised as de jure sovereign states have been hindered by a lack of diplomatic recognition. In the past, similar entities have existed, and there are now entities claiming independence, often with de facto control of their territory, with recognition ranging from almost all other recognised states to no states at all.

There are two traditional doctrines that provide interpretations of when a de jure sovereign state should be recognised as a member of the international community. The "declarative" theory defines a state as a person in international law if it meets the following criteria: 1) a defined territory; 2) a permanent population; 3) a government and 4) a capacity to enter into relations with other states. According to declarative theory, an entity's statehood is independent of its recognition by other states. By contrast, the "constitutive" theory defines a state as a person of international law if it is recognised as such by another state that is already a member of the international community.[1]

Several entities reference either or both doctrines in order to legitimise their claims to statehood. There are, for example, entities which meet the declarative criteria (with de facto complete or partial control over their claimed territory, a government and a permanent population), but their statehood is not recognised by one or more other states. Non-recognition is often a result of conflicts with other countries that claim those entities as integral parts of their territory. In other cases, two or more partially recognised entities may claim the same territorial area, with each of them de facto in control of a portion of it (as have been the cases of the Republic of China and People's Republic of China, and North and South Korea). Entities that are only recognised by a minority of the world's states usually reference the declarative doctrine to legitimise their claims.

In many situations, international non-recognition is influenced by the presence of a foreign military force in the territory of the presumptive, self-declaring independent entity, so to make problematic the description of the country de facto status. The international community can judge this military presence too intrusive, reducing the entity to a puppet state where effective sovereignty is retained by the foreign power. Historical cases in this sense can be seen in Japanese-led Manchukuo or German-created Slovakia and Croatia before and during World War II. In 1996-case Loizidou vs. Turkey, the European Court of Human Rights judged Turkey for having exercised authority in the territory of Northern Cyprus.

There are also entities which do not have control over any territory or do not unequivocally meet the declarative criteria for statehood but have been recognised to exist de jure as sovereign entities by at least one other state. Historically this has happened in the case of the Holy See (1870–1929), Estonia, Latvia and Lithuania (during Soviet annexation), among other cases. The recognition of the State of Palestine by over one hundred states is a contemporary example. See list of governments in exile for unrecognised governments without control over the territory claimed.

The criteria for inclusion means a polity must claim statehood, lack recognition from at least one state, and either:

Some states do not establish relations with new nations quickly and thus do not recognise them despite having no dispute and sometimes favorable relations. These are excluded from the list. Some countries fulfill the declarative criteria, are recognised by the large majority of other nations and are members of the United Nations, but are included in the list here because one or more other states do not recognise their statehood, due to territorial claims or other conflicts. Currently there are 193 United Nations (UN) member states. The Holy See holds observer status in the United Nations.[2]

Some states maintain informal (officially non-diplomatic) relations with states that do not officially recognise them. The Republic of China (Taiwan) is one such state, as it maintains unofficial relations with many other states through its Economic and Cultural Offices, which allow regular consular services. This allows the ROC to have economic relations even with states that do not formally recognise it. A total of 56 states, including Germany,[3] Italy,[4] the United States,[5] and the United Kingdom,[6] maintain some form of unofficial mission in the ROC. Kosovo,[7] the Nagorno-Karabakh Republic,[8] Turkish Republic of Northern Cyprus,[9] Abkhazia,[10] Transnistria,[10] Sahrawi Republic,[11] Somaliland,[12] and Palestine[13] also host informal diplomatic missions, and/or maintain special delegations or other informal missions abroad. In the U.S., such offices by unrecognized entities are required to be registered as foreign lobbyist organizations under the Foreign Agent Registration Act (FARA) and act as regular lobbyists.

Non-UN member states not recognised by any state

Non-UN member states recognised by at least one UN member