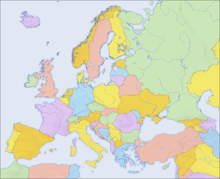 The word "country" is often colloquially used to refer to sovereign states, although it means, originally, only a geographic region, and subsequently its meaning became extended to the sovereign polity which controls the geographic region.

The concept of sovereign state is the source of the term "statesman" and the name of the US State Department.

The first known states were created in ancient times in Egypt, Mesopotamia, India, China, Mexico (Maya), Peru and others, but it is only in relatively modern times that states have almost completely displaced alternative "stateless" forms of political organization of societies all over the planet.[3] Roving bands of hunter-gatherers and even fairly sizable and complex tribal societies based on herding or agriculture have existed without any full-time specialized state organization, and these "stateless" forms of political organization have in fact prevailed for all of the prehistory and much of the history of the human species and civilization.[3]

Initially states emerged over territories built by conquest in which one culture, one set of ideals and one set of laws have been imposed by force or threat over diverse nations by a civilian and military bureaucracy.[3] Currently, that is not aways the case and there are multinational states, federated states and autonomous areas within states. Additionally multiculturalism is currently adopted in many unitary and nation states following different processes of human migration such as population transfer, political migration, immigration and emigration.

Since the late 19th century, virtually the entirety of the world's inhabitable land has been parcelled up into areas with more or less definite borders claimed by various states. Earlier, quite large land areas had been either unclaimed or uninhabited, or inhabited by nomadic peoples who were not organised as states. However, even within present-day states there are vast areas of wilderness, like the Amazon Rainforest, which are uninhabited or inhabited solely or mostly by indigenous people (and some of them remain uncontacted). Also, there are states which do not hold de facto control over all of their claimed territory or where this control is challenged (as in Somalia).

Currently the international community comprises around 200 sovereign states, the vast majority of which are represented in the United Nations. These states form what international relations theorists call a system, where each state takes into account the behavior of other states when making their own calculations. From that point of view, states embedded in an international system face internal and external security and legitimation dilemmas. Recently the notion of an international community has been developed to refer to a group of states who have established rules, procedures, and institutions for the conduct of their relations. In this way the foundation has been laid for international law, diplomacy, formal regimes, and organizations.

Sovereignty is a term that is frequently misused.[4] Up until the 19th century, the radicalised concept of a "standard of civilisation" was routinely deployed to determine that certain peoples in the world were "uncivilised", and lacking organised societies. That position was reflected and constituted in the notion that their "sovereignty" was either completely lacking, or at least of an inferior character when compared to that of "civilised" peoples."[5] Lassa Oppenheim said "There exists perhaps no conception the meaning of which is more controversial than that of sovereignty. It is an indisputable fact that this conception, from the moment when it was introduced into political science until the present day, has never had a meaning which was universally agreed upon."[6] In the opinion of Justice Evatt of the High Court of Australia "sovereignty is neither a question of fact, nor a question of law, but a question that does not arise at all." [7]

Sovereignty has taken on a different meaning with the development of the principle of self-determination and the prohibition against the threat or use of force as jus cogens norms of modern international law. The UN Charter, the Declaration on Rights and Duties of States, and the charters of regional international organisations express the view that all states are juridically equal and enjoy the same rights and duties based upon the mere fact of their existence as persons under international law.[8][9] The right of nations to determine their own political status and exercise permanent sovereignty within the limits of their territorial jurisdictions is widely recognised.[10][11][12]

In political science, sovereignty is usually defined as the most essential attribute of the state in the form of its complete self-sufficiency in the frames of a certain territory, that is its supremacy in the domestic policy and independence in the foreign one.[13]

In casual usage, the terms "country", "nation", and "state" are often used as if they were synonymous; but in a more strict usage they can be distinguished:[citation needed]

State recognition signifies the decision of a sovereign state to treat another entity as also being a sovereign state.[14] Recognition can be either express or implied and is usually retroactive in its effects. It doesn't necessarily signify a desire to establish or maintain diplomatic relations.

There is no definition that is binding on all the members of the community of nations on the criteria for statehood. In actual practice, the criteria are mainly political, not legal.[15] L.C. Green cited the recognition of the unborn Polish and Czech states in World War I and explained that "since recognition of statehood is a matter of discretion, it is open to any existing State to accept as a state any entity it wishes, regardless of the existence of territory or of an established government."[16]

In international law, however, there are several theories of when a state should be recognized as sovereign.[17]

The constitutive theory of statehood defines a state as a person of international law if, and only if, it is recognized as sovereign by other states. This theory of recognition was developed in the 19th century. Under it, a state was sovereign if another sovereign state recognized it as such. Because of this, new states could not immediately become part of the international community or be bound by international law, and recognized nations did not have to respect international law in their dealings with them.[18] In 1815 at the Congress of Vienna the Final Act only recognised 39 sovereign states in the European diplomatic system, and as a result it was firmly established that in future new states would have to be recognized by other states, and that meant in practice recognition by one or more of the great powers.[19]

One of the major criticisms of this law is the confusion caused when some states recognize a new entity, but other states do not. Hersch Lauterpacht, one of the theory's main proponents, suggested that it is a state's duty to grant recognition as a possible solution. However, a state may use any criteria when judging if they should give recognition and they have no obligation to use such criteria. Many states may only recognize another state if it is to their advantage.[18]

In 1912, L. F. L. Oppenheim had the following to say on constitutive theory:

By contrast, the "declarative" theory defines a state as a person in international law if it meets the following criteria: 1) a defined territory; 2) a permanent population; 3) a government and 4) a capacity to enter into relations with other states. According to declarative theory, an entity's statehood is independent of its recognition by other states. The declarative model was most famously expressed in the 1933 Montevideo Convention.

Article 3 of the Convention declares that statehood is independent of recognition by other states. In contrast, recognition is considered a requirement for statehood by the constitutive theory of statehood.

State practice relating the recognition states typically falls somewhere between the declaratory and constitutive approaches.[21] International law does not require a state to recognise other states.[22]

Recognition is often withheld when a new state is seen as illegitimate or has come about in breach of international law. Almost universal non-recognition by the international community of Rhodesia and Northern Cyprus are good examples of this. In the former case, recognition was widely withheld when the white minority seized power and attempted to form a state along the lines of Apartheid South Africa, a move that the United Nations Security Council described as the creation of an "illegal racist minority régime".[23] In the latter case, recognition was widely withheld from a state created in Northern Cyprus on land illegally invaded by Turkey in 1974.[24]

Most sovereign states are states de jure and de facto (i.e. they exist both in law and in reality). However, sometimes states exist only as de jure states in that an organisation is recognised as having sovereignty over and being the legitimate government of a territory over which they have no actual control. Many continental European states maintained governments-in-exile during the Second World War which continued to enjoy diplomatic relations with the Allies, notwithstanding that their countries were under Nazi occupation. A present day example is the State of Palestine, which is recognized by multiple states, but doesn't have control over any of its claimed territory in Palestine[25][39] and possess only extraterritorial areas (i.e. embassies and consulates). Other states may have sovereignty over a territory but lack international recognition; these are considered by the international community to be only de facto states (they are considered de jure states only according to their own Law and by states that recognize them). Somaliland is commonly considered to be such a state.[40][41][42][43] For a list of entities that wish to be universally recognized as sovereign states, but do not have complete worldwide diplomatic recognition, see the list of states with limited recognition.