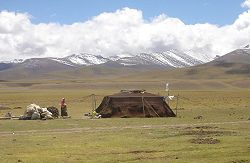 Pastoral nomads camping near Namtso in 2005. In Tibet, nomads constitute about 40% of ethnic Tibetan population.[1] 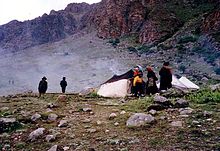 Nomad camp above Tsurphu Monastery, Tibet. 1993. Smoke is from juniper being burnt as an offering at a ceremony.

Nomadic people (Greek: νομάδες, nomádes, "those who let pasture herds"), commonly known as itinerants in modern-day contexts, are communities of people who move from one place to another, rather than settling permanently in one location. There are an estimated 30-40 million nomads in the world.[2] Many cultures have traditionally been nomadic, but traditional nomadic behavior is increasingly rare in industrialized countries. Nomadic cultures are discussed in three categories according to economic specialization: hunter-gatherers, pastoral nomads, and "peripatetic nomads".

Pastoralists raise herds, driving them or moving with them, in patterns that normally avoid depleting pastures beyond their ability to recover.

Peripatetic nomads, who offer the skills of a craft or trade to those with whom they travel, are most common in industrialized nations.

Many groups of 'nomadic' hunter-gatherers (also known as foragers) moved from campsite to campsite, following game and wild fruits and vegetables. Known examples include: 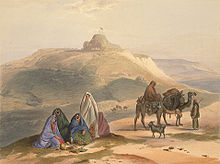 An 1848 Lithograph showing nomads in Afghanistan.

A yurt in front of the Gurvan Saikhan Mountains. Approximately 30% of the Mongolia's 3 million people are nomadic or semi-nomadic. 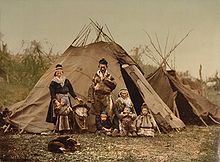 A Sami (Lapp) family in Norway around 1900. Reindeer have been herded for centuries by several Arctic and Subarctic people including the Sami and the Nenets.[3]
Main articles: Pastoralism and Transhumance

Pastoral nomads are nomads moving between pastures. Nomadic pastoralism is thought to have developed in three stages that accompanied population growth and an increase in the complexity of social organization. Karim Sadr has proposed the following stages:

The pastoralists are sedentary to a certain area, as they move between the permanent spring, summer, autumn and winter (or dry and wet season) pastures for their livestock. The nomads moved depending on the availability of resources.[4]

Nomadic pastoralism seems to have developed as a part of the secondary products revolution proposed by Andrew Sherratt, in which early pre-pottery Neolithic cultures that had used animals as live meat ("on the hoof") also began using animals for their secondary products, for example, milk and its associated dairy products, wool and other animal hair, hides and consequently leather, manure for fuel and fertilizer, and traction.

The first nomadic pastoral society developed in the period from 8500-6500 BC in the area of the southern Levant.[citation needed] There, during a period of increasing aridity, PPNB cultures in the Sinai were replaced by a nomadic, pastoral pottery-using culture, which seems to have been a cultural fusion between a newly arrived Mesolithic people from Egypt (the Harifian culture), adopting their nomadic hunting lifestyle to the raising of stock. This lifestyle quickly developed into what Jaris Yurins has called the circum-Arabian nomadic pastoral techno-complex and is possibly associated with the appearance of Semitic languages in the region of the Ancient Near East. The rapid spread of such nomadic pastoralism was typical of such later developments as of the Yamnaya culture of the horse and cattle nomads of the Eurasian steppe, or of the Greko-Mongol spread of the later Middle Ages.[5]

Increase in the former Soviet Union

One of the results of the break-up of the Soviet Union and the subsequent political independence and economic collapse of its Central Asian republics has been the resurgence of pastoral nomadism.[6] Taking the Kyrgyz people as a representative example nomadism was the centre of their economy prior to Russian colonization at the turn of the C19/C20, when they were settled into agricultural villages. The population became increasingly urbanized after World War II, but some people continued to take their herds of horses and cows to the high pasture (jailoo) every summer, i.e. a pattern of transhumance. Since the 1990s, as the cash economy shrank, unemployed relatives were absorbed back on the family farm, and the importance of this form of nomadism has increased. The symbols of nomadism, specifically the crown of the grey felt tent known as the yurt, appears on the national flag, emphasizing the centrality of their nomadic history and past in the creation of the modern nation of Kyrgyzstan.

By 1920; nomadic pastoral tribes represented over a quarter of Iran's population.[7] Tribal pastures were nationalized during the 1960s. The National Commission of UNESCO registered the population of Iran at 21 million in 1963, of whom two million (9.5%) were nomads.[8] Although the nomadic population of Iran has dramatically decreased in the 20th century, Iran still has one of the largest nomadic populations in the world, an estimated 1.5 million in a country of about 70 million.[9] 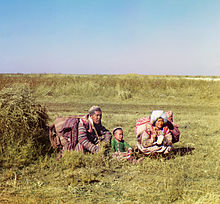 In Kazakhstan where the major agricultural activity was nomadic herding,[10] forced collectivization under Joseph Stalin’s rule met with massive resistance and major losses and confiscation of livestock.[11] Livestock in Kazakhstan fell from 7 million cattle to 1.6 million and from 22 million sheep to 1.7 million. The resulting famine of 1931-1934 caused some 1.5 million deaths: this represents more than 40% of the total Kazakh population at that time.[12]

In the 1950s as well as the 1960s, large numbers of Bedouin throughout the Middle East started to leave the traditional, nomadic life to settle in the cities of the Middle East, especially as home ranges have shrunk and population levels have grown. Government policies in Egypt and Israel, oil production in Libya and the Persian Gulf, as well as a desire for improved standards of living, effectively led most Bedouin to become settled citizens of various nations, rather than stateless nomadic herders. A century ago nomadic Bedouin still made up some 10% of the total Arab population. Today they account for some 1% of the total.[13]

At independence in 1960, Mauritania was essentially a nomadic society. The great Sahel droughts of the early 1970s caused massive problems in a country where 85% of its inhabitants were nomadic herders. Today only 15% remain nomads.[14]

As many as 2 million nomadic Kuchis wandered over Afghanistan in the years before the Soviet invasion, and most experts agreed that by 2000 the number had fallen dramatically, perhaps by half. The severe drought had destroyed 80% of the livestock in some areas.[15]

Niger experienced a serious food crisis in 2005 following erratic rainfall and desert locust invasions. Nomads such as the Tuareg and Fulani, who make up about 20% of Niger's 12.9 million population, had been so badly hit by the Niger food crisis that their already fragile way of life is at risk.[16] Nomads in Mali were also affected.[17] In the great lakes region, a growing number of teenagers are taking on "nomadic" lifestyles. It differs from homelessness by the "nomads moving in groups of about 12 or 15 to a different house each night. One of the more famous nomads is Seirra Rhyno, who has become a sort of spokesperson for the lifestyle.[citation needed] 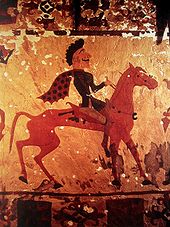 A Scythian horseman from the general area of the Ili river, Pazyryk, c.300 BCE. 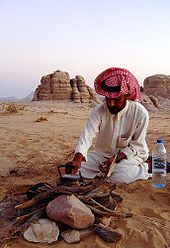 Most or all of these ethnonyms probably do not correspond to one community; many are locally or regionally used (sometimes as occupational names), others are used only by group members, and still others are used pejoratively only by outsiders.

For example, in Afghanistan, "Jat" is a pejorative term used generically by nonperipatetics to designate peripatetics belonging to at least six different communities. In Iran and Turkey, the terms "Ghorbati" and "Çingene" appear to be used in a similar fashion. Some of these ethnonyms are also encountered in other neighboring areas of the Middle East, the Balkans, or South Asia.[citation needed]

Each existing community is primarily endogamous, and subsists traditionally on a variety of commercial and/or service activities. Formerly, all or a majority of their members were itinerant, and this largely holds true today. Migration generally takes place within the political boundaries of a single state these days.

Each of the peripatetic communities is multilingual; it speaks one or more of the languages spoken by the local sedentary populations, and, additionally, within each group, a separate dialect or language is spoken.[citation needed] The latter are either of Indic or Iranian origin,[citation needed] and many are structured somewhat like an argot or secret language, with vocabularies drawn from various languages. There are indications that in northern Iran at least one community speaks Romani language, and some groups in Turkey also speak Romani.

In Afghanistan, the Nausar worked as tinkers and animal dealers. Ghorbat men mainly made sieves, drums, and bird cages, and the women peddled these as well as other items of household and personal use; they also worked as moneylenders to rural women. Peddling and the sale of various goods was also practiced by men and women of various groups, such as the Jalali, the Pikraj, the Shadibaz, the Noristani, and the Vangawala. The latter and the Pikraj also worked as animal dealers. Some men among the Shadibaz and the Vangawala entertained as monkey or bear handlers and snake charmers; men and women among the Baluch were musicians and dancers, and Baluch women also practiced prostitution. Jogi men and women had diverse subsistence activities, such as dealing in horses, harvesting, fortune-telling, bloodletting, and begging.[citation needed]

In Iran the Asheq of Azerbaijan, the Challi of Baluchistan, the Luti of Kurdistan, Kermānshāh, Īlām, and Lorestān, the Mehtar in the Mamasani district, the Sazandeh of Band-i Amir and Marv-dasht, and the Toshmal among the Bakhtyari pastoral groups worked as professional musicians. The men among the Kowli worked as tinkers, smiths, musicians, and monkey and bear handlers; they also made baskets, sieves, and brooms and dealt in donkeys. Their women made a living from peddling, begging, and fortune-telling. The Ghorbat among the Basseri were smiths and tinkers, traded in pack animals, and made sieves, reed mats, and small wooden implements. In the Fārs region, the Qarbalband, the Kuli, and Luli were reported to work as smiths and to make baskets and sieves; they also dealt in pack animals, and their women peddled various goods among pastoral nomads. In the same region, the Changi and Luti were musicians and balladeers, and their children learned these professions from the age of 7 or 8 years.[citation needed]

The nomadic groups in Turkey make and sell cradles, deal in animals, and play music. The men of the sedentary groups work in towns as scavengers and hangmen; elsewhere they are fishermen, smiths, basket makers, and singers; their women dance at feasts and tell fortunes. Abdal men played music and made sieves, brooms, and wooden spoons for a living. The Tahtacı traditionally worked as lumberers; with increased sedentarization, however, they have taken to agriculture and horticulture.[citation needed]

Little is known for certain about the past of these communities; the history of each is almost entirely contained in their oral traditions. Although some groups—such as the Vangawala—are of Indian origin, some—like the Noristani—are most probably of local origin; still others probably migrated from adjoining areas. The Ghorbat and the Shadibaz claim to have originally come from Iran and Multan, respectively, and Tahtacı traditional accounts mention either Baghdad or Khorāsān as their original home. The Baluch say they were attached as a service community to the Jamshedi, after they fled Baluchistan because of feuds.[21][22]

Nomads in the Desert (Giulio Rosati)

Synonyms:
Wanderer, one of a nomadic people