For other uses, see Vegetable (disambiguation). 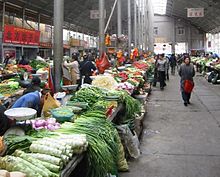 Vegetables in a supermarket in the United States.

The noun vegetable usually means an edible plant or part of a plant other than a sweet fruit or seed. This typically means the leaf, stem, or root of a plant.

However, the word is not scientific, and its meaning is largely based on culinary and cultural tradition. Therefore, the application of the word is somewhat arbitrary and subjective. For example, some people consider mushrooms to be vegetables even though they are not plants,[1][2] while others consider them a separate food category.[3]

Some vegetables can be consumed raw, some may be eaten cooked, and some must be cooked in order to be edible. Vegetables are most often cooked in savory or salty dishes. However, a few vegetables are often used in desserts and other sweet dishes, such as rhubarb pie and carrot cake.

As an adjective, the word vegetable is used in scientific and technical contexts with a different and much broader meaning, namely of "related to plants" in general, edible or not — as in vegetable matter, vegetable kingdom, vegetable origin, etc.[4] The meaning of "vegetable" as "plant grown for food" was not established until the 18th century.[5] 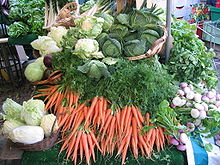 "Vegetable" comes from the Latin vegetabilis (animated) and from vegetare (enliven), which is derived from vegetus (active), in reference to the process of a plant growing. This in turn derives from the Proto-Indo-European base *weg- or *wog-, which is also the source of the English wake, meaning "become (or stay) alert".[citation needed]

The word "vegetable" was first recorded in English in the 15th century,[6] but applied to any plant. This is still the sense of the adjective "vegetable" in science.[4] The related term vegetation also has a similarly broad scope. Likewise in the all-purpose question, "Animal, vegetable, or mineral?" 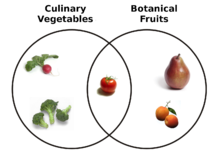 There are at least four definitions relating to fruits and vegetables:

In everyday, grocery-store, culinary language, the words "fruit" and "vegetable" are mutually exclusive; plant products that are called fruit are hardly ever classified as vegetables, and vice-versa. For scientists, the word "fruit" has a precise botanical meaning (a part that developed from the ovary of a flowering plant), which is considerably different from its common meaning, and includes many poisonous fruits. While peaches, plums, and oranges are "fruit" in both senses, many items commonly called "vegetables" — such as eggplants, bell peppers, and tomatoes — are technically fruits, while the cereals (grains) are both a fruit and a vegetable, as well as some spices like black pepper and chillies. Some plant products, such as corn or peas, may be considered to be vegetables only while still unripe.

The question of whether the tomato is a fruit or a vegetable found its way into the United States Supreme Court in 1893. The court ruled unanimously in Nix v. Hedden that a tomato is correctly identified as, and thus taxed as, a vegetable, for the purposes of the Tariff of 1883 on imported produce. The court did acknowledge, however, that, botanically speaking, a tomato is a fruit.[7]

Languages other than English often have categories that can be identified with the common English meanings of "fruit" and "vegetable", but their precise meaning often depends on local culinary traditions. For example, in Brazil the avocado is traditionally consumed with sugar as a dessert or in milkshakes, and hence it is regarded as a fruit; whereas in other countries (including Mexico and the United States) it is used in salads and dips, and hence considered to be a vegetable.[citation needed]

Examples of different parts of plants used as vegetables

The list of food items called "vegetable" is quite long, and includes many different parts of plants: 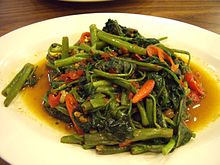 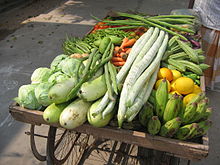 Vegetables (and some fruit) for sale on a street in Guntur, India

Vegetables are eaten in a variety of ways, as part of main meals and as snacks. The nutritional content of vegetables varies considerably, though generally they contain little protein or fat,[8][9] and varying proportions of vitamins such as Vitamin A, Vitamin K and Vitamin B6, provitamins, dietary minerals and carbohydrates. Vegetables contain a great variety of other phytochemicals, some of which have been claimed to have antioxidant, antibacterial, antifungal, antiviral and anticarcinogenic properties.[10][11] Some vegetables also contain fiber important for GI function. Vegetables contain important nutrients necessary for proper Hair and Skin as well. A person who refrains from dairy and meat products, and eats only plants (including vegetables) is known as a Vegan.

However, vegetables often also contain toxins and antinutrients such as α-solanine, α-chaconine,[12] enzyme inhibitors (of cholinesterase, protease, amylase, etc.), cyanide and cyanide precursors, oxalic acid, and more.[13] Depending on the concentration, such compounds may reduce the edibility, nutritional value, and health benefits of dietary vegetables. Cooking and/or other processing may be necessary to eliminate or reduce them.

The green color of leafy vegetables is due to the presence of the green pigment chlorophyll. Chlorophyll is affected by the pH, and it changes to olive green in acid conditions, and to bright green in alkaline conditions. Some of the acids are released in steam during cooking, particularly if cooked without a cover.

The yellow/orange colors of fruits and vegetables are due to the presence of carotenoids, which are also affected by normal cooking processes or changes in pH.

The red/blue coloring of some fruits and vegetables (e.g. blackberries and red cabbage) are due to anthocyanins, which are sensitive to changes in pH. When the pH is neutral, the pigments are purple, when acidic, red, and when alkaline, blue. These pigments are quite water-soluble.

Fruit and vegetable output in 2004

Of all the world's nations, China is the leading cultivator of vegetables, with top productions in potato, onions, cabbage, lettuce, tomatoes and broccoli. 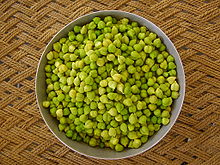 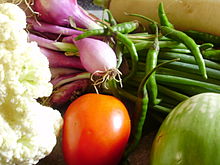 Many root and non-root vegetables that grow underground can be stored through winter in a root cellar or other similarly cool, dark, and dry place to prevent the growth of mold, greening and sprouting. Care should be taken in understanding the properties and vulnerabilities of the particular roots to be stored. These vegetables can last through to early spring and be nearly as nutritious as when fresh.

During storage, leafy vegetables lose moisture, and the vitamin C in them degrades rapidly. They should be stored for as short a time as possible in a cool place, in a sealed container or a plastic bag.

There is a series of ISO standards regarding fruits and vegetables.[16]