/ˈɛndɪv/[1] or /ˈɛndaɪv/), Cichorium endivia, is a leaf vegetable belonging to the daisy family. Endive can be cooked or used raw in salads.

Endive is rich in many vitamins and minerals, especially in folate and vitamins A and K, and is high in fiber.

There are two main varieties of cultivated endive: 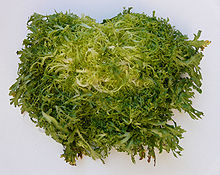