Malaysian cuisine reflects the multicultural aspects of Malaysia. Various ethnic groups in Malaysia have their own dishes, but many dishes in Malaysia are derived from multiple ethnic influences.[1] Food preparation differs from place to place, although many of the foods used are alike.[citation needed] Spices, aromatic herbs and roots are all used in Malaysian cuisine.[2] 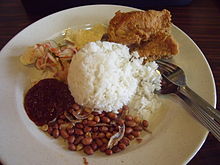 Rice tends to be a staple food in Malaysia as in most countries in the region. The rice eaten in Malaysia tends to be the local variety of rice or fragrant rice from Thailand, its northern neighbour. Quality Indian basmati is used in biryani dishes due to its long grained shape, fragrance and delicate flavour. Japanese short grain rice and others are slowly entering the Malaysian diet as Malaysians expand their culinary tastes to new areas.

A popular dish based on rice is nasi lemak: rice steamed with coconut milk to give it a rich fragrance, and served with fried anchovies, peanuts, sliced cucumber, hard boiled eggs and a spicy chilli paste known as sambal. For a more substantial meal, nasi lemak can also be served with a choice of curries, or a spicy meat stew called rendang. Of Malay origin, nasi lemak is often called the national dish.[3] Although it is traditionally a breakfast dish, because of the versatility of nasi lemak in being able to be served in a variety of ways, it is now often eaten at any time of the day. The Malaysian Indian variety of the sambal tends to be a bit more spicy, and the Malay sambal in a nasi lemak tends to be a bit sweeter. Nasi lemak is not to be confused with nasi dagang, which is sold on the east coast of Malaysia — Terengganu and Kelantan — although both nasi lemak and nasi dagang can usually be found sold side-by-side for breakfast.

Malaysian poultry is handled according to Halal standards, to conform with the country's dominant and official religion, Islam.[4] Imported poultry is quite rare.

Beef is common in the Malaysian diet though it is notable that followers of certain religions such as Hinduism and some followers of Buddhism such as monks forbid the consumption of beef, while some Buddhists say people can eat beef and other meat. Beef can be commonly found cooked in curries, stews, roasted, or with noodles. Malays generally eat beef that is halal. Australian fresh beef which is prepared under supervision of the Government Supervised Muslim Slaughter System (AGSMS) is imported into Malaysia and that beef is halal.[5]]

Pork is largely consumed by the non-Muslim community in Malaysia like the Malaysian Chinese, natives like Iban, Kadazan, Orang Asli and expatriates. All Malaysian Malays are Muslim and therefore do not consume pork since Islam forbids it but does not prohibit others from producing and consuming pork products. Pork can be bought in wet markets, supermarkets and hypermarkets.[6]During the Nipah virus epidemic, over a million pigs were culled in an effort to contain the outbreak.[7]

Mutton is also a part of the Malaysian cuisine. It generally refers to goat meat rather than sheep. The meat is used in dishes such as goat soup, curries, or stews. It is a popular ingredient in Malaysian Indian food.

Many types of seafood are consumed in Malaysia, including shrimp or prawn, crab, squid, cuttlefish, clams, cockles, snails, sea cucumber and octopus. In general, members of all ethnic communities enjoy seafood, which is considered halal by Malaysian Muslims (and indeed all other Muslims), though some species of crabs are not considered Halal as they can live on both land and sea. Sea cucumbers are considered halal.

Fish features in the Malaysian diet and most local fish is purchased the day after it is caught. Frozen fish is generally imported. Such fish, namely salmon and cod, are well received on the Malaysian table but are not caught by local fishermen. Imported fish are frozen and flown in as pieces or as whole fish and usually sold by weight.

Vegetables are usually available year round as Malaysia does not have four seasons. During the rainy season, sometimes vegetable yield decreases but does not stop altogether. Therefore, vegetables can be purchased throughout the year but are slightly more expensive at certain times of the year.

Malaysia's climate allows for fruits to be grown all year round. Most tropical fruits are either grown in Malaysia or imported from neighbouring countries. The demand for fruits is generally quite high. Some notable fruits include:

Malay cuisine bears many similarities to Indonesian cuisine, in particular some of the regional traditions from Sumatra. It has also been influenced by Chinese, Indian, Thai and many other cultures throughout history, producing a distinct cuisine of their own. Many Malay dishes revolve around a Rempah, which is a spice paste or mix similar to an Indian Masala. Rempahs are made by grinding up fresh and/or dried spices and herbs to create a spice paste which is then sauteed in oil to bring out the aromas.[8] 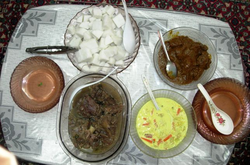 Malaysian Indian cuisine of the ethnic Indians in Malaysia is similar to its roots in India, especially South India although there are many notable foods with influences from North India too. Before the meal it is customary to wash hands as cutlery is often not used while eating, with the exception of a serving spoon for each respective dish. This cuisine consists of curries which uses a lot of spices, coconut milk, and curry leaves. Some of the most popular curries include chicken curry, fish curry, and squid curry.

Mamak (Indian Muslims) dishes have developed a distinctly Malaysian style. Available throughout the country, the omnipresent Mamak stalls or restaurants are particularly popular among the locals as they offer a wide range of food and some outlets are open 24 hours a day. A type of Indian Muslim meal served buffet-style at specialist Mamak eateries is called nasi kandar (analogous to the Indonesian nasi padang, where you pay for what you have actually eaten), white rice or briyani rice served with other dishes of curry either with chicken, fish, beef, or mutton, and usually accompanied with pickled vegetable and papadums. 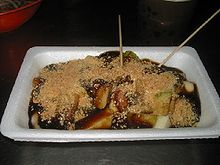 Malaysian Chinese food is derived from mainland southern Chinese cuisine such as Fujian cuisine and Hakka cuisine but has been influenced by local ingredients and dishes from other cultures though it remains distinctly Chinese. Most Chinese meals have pork as their sub-ingredient, but due to the popularity and unique taste of the actual food, there are chicken options available for the local Malays (most Malays are Muslims). Some Chinese food restaurants nowadays can be found serving halal food. Chinese restaurants serving food in halal can introduce a wider range of customers to it. 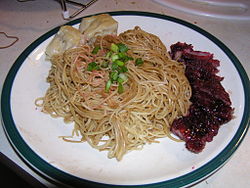 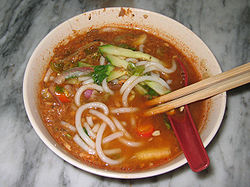 A bowl of Asam laksa.

Nyonya food was developed by the Nyonya (Straits Chinese) and Peranakan (mixed Chinese/Malay ancestry) people of Malaysia and Singapore. It uses mainly Chinese ingredients but blends them with South-East Asian spices such as coconut milk, lemon grass, turmeric, screwpine leaves, chillies and sambal. It can be considered as a blend of Chinese and Malay cooking with some Thai influence .

Examples of Nyonya dishes include:

Sarawakians tend to have a distinct cuisine from their Peninsula counterparts. Some of them are part of the traditional cuisine of the natives, while some are influenced by either Chinese or Indian cuisine. Among the cuisine unique to Sarawak are:

Being a multicultural country, Malaysians have over the years adapted each other's dishes to suit the taste buds of their own culture. For instance, Malaysians of Chinese descent have adapted the Indian curry, and made it more dilute and less spicy to suit their taste. 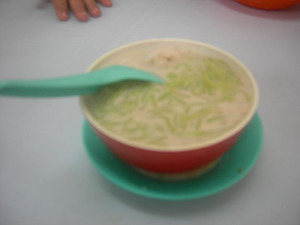 A bowl of cendol.

Desserts in Malaysia tend to make use of generous amounts of coconut milk. Some common desserts include:

A huge variety of tropical fruits are commonly served as desserts in Malaysia. The most famous is possibly the durian. Other popular fruits local to Malaysia include mango, pineapple, watermelon, jackfruit, papaya, langsat, rambutan, star fruit, banana and mangosteen.

Some of the foods are similar to the food of its neighbouring countries. Due to its diversity in cultures, there is a wide variety of different foods available.