The Ibans are a branch of the Dayak peoples of Borneo. In Malaysia, most Ibans are located in Sarawak, a small portion in Sabah and some in west Malaysia. They were formerly known during the colonial period by the British as Sea Dayaks. Ibans were renowned for practising headhunting and tribal/territorial expansion. In ancient times the Ibans were a strong and successful warring tribe in Borneo. They speak the Iban language.

Today, the days of headhunting and piracy are long gone and in has come the modern era of globalization and technology for the Ibans. The Iban population is concentrated in Sarawak, Brunei, and in the West Kalimantan region of Indonesia. They live in longhouses called rumah panjai[1]. Most of the Iban longhouses are equipped with modern facilities such as electricity and water supply and other facilities such as (tar sealed) roads, telephone lines and the internet. Younger Ibans are mostly found in urban areas and visit their hometowns during the holidays. The Ibans today are becoming increasingly urbanised while retaining most of their traditional heritage and culture.

The Ibans were the original inhabitants of Borneo Island. Like the other Dayak tribes, they were originally farmers, hunters, and gatherers. Not much is known about Iban people before the arrival of the Western expeditions to Asia. Nothing was ever recorded by any voyagers about them.

The Ibans were unfortunately branded for being pioneers of headhunting. Headhunting among the Ibans is believed to have started when the lands occupied by the Ibans became over-populated. In those days, before the arrival of western civilization, intruding on lands belonging to other tribes resulted in death. Confrontation was the only way of survival.

The Ibans started moving to areas in what is today's Sarawak around the 15th century. After an initial phase of colonising and settling the river valleys, displacing or absorbing the local tribes, a phase of internecine warfare began. Local leaders were forced to resist the tax collectors of the sultans of Brunei. At the same time, Malay influence was felt, and Iban leaders began to be known by Malay titles such as Datu (Datuk), Nakhoda and Orang Kaya.

In later years, the Iban encountered the Bajau and Illanun, coming in galleys from the Philippines. These were seafaring tribes who came plundering throughout Borneo. However, the Ibans feared no tribe, and fought the Bajaus and Illanuns. One famous Iban legendary figure known as Lebor Menoa from Entanak, near modern-day Betong, fought and successfully defeated the Bajaus and Illanuns. It is likely that the Ibans learned seafaring skills from the Bajau and the Illanun, using these skills to plunder other tribes living in coastal areas, such as the Melanaus and the Selakos. This is evident with the existence of the seldom-used Iban boat with sail, called the bandung. This may also be one of the reasons James Brooke, who arrived in Sarawak around 1838, called the Ibans Sea Dayaks. For more than a century, the Ibans were known as Sea Dayaks to Westerners. 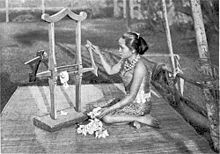 The Ibans were traditionally animist, although the majority are now Christian, many continue to observe both Christian and traditional ceremonies, particularly during marriages or festivals.

Significant festivals include the rice harvesting festival Gawai Dayak, the main festival for the Ibans.Other festivals include the bird festival Gawai Burong and the spirit festival Gawai Antu. The Gawai Dayak festival is celebrated every year on the 1st of June, at the end of the harvest season, to worship the Lord Sempulang Gana. On this day, the Ibans get together to celebrate, often visiting each other. The Iban traditional dance, the ngajat, is performed accompanied by the taboh and gendang, the Ibans' traditional music. Pua Kumbu, the Iban traditional cloth, is used to decorate houses. Tuak, which is originally made of rice, is a wine used to serve guests. Nowadays, there are various kinds of tuak, made with rice alternatives such as sugar cane, ginger and corn.

The Gawai Burong (the bird festival) is held in honour of the war god, Singalang Burong. (Singalang the Bird). This festival is initiated by a notable individual from time to time and hosted by individual longhouses. The Gawai Burong originally honoured warriors, but during more peaceful times evolved into a healing ceremony. The recitation of pantun (traditional chants by poets) is a particularly important aspect of the festival.

Despite the difference in faiths, Ibans of different faiths do help each other during Gawais and Christmas. Differences in faith is never a problem in the Iban community.[citation needed] The Ibans believe in helping and having fun together.

Iban music is percussion-oriented. The Iban have a musical heritage consisting of various types of agung ensembles - percussion ensembles composed of large hanging, suspended or held, bossed/knobbed gongs which act as drones without any accompanying melodic instrument. The typical Iban agung ensemble will include a set of engkerumungs (small agungs arranged together side by side and played like a xylophone), a tawak (the so-called 'bass'), a bendai (which acts as a snare) and also a set of ketebung (a single sided drum/percussion).

The Iban as well as the Kayan and Kenyah also play an instrument resembling the guitar called Sape (instrument). The Sape (instrument) is the official musical instrument for the Malaysian state of Sarawak. It is played similarly to the way rock guitarists play guitar solos, albeit a little slower, but not as slow as blues.[1][2] One example of Iban traditional music is the taboh.

The Ibans perform a unique dance called the ngajat. It serves many purposes depending on the occasion. During Gawais, it is used to entertain the people who in the olden days enjoy graceful ngajats as a form of entertainment. Iban men and women have different styles of ngajat. The ngajat involves a lot of precise body-turning movements. The ngajat for men is more aggressive and depicts a man going to war, or a bird flying (as a respect to the Iban god of war, Singalang Burong). The women's form of ngajat consists of soft, graceful movements with very precise body turns. Each ngajat is accompanied by the taboh or the body. 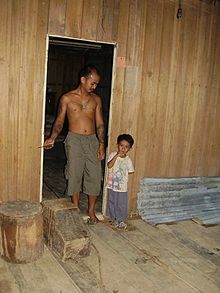 An Iban family living in a longhouse in Betong

Branches of the Iban People

Although Ibans generally speak a dialect which is mutually intelligible, they can be divided into different branches which are named after the geographical areas where they reside.

In West Kalimantan (Indonesia), Iban people are even more diverse. The Kantu, Air Tabun, Semberuang, Sebaru' , Bugau, Mualang & along with many other groups are classed as "Ibanic people" by anthropologists. They can be related to the Iban either by the dialect they speak or their customs, rituals & their way of life.