Orang Asli (lit. "original people", "natural people" or "aboriginal people" in Malay), is a generic Malaysian term used for people indigenous to Peninsular Malaysia. Officially, there are 18 orang asli tribes, categorised under three main groups according to their different languages and customs:

There is an orang asli museum at Gombak, about 25 km north of Kuala Lumpur.

Orang Asli kept to themselves until the first traders from India arrived in first millennium AD.[2] Living in the interior they bartered in land products like resins, incense woods and feathers for salt, cloth and iron tools. The rise of the Malay sultanates, coinciding with trade in Orang Asli slaves, forced the group to retreat further inland to avoid contact with outsiders. The arrival of British colonists brought further inroads in the lives of Orang Asli. They were the target of Christian missionary and subjects of anthropological research.[3]

During the Malayan Emergency of 1948 to 1960, the Orang Asli became a vital component of national security, as with their help, the Malayan army was able to defeat the communist insurgents. Two administrative initiatives were introduced to highlight the importance of Orang Asli as well to protect its identity. The initiatives were the establishment of the Department of Aborigines in 1950, and the enactment of the Aboriginal Peoples Ordinance in 1954. After independence, the development of Orang Asli become the prime objective of the government where the government adopted a policy in 1961 to integrate the Orang Asli into the wider Malaysian society.[3]

Within the decades of 1970s and 1980s, Malaysia was in the period of sustained growth. With development that emphasize modernization and industrialization, new lands were developed. This development has resulted in encroachments on Orang Asli land. In response of this encroachment, the Orang Asli mobilized themselves and formed the Peninsular Malaysia Orang Asli Association (POASM). With this association, the Orang Asli have become more visible and vocal. Orang Asli are now known as "Orang Kita" ('our people') since Dato' Seri Mohd. Najib bin Tun Haji Abdul Razak introduced the "One Malaysia" concept[3]

Slave raids into Orang Asli settlements were quite common feature back in the 18th and 19th centuries. These slave-raiders were mainly local Malays and Bataks, who considered the Orang Asli as 'kafirs', 'non-humans', 'savages' and 'jungle-beasts.'[citation needed] The modus operandi was basically to swoop down a settlement and then kill off all the adult men. Women and children were captured alive as they are 'easier to tame.' The captives Orang Asli slaves were sold off or given to local rulers and chieftains to gain their favour. Slaves trade soon developed and even continued into the present century despite the official abolition of all forms of slavery in 1884. The derogatory term sakai was used to refer to the Orang Asli until the middle of the 20th century meant slave or dependent. Many of the elders Orang Asli still remember this sad period of their history, and they detest being called Sakai. [1]

Orang Asli living in remote forest areas engaged in some trading with the Malays, with jungle produce being exchanged for salt, knives and metal axe-heads. There was also evidence of trade in blowpipes and blowpipe-bamboo among certain tribes. It has also been shown that the Orang Asli have played a significant role in the Malay Peninsula's economic history as collectors and primary traders as early as the 5th Century A.D. An early 19th century report also tells of Negritos providing forest products as tribute to the Malay chiefs of the river basins they resided in. [2]

The poverty rate among Orang Asli is 76.9%.[1] In addition to this high rate, the Statistics Department of Malaysia has classified 35.2% of the population as being "hardcore poor". The majority of Orang Asli live in rural areas, while a minority have moved into urban areas. In 1991, the literacy rate for the Orang Asli was 43% compared to the national rate of 86% at that time.[1] They have an average life expectancy of 53 years (52 for male and 54 for female). A high infant mortality rate is also evident with 51.7 deaths per 1000 births.[6]

The division of Orang Asli into three categories is not due to linguistic differences but is merely sociological: linguistically they divide into two groups.

The second group speak Aboriginal Malay languages, which form part of the Austronesian language family. These include the Jakun and Temuan languages among others.[8]

Besides these, most Orang Aslis are fluent in the Malay language, the official language of Malaysia.

Location of Orang Asli groups, and the evolution of settlers on the Malay Peninsula.

Orang Asli are traditionally animists, where they believe in the presence of spirits in various objects.[9] However, in the 21st century, many of them have embraced monotheistic religions such as Islam and Christianity[9] following some active state-sponsored dakwah by Muslims, and evangelism by Christian missionaries.[10]

In June 2007, an Orang Asli church was allegedly torn down by the government in Gua Musang, Kelantan. As of 2008, a suit has been filed against the authorities. The affected Orang Asli also sought a declaration under Article 11 of the Constitution of Malaysia that they have the right to practice the religion of their choice and to build their own prayer house.[11]

According to the Encyclopedia of Malaysia, the Negritos, who number approximately 2,000, are regarded as the earliest inhabitants of the Malay Peninsula. They are of Australo-Melanesian affinity and probably descend from the people of Hoabinhian cultural period, with many of their burials found dating back 10,000 years ago. They speak the Aslian languages which is part of the Austro-Asiatic language family, as do their Senoi agriculturalist neighbours. Negritos belong to various subgroups, namely the Kensiu, Kintak, Lanoh, Jahai, Mendriq and Bateq. Those from Perak, Kedah and Pahang are also known as Sakai, the meaning of "Sakai" is debt slaves, while those from Kelantan and Terengganu were called Pangan, the forest peoples. The Senoi and Proto-Malay arrived much later probably during the Neolithic period. 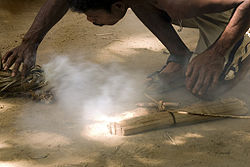 The government agency entrusted to oversee the affairs of the Orang Asli is the Jabatan Hal Ehwal Orang Asli (Department of Orang Asli Affairs) (JHEOA). This body is under the Malaysian Ministry of Rural Development, and it was first set up in 1954.[12] Among its stated objectives are to eradicate poverty among the Orang Asli, improving their health, promoting education, and improving their general livelihood. There is a high incidence of poverty among the Orang Asli. In 1997, 80% of all Orang Asli lived below the poverty line. This ratio is extremely high compared to the national poverty rate of 8.5% at that time.[13]

Some legislations which concerns Orang Asli are the National Land Code 1965, Land Conservation Act 1960, Protection of Wildlife Act 1972, National Parks Act 1980, and most importantly the Aboriginal Peoples Act 1954. The Aboriginal Peoples Act 1954 provides for the setting up and establishment of the Orang Asli Reserve Land. However, the Act also includes the power accorded to the Director-General of the JHEOA to order Orang Asli out of such reserved land at its discretion, and award compensation to affected people, also at its discretion.[14] A landmark case on this matter is in the 2002 case of Sagong Tasi v. Government of Selangor. The case was concerned with the state using its powers conferred under the 1954 Act to evict Orang Asli from gazetted Orang Asli Reserve Land. The High Court ruled in favour of Sagong Tasi, who represented the Orang Asli, and this decision was upheld by the Court of Appeal.[14]

The Orang Asli are theoretically classified as Bumiputras,[10] a status signifying indigenity to Malaysia which carries certain social, economic, and political rights, along with the Malays and the natives of Sabah and Sarawak. However, this status is generally not mentioned in the constitution.[10]

The former Prime Minister of Malaysia, Dr. Mahathir Mohamad made controversial remarks regarding the Orang Asli, saying that Orang Asli were not entitled more rights than Malays even though they were natives to the land, he posted on his blog comparing the Orang Asli in Malaysia to Native Americans in the US, Maoris in New Zealand, and Aboriginals in Australia. He was criticized by spokespeople and advocates for the Orang Asli who said that the Orang Asli desired to be recognized as the natives of Malaysia and that his statement would expose their land to businessmen and loggers.[15]