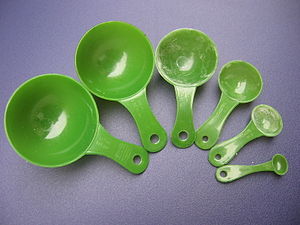 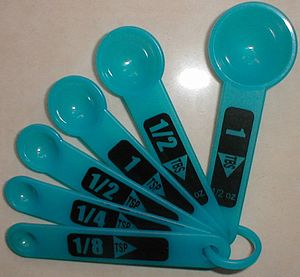 In recipes, quantities of ingredients may be specified by mass, by volume, or by count.

For most of history, most cookbooks did not specify quantities precisely, instead talking of "a nice leg of spring lamb", a "cupful" of lentils, a piece of butter "the size of a walnut", and "sufficient" salt.[1] Informal measurements such as a "pinch", a "drop", or a "hint" (soupçon) continue to be used from time to time. In the U.S.A., Fannie Farmer introduced the more exact specification of quantities by volume in her 1896 Boston Cooking-School Cook Book.

Today, most of the world prefers metric measurement by weight, though the preference for volume measurements continues in the United States ("almost exclusively"),[2] North America, Australia, and Sweden [3]. Different ingredients are measured in different ways:

Dry bulk ingredients, such as sugar and flour, are measured by weight in most of the world ("250 g flour"), and by volume in North America and Australia ("1/2 cup flour"). Small quantities of salt and spices are generally measured by volume worldwide, as few households have sufficiently precise balances to measure by weight.

Vegetables may be measured by weight or by count, despite the inherent imprecision of counts given the variability in the size of vegetables.

In most of the world, recipes use the metric system of litres (l, sometimes L) and millilitres (ml, sometimes mL), grams (g) and kilograms (kg), and degrees Celsius (°C). The word litre is almost always spelled liter in the USA.

The English-speaking world frequently measures weight in pounds (avoirdupois), with volume measures based on cooking utensils and pre-metric measures. The actual values frequently deviate from the utensils on which they were based, and there is little consistency from one country to another.

† In South Australia, a "pint" of beer is traditionally 425 mL, while most other states have metricated this value to 570mL. See Beer glasses in Australia.

The volumetric measures here are for comparison only. See below for the definition of Gallon for more details.

In Australia – since 1970 – metric utensil units have been standardized by law and Imperial measures no longer have legal status. However – it is wise to measure the actual volume of the utensil measures – particularly the 'Australian tablespoon' – see above – since many are imported from other countries with different values. Dessertspoons are standardized as part of the metric system at 10 ml, though they are not normally used in contemporary recipes. Australia is the only metricated country with a metric tablespoon of 20 ml, unlike the rest of the world, which has a 15 ml metric tablespoon.

In Germany, and to a lesser extent in France, recipes frequently refer to pounds (Pfund in German, livre in French). In each case, the unit refers to 500 g, about 10% more than an avoirdupois pound (453.59237 g).

With the advent of accurate electronic scales it has become more common to weigh liquids for use in recipes, avoiding the need for accurate volumetric utensils.[5][6][7] The most common liquids used in cooking are water and milk, milk weighing approximately the same as water in the low volumes used in cooking.

1 fl.oz. of water weighs approximately 1 ounce so a recipe calling for a UK pint (20 fl.oz.) of water can be substituted with 20 oz. of water.

More accurate weight equivalents become important in the large volumes used in commercial food production. To an accuracy of five significant digits, they are:

Even a home cook can use greater precision at times. Water at 4.0 °C (39.2 °F) may be volumetrically measured then weighed to determine an unknown measuring-utensil volume[8] without the need for a density adjustment.[9]

The U.S. uses pounds and ounces (avoirdupois) for weight, and U.S. customary units for volume. For measures used in cookbooks published in other nations navigate to the apropos regional section in Traditional measurement systems.

Measures are classified as either dry measures or fluid measures. Some of the fluid and dry measures have similar names, but the actual measured volume is quite different. A recipe will generally specify which measurement is required. U.S. recipes are commonly in terms of fluid measures.

Dashes, pinches, and smidgens are all traditionally very small amounts well under a teaspoon, but not more uniformly defined. In the early 2000s some companies began selling measuring spoons that defined a dash as 1⁄8 teaspoon, a pinch as 1⁄16 teaspoon, and a smidgen as 1⁄32 teaspoon.[11][12] Based on these spoons, there are two smidgens in a pinch and two pinches in a dash.

In domestic cooking, bulk solids, notably flour and sugar, are measured by volume, often cups, though they are sold by weight at retail. Weight measures are used for meat. Butter may be measured by either weight (1⁄4 lb) or volume (3 tbsp) or a combination of weight and volume (1⁄4 lb plus 3 tbsp); it is sold by weight but in packages marked to facilitate common divisions by eye. (As a sub-packaged unit, a stick of butter, at 1⁄4 lb [113 g], is a de facto measure in the U.S.)

Cookbooks in Canada use the same system, although pints and gallons would be taken as their Imperial quantities unless specified otherwise. Following the adoption of the metric system, recipes in Canada are frequently published with metric conversions.

Note that measurements in this section are in Imperial units

On a larger scale, perhaps for institutional cookery, it must be noted that an Imperial gallon is eight Imperial pints (160 Imperial fl.oz., 4.546 litres) whereas the US gallon is eight US pints (128 US fl.oz., 3.785 litres).

The metric system was officially adopted in the UK, for most purposes, in the 20th century and both are taught in schools and used in books. It is now mandatory for the sale of food. However, it is not uncommon to purchase goods which are measured and labeled in Metric, but the actual measure is rounded to the equivalent Imperial measure (i.e., milk labeled as 568 ml / 1 pint). In September 2007, the EU announced it would allow the UK to continue for the foreseeable future to supply certain goods in the equivalent imperial quantities allowing the traditional delivery of pints of milk and the sale of pints of beer in UK pubs.[13][14] The UK could continue to print non-metric measurements alongside metric ones on product labels. The previous deadline for the end of dual-labeling was 2010.

Volume measures of compressible ingredients have a substantial measurement uncertainty, in the case of flour of about 20%.[15] Some volume-based recipes, therefore, attempt to improve the reproducibility by including additional instructions for measuring the correct amount of an ingredient. For example, a recipe might call for “1 cup brown sugar, firmly packed”, or “2 heaping cups flour”. A few of the more common special measuring methods:

With a spatula, a spoon, or by hand, the ingredient is pressed as tightly as possible into the measuring device.

The ingredient is pressed lightly into the measuring device, only tightly enough to ensure no air pockets.

A precise measure of an ingredient, discarding all of the ingredient that rises above the rim of the measuring device. Sweeping across the top of the measure with the back of a straight knife or the blade of a spatula is a common leveling method.

Allowing a measure of an ingredient to pile up above the rim of the measuring device naturally, into a soft, rounded shape.

The maximum amount of an ingredient which will stay on the measuring device.

Such special instructions are unnecessary in weight-based recipes.