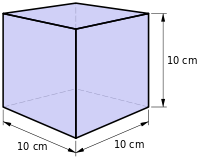 The litre (or liter — see spelling differences) is a unit of volume equal to 1 cubic decimetre (dm3), to 1,000 cubic centimetres (cm3), and to 1/1,000 cubic metre. The unit has two official symbols: the Latin letter L in lower and upper case (l and L). If the lower case L is used, it is sometimes rendered as a cursive ℓ to help distinguish it from the capital "I", although this usage has no official approval by any international bureau.

The word litre is derived from an older French unit, the litron, whose name came from Greek via Latin. The original French metric system used the litre as a base unit, and it has been used in several subsequent versions of the metric system and is accepted for use with the SI,[1] although not an official SI unit — the SI unit of volume is the cubic metre (m3). The spelling of the word used by the International Bureau of Weights and Measures is "litre"[1] and this is also the usual one in most English-speaking countries, but in American English the spelling is "liter", being endorsed by the United States.[2]

One litre of liquid water has a mass of almost exactly one kilogram, due to the gram being defined in 1795 as one cubic centimetre of water.[3]

Litres are most commonly used for items (such as fluids and berries) which are measured by the capacity or size of their container, whereas cubic metres (and derived units) are most commonly used for items measured either by their dimensions or their displacements. The litre is often also used in some calculated measurements, such as density (kg/L), allowing an easy comparison with the density of water.

We now know that density also depends on the isotopic ratios of the oxygen and hydrogen atoms in a particular water sample. Modern measurements of Vienna Standard Mean Ocean Water, which is pure distilled water with an isotopic composition representative of the average of the world’s oceans, show it has a density of 0.999975 ±0.000001 kg/L at its point of maximum density (3.984 °C) under one standard atmosphere (760 torr) of pressure.[4]

SI prefixes applied to the litre

The litre, though not an official SI unit, may be used with SI prefixes. The most commonly used derived unit is the millilitre, defined as one-thousandth of a litre, and also often referred to by the SI derived unit name "cubic centimetre". It is a commonly used measure, especially in medicine and cooking. Other units may be found in the table below, where the more often used terms are in bold. However, some authorities advise against some of them; for example, in the United States, NIST advocates using the millilitre or litre instead of the centilitre.[5]

One litre is slightly more than one U.S. liquid quart and slightly less than one imperial quart or one U.S. dry quart. A mnemonic for its volume relative to the imperial pint is "a litre of water is a pint and three quarters".

A litre is the volume of a cube with sides of 10 cm, which is slightly less than a cube of sides 4 inches (or one-third of a foot). One cubic foot would contain exactly 27 such cubes (four inches on each side), making one cubic foot approximately equal to 27 litres. One cubic foot has an exact volume of 28.316846592 litres, which is within 5% of the 27-litre approximation.

Originally, the only symbol for the litre was l (lowercase letter L), following the SI convention that only those unit symbols that abbreviate the name of a person start with a capital letter.

In many English-speaking countries, the most common shape of a handwritten Arabic digit 1 is just a vertical stroke; that is, it lacks the upstroke added in many other cultures. Therefore, the digit 1 may easily be confused with the letter l. Further, on some typewriters, particularly older ones, the unshifted L key had to be used to type the numeral 1. Even in some computer typefaces, the two characters are barely distinguishable. This caused some concern, especially in the medical community. As a result, L (uppercase letter L) was adopted as an alternative symbol for litre in 1979. The United States National Institute of Standards and Technology now recommends the use of the uppercase letter L,[7] a practice that is also widely followed in Canada and Australia. In these countries, the symbol L is also used with prefixes, as in mL and µL, instead of the traditional ml and µl used in Europe. In the UK and Ireland as well as the rest of Europe, lowercase l is used with prefixes, though whole litres are often written in full (so, "750 ml" on a wine bottle, but often "1 litre" on a juice carton).

Some style manuals, including the Publication Manual of the American Psychological Association, require a combination of the two styles of abbreviation. APA style mandates that the symbol L be used when indicating whole litres. When indicating a fraction of a litre, APA requires the use of the lowercase l.[dubious – discuss]

Prior to 1979, the symbol ℓ (script small l, U+2113), came into common use in some countries; for example, it was recommended by South African Bureau of Standards publication M33 and Canada in the 1970s. This symbol can still be encountered occasionally in some English-speaking countries, and its use is ubiquitous in Japan and South Korea. Fonts covering the CJK characters usually include not only the script small l but also four precomposed characters: ㎕, ㎖, ㎗, and ㎘ (U+3395 to U+3398) for the microlitre, millilitre, decilitre, and kilolitre. Nevertheless, it is no longer used in most countries and was never officially recognised by the BIPM or the International Organization for Standardization, and is a character often not available in currently used documentation systems.

The litre was introduced in France in 1795 as one of the new "republican units of measurement" and defined as one cubic decimetre. The original decimetre length was 44.344 lignes, which was revised in 1798 to 44.3296 lignes. This made the original litre 1.000974 of today's dm3. It was against this litre that the kilogram was constructed.

In 1879, the CIPM adopted the definition of the litre, with the symbol l (lowercase letter L).

In 1964, at the 12th CGPM conference, the original definition was reverted to, and thus the litre was once again defined in exact relation to the metre, as another name for the cubic decimetre, that is, exactly 1 dm3.[8]

In 1979, at the 16th CGPM conference, the alternative symbol L (uppercase letter L) was adopted. It also expressed a preference that in the future only one of these two symbols should be retained, but in 1990 said it was still too early to do so.[9]

In spoken English, the abbreviation "mL" (for millilitre) is often pronounced as "mil", homophonous with the colloquial term "mil", which is intended to mean "one thousandth of a metre", or in the United States, a thousandth of an inch. This generally does not create confusion because the context is usually sufficient — one being a volume, the other a linear measurement.

In European countries where the metric system was established well before the adoption of the SI standard, there is still carry-over of usage from the precursor cgs and MKS systems. In the SI system, use of prefixes for powers of 1,000 is preferred and all other multiples discouraged. However, in countries where these other multiples were already established, their use remains common. In particular, use of the centi (10−2), deci (10−1), deca (10+1), and hecto (10+2) prefixes are still common. For example, in many European countries, the hectolitre is the typical unit for production and export volumes of beverages (milk, beer, soft drinks, wine, etc.) and for measuring the size of the catch and quotas for fishing boats; decilitres are common in Switzerland and Scandinavia and sometimes found in cookbooks; centilitres indicate the capacity of drinking glasses and of small bottles. In colloquial Dutch in Belgium, a 'vijfentwintiger' and a 'drieëndertiger' (literally 'twenty-fiver' and 'thirty-threer') are the common beer glasses, the corresponding bottles mention 25 cL or 33 cL. Bottles may also be 75 cL or half size at 37.5 cL for 'artisanal' brews or 70 cL for wines or spirits. Cans come in 25 cL, 33 cL and 50 cL aka 0.5 L. Family size bottles as for soft drinks or drinking water use the litre (0.5 L, 1 L, 1.5 L, 2 L) as well as beer barrels (50 L or the half-sized 25 L). This unit is most common for all other household size containers of liquids from thermocans to buckets to bath tubs; as well as for fuel tanks and consumption for heating or by vehicles.

In countries where the metric system was adopted as the official measuring system after the SI standard was established, common usage more closely follow contemporary SI conventions. For example, in Canada, where the metric system is now in widespread use, consumer beverages are labelled almost exclusively using litres and millilitres. Hectolitres sometimes appear in industry, but centilitres and decilitres are rarely, if ever, used. Larger volumes are usually given in cubic metres (equivalent to 1 kL), or thousands or millions of cubic metres. The situation is similar in Australia, although kilolitres, megalitres, and gigalitres are commonly used for measuring water consumption, reservoir capacities and river flows.

For larger volumes of fluids, such as annual consumption of tap water, lorry (truck) tanks, or swimming pools, the cubic metre is the general unit. It is also generally for all volumes of a non-liquid nature.

Fields where it has become a common measurement for non-liquid volumes, where the capacity of the container is indicated, include: