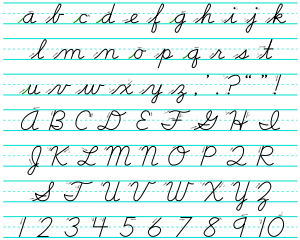 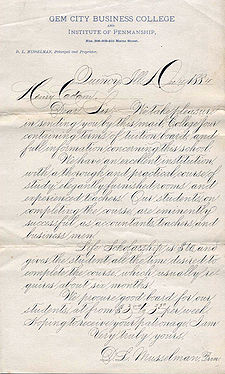 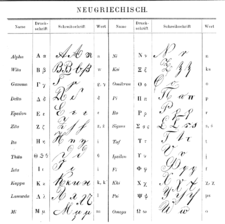 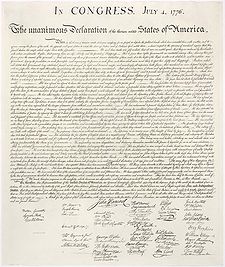 United States Declaration of Independence
This article is about the type of handwriting style. For the style of typeface simulating handwriting, see Italic type. For the rock band, see Cursive (band).

Cursive, also known as joined-up writing, joint writing, or running writing, is any style of handwriting in which the symbols of the language are written in a simplified and/or flowing manner, generally for the purpose of making writing easier or faster. In the Arabic, Latin, and Cyrillic alphabets, many or all letters in a word are connected, sometimes making a word one single complex stroke.

Cursive is considered distinct from the so-called block letter, print-script or printing method of writing, in which the letters of a word are unconnected. A distinction is sometimes made between cursive hand(writing), such as the D'Nealian method, in which the risers of the letters are slanted loops, and letters such as f, r, s, z, D, F, G, L, Q are quite distinct in shape from their printed counterparts, and italic hand(writing), such as the Getty-Dubay (also called print-writing) or Barchowsky Fluent Handwriting methods, which eliminates loops. There are no joins from j, q or y, and a few other joins are discouraged.[1]

In Hebrew cursive and Roman cursive, the letters are not connected. In the research domain of handwriting recognition, this writing style is called connected cursive, to indicate the difference between the phenomenon of italic and sloppy appearance of individual letters (cursive) and the phenomenon of connecting strokes between letters, i. e., a letter-to-letter transition without a pen lift (connected cursive).

The cursive that developed in the fifteenth century, Italian Renaissance is generally referred to as "italic" or "cursive italic." The term "italic" as it relates to handwriting is not to be confused with typed letters that slant forward. Many, but not all letters in the handwriting of the Renaissance were joined, as they are today in cursive italic.

The origin of the cursive method is associated with practical advantages of writing speed and infrequent pen lifting to accommodate the limitations of the quill. Quills are fragile, easily broken, and will spatter unless used properly. Steel dip pens followed quills. They were sturdier, but still had some limitations. The individuality of the provenance of a document was a factor also, as opposed to machine font.[2]

The term cursive derives from the 18th century French cursif from Medieval Latin cursivus, which means literally running. This term in term derives from Latin currere ("to run, hasten").[3] 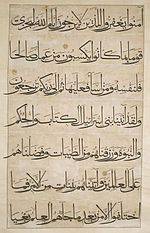 Verses from the Qur'an in Classical Arabic, written in the cursive Arabic script.

In the Classical Arabic script, letters of any given word are joined to one another by a continuous flowing line. This flowing script inspired the cursive of Medieval Latin, which in turn developed into the longhand script of English.[4]

Roman cursive is a form of handwriting (or a script) used in ancient Rome and to some extent into the Middle Ages. It is customarily divided into old (or ancient) cursive, and new cursive. Old Roman cursive, also called majuscule cursive and capitalis cursive, was the everyday form of handwriting used for writing letters, by merchants writing business accounts, by schoolchildren learning the Roman alphabet, and even emperors issuing commands. New Roman cursive, also called minuscule cursive or later Roman cursive, developed from old Roman cursive. It was used from approximately the 3rd century to the 7th century, and uses letter forms that are more recognizable to modern eyes; "a", "b", "d", and "e" have taken a more familiar shape, and the other letters are proportionate to each other rather than varying wildly in size and placement on a line.

The Greek alphabet has had several cursive forms in the course of its development. In antiquity, a cursive form of handwriting was used in writing on papyrus. It employed slanted and partly connected letter forms as well as many ligatures. Some features of this handwriting were later adopted into Greek minuscule, the dominant form of handwriting in the medieval and early modern era. In the 19th and 20th centuries, an entirely new form of cursive Greek, more similar to contemporary Western European cursive scripts, was developed. 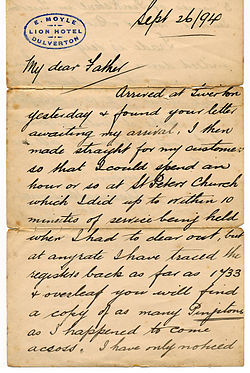 Cursive in English letter from 1894

Cursive writing was used in English before the Norman conquest. Anglo-Saxon Charters typically include a boundary clause written in Old English in a cursive script. A cursive handwriting style—secretary hand—was widely used for both personal correspondence and official documents in England from early in the 16th century.

Cursive handwriting developed into something approximating its current form from the 17th century, but its use was neither uniform, nor standardised either in England itself or elsewhere in the British Empire.  In the English colonies of the early 17th century, most of the letters are clearly separated in the handwriting of William Bradford, though a few were joined as in a cursive hand.  In England itself, Edward Cocker had begun to introduce a version of the French rhonde style, which was then further developed and popularised throughout the British Empire in the 17th and 18th centuries as round hand by John Ayers and William Banson.[5]

Back in the American colonies, on the eve of their independence from the Kingdom of Great Britain, it is notable that Thomas Jefferson joined most, but not all of the letters when drafting the United States Declaration of Independence.  However, a few days later, Timothy Matlack professionally re-wrote the presentation copy of the Declaration in a fully joined, cursive hand. Eighty-seven years later, in the middle of the 19th century, Abraham Lincoln drafted the Gettysburg Address in a cursive hand that would not look out of place today.

Note that not all such cursive, then or now, joined all of the letters within a word.

In both the British Empire and the United States in the 18th and 19th centuries, before the typewriter, professionals used cursive for their correspondence. This was called a "fair hand", meaning it looked good, and firms trained their clerks to write in exactly the same script. 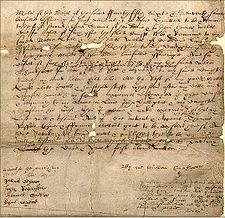 In the early days of the post office, letters were written in cursive — and to fit more text on a single sheet, the text was continued in lines crossing at 90 degrees from the original text, see Crossed letter.[citation needed] Block letters were not suitable for this.

Although women's handwriting had noticeably different particulars from men's[citation needed], the general forms were not prone to rapid change. In the mid-19th century, comparatively few children were not taught the contemporary cursive; in the United States, this usually occurred in second or third grade (around ages seven to nine). Few simplifications appeared as the middle of the 20th century approached.

After the 1960s, there arose an argument that cursive instruction was more difficult than it needed to be: that conventional cursive was unnecessary, and it was easier to write forms of simply slanted characters called italic. Because of this, a number of various new forms of cursive appeared in the late 20th century, including D'Nealian, Getty-Dubay, and Barchowsky Fluent Handwriting.Most of these models lacked the craftsmanship of earlier styles such as Spencerian Script, Zaner-Bloser, and the Palmer Method, but almost all were less demanding. With the range of options available, handwriting became non-standardized across different school systems in different English-speaking countries. 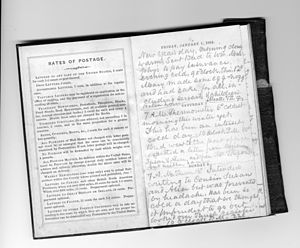 Cursive handwriting from the nineteenth-century USA.

With the advent of typewriters and computers, cursive as a way of formalizing correspondence has fallen out of favor. Most tasks which would have once required a "fair hand" are now done using word processing and a printer. However, western etiquette advocates the use of longhand in personal notes (e.g., thank-you notes) to provide a sense that a real person is involved in the correspondence.

The teaching of cursive has been de-emphasized in many public schools,[citation needed] but is still used occasionally for situations such as timed tests with large writing portions, where it is considered faster by some. Also being able to write in a fair-hand is still looked upon as a sign of literacy in many countries.[where?] In some countries, the quality of one's cursive is used to determine the appointment of public office.[where?]

In one academic study, first graders who could write only 10 to 12 letters per minute were given 45 minutes of handwriting instruction for nine weeks; their writing speed doubled, their expressed thoughts became more complex, and their sentence construction skills increased.[7]. This study is sometimes cited as support for teaching cursive. However, the style of handwriting used in this research was not a cursive style.

On the 2006 SAT, a United States post-secondary education entrance exam, only 15 percent of the students wrote their essay answers in cursive.[7]

In a 2007 survey of 200 teachers of first through third grades in all 50 American states, ninety percent of respondents said their schools required the teaching of cursive.[8]

A 2008 nationwide survey found elementary school teachers lacking formal training in teaching handwriting to students.  Only 12 percent of teachers reported having taken a course in how to teach it.[9]

In 2011, the American states of Indiana and Hawaii announced that their schools will no longer be required to teach cursive (but will still be permitted to), and instead will be required to teach "keyboard proficiency". As of 2011 the same was true of Illinois.  Since the nation-wide proposal of the Common Core State Standards in 2009, which do not include instruction in cursive, the standards had been adopted by 44 states as of July 2011, all of which have debated whether to augment them with cursive.[10][11]

The Russian Cursive Cyrillic alphabet is used (instead of the block letters) when handwriting the modern Russian language. While several letters resemble their Latin counterparts, many of them represent different sounds. Most handwritten Russian, especially personal letters and schoolwork, uses the cursive Russian (Cyrillic) alphabet. Most children in Russian schools are taught by 1st grade how to write using this Russian script.

Cursive forms of Chinese characters are used in calligraphy; "running script" is the semi-cursive form and "grass script" is the cursive. The running aspect of this script has more to do with the formation and connectedness of strokes within an individual character than with connections between characters as in Western connected cursive. The latter are rare in Hanzi and the derived Japanese Kanji characters which are usually well separated by the writer.