Dipylon inscription, one of the oldest known samples of the use of the Greek alphabet, ca. 740 BC

The Greek alphabet is the script that has been used to write the Greek language since at least 730 BC (the 8th century BC).[2] The alphabet in its classical and modern form consists of 24 letters ordered in sequence from alpha to omega. The Greek alphabet was derived from the earlier Phoenician alphabet, from which it differs by being the first alphabet that provides a full representation of one written symbol per sound both for vowels as well as consonants. The Greek alphabet in turn is the ancestor of numerous other European and Middle Eastern scripts that follow the same structural principle, among them Cyrillic and Latin.[3]

The Greek alphabet reached its classical form around 400 BC, with some details, including the use of diacritic marks becoming fixed only during the following centuries of the Hellenistic and Roman period. The sequence of letters has remained unchanged since then up to the present day, although the sound values of individual letters have changed considerably due to phonological changes between ancient and modern Greek. While it was originally written with only a single, majuscule form for each letter, the Greek alphabet developed a second set of letter forms, the minuscule letters, during the middle ages, resulting in the modern system of uppercase and lowercase forms.

In addition to being used for writing Greek, both ancient and modern, the letters of the Greek alphabet are today used as technical symbols and labels in many domains of mathematics, science and other fields. 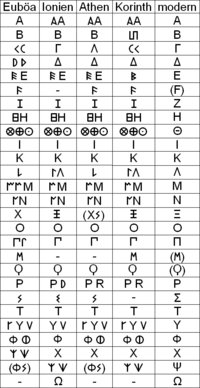 The Greek alphabet emerged in the late 9th century BC or early 8th century BC[4] Another, unrelated writing system, Linear B, had been in use to write the Greek language during the earlier Mycenean period, but the two systems are separated from each other by a hiatus of several centuries, the so-called Greek Dark Ages. The Greeks adopted the alphabet from the earlier Phoenician alphabet, a member of the family of closely related West Semitic scripts. The most notable change made in adapting the Phoenician system to Greek was the introduction of vowel letters. According to a definition used by some modern authors, this feature makes Greek the first "alphabet" in the narrow sense,[3] as distinguished from the purely consonantal alphabets of the Semitic type, which according to this terminology are called "abjads".[5]

Greek initially took over all of the 22 letters of Phoenician. Five of them were reassigned to denote vowel sounds: the glide consonants /j/ (yodh) and /w/ (waw) were used for [i] (Ι, iota) and [u] (Υ, upsilon) respectively; the glottal stop consonant /ʔ/ ('aleph) was used for [a] (Α, alpha); the pharyngeal /ʕ/ (ʿayin) was turned into [o] (Ο, omicron); and the letter for /h/ (he) was turned into [e] (Ε, epsilon). A doublet of waw was also borrowed as a consonant for [w] (Ϝ, digamma). In addition, the Phoenician letter for the emphatic glottal /ħ/ (heth) was borrowed in two different functions by different dialects of Greek: as a letter for /h/ (Η, heta) by those dialects that had such a sound, and as an additional vowel letter for the long /ɛː/ (Η, eta) by those dialects that lacked the consonant. Eventually, a seventh vowel letter for the long /ɔː/ (Ω, omega) was introduced.

Greek also introduced three new consonant letters for its aspirated plosive sounds and consonant clusters: Φ (phi) for /pʰ/, Χ (chi) for /kʰ/ and Ψ (psi) for /ps/. In western Greek variants, Χ was instead used for /ks/ and Ψ for /kʰ/ The origin of these letters is a matter of some debate.

Conversely, three of the original Phoenician letters dropped out of use before the alphabet took its classical shape: the letter Ϻ (san), which had been in competition with Σ (sigma) denoting the same phoneme /s/; the letter Ϙ (qoppa), which was redundant with Κ (kappa) for /k/, and Ϝ (digamma), whose sound value /w/ dropped out of the spoken language before or during the classical period.

Greek was originally written predominantly from right to left, just like Phoenician, but scribes could freely alternate between directions. For a time, a writing style with alternating right-to-left and left-to-right lines (called boustrophedon, literally "ox-turning", after the manner of an ox ploughing a field) was common, until in the classical period the left-to-right writing direction became the norm. Individual letter shapes were mirrored depending on the writing direction of the current line.

There were initially numerous local variants of the Greek alphabet, which differed in the use and non-use of the additional vowel and consonant symbols and several other features. A form of western Greek native to Euboea, which among other things had Χ for /ks/, was transplanted to Italy by early Greek colonists, and became the ancestor of the Old Italic alphabets and ultimately, through Etruscan, of the Latin alphabet. Athens used a local form of the alphabet until the 5th century BC; it lacked the letters Ξ and Ψ as well as the vowel symbols Η and Ω. The classical 24-letter alphabet that became the norm later was originally the local alphabet of Ionia; this was adopted by Athens in 403 BC under archon Eucleides and in most other parts of the Greek-speaking world during the 4th century BC. 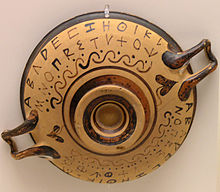 In the Hellenistic period, Aristophanes of Byzantium introduced diacritics to Greek letters, to specify features of pronunciation that were being lost from the popular spoken language at around that time: the pair of rough and smooth breathing, to denote the absence or presence of an initial /h/, and the set of three accent marks (acute, grave and circumflex) to denote distinctions of classical Greek pitch accent. During the Middle Ages, the Greek scripts underwent changes paralleling those of the Latin alphabet: while the old forms were retained as a monumental script, uncial and eventually minuscule hands came to dominate.

Each of the Phoenician letter names was a word that began with the sound represented by that letter; thus ʾaleph, the word for "ox", was adopted for the glottal stop /ʔ/, bet, or "house", for the /b/ sound, and so on. When the letters were adopted by the Greeks, most of the Phoenician names were maintained or modified slightly to fit Greek phonology; thus, ʾaleph, bet, gimel became alpha, beta, gamma. These borrowed names had no meaning in Greek except as labels for the letters. However, a few signs that were added or modified later by the Greeks do in fact have names with meanings. For example, o mikron and o mega mean "small o" and "big o". Similarly, e psilon and u psilon mean "plain e" and "plain u", respectively.

Below is a table listing the Greek letters, as well as their forms when romanized. The table also provides the equivalent Phoenician letter from which each Greek letter is derived. Pronunciations transcribed using the International Phonetic Alphabet.

Some letters can occur in variant shapes, mostly inherited from medieval minuscule handwriting. While their use in normal typography of Greek is purely a matter of font styles, some such variants have been given separate encodings in Unicode.

A digraph is a pair of letters used to write one sound or a combination of sounds that does not correspond to the written letters in sequence. The orthography of Greek includes several digraphs, including various pairs of vowel letters that used to be pronounced as diphthongs but have been shortened to monophthongs in pronunciation. Many of these are characteristic developments of modern Greek, but some, such as ΟΥ (pronounced [oː], then [uː]) and ΕΙ (pronounced [eː], then [iː]), were already present in Classical Greek. None of them is regarded as a letter of the alphabet.

During the Byzantine period, it became customary to write the silent iota in digraphs as an iota subscript (ᾳ, ῃ, ῳ).

In the polytonic orthography traditionally used for ancient Greek, vowels can carry diacritics, namely accents and breathings. The accents are the acute accent (ά), the grave accent (ὰ), and the circumflex accent (α̃ or α̑). In Ancient Greek, these accents marked different forms of the pitch accent on a vowel. By the end of the Roman period, pitch accent had evolved into a stress accent, and in later Greek all of these accents marked the stressed vowel. The breathings are the rough breathing (ἁ), marking an /h/ sound at the beginning of a word, and the smooth breathing (ἀ), marking its absence. The letter rho (ρ), although not a vowel, always carries a rough breathing when it begins a word. Another diacritic used in Greek is the diaeresis (¨), indicating a hiatus.

In 1982, the old spelling system, known as polytonic, was simplified to become the monotonic system, which is now official in Greece. The accents have been reduced to one, the tonos, and the breathings were abolished.

Use of the Greek script for other languages

The Greek alphabet has been adopted at various times and in various places to write other languages.[6] For some languages, additional letters were introduced.

The Greek alphabet gave rise to various others:[3]

It is also considered a possible ancestor of the Armenian alphabet, and had an influence on the development of the Georgian alphabet.

Greek symbols are traditionally used as names in mathematics, physics and other sciences. When combined with Latin characters, the Latin characters usually indicate variables while the Greek ones indicate parameters. Many symbols have traditional uses, such as lower case epsilon (ε) for an arbitrarily small positive number, lower case pi (π) for the ratio of the circumference of a circle to its diameter, capital sigma (Σ) for summation, and lower case sigma (σ) for standard deviation.

For the usage in computers, a variety of encodings have been used for Greek online, many of them documented in RFC 1947.

Unicode supports polytonic orthography well enough for ordinary continuous text in modern and ancient Greek, and even many archaic forms for epigraphy. With the use of combining characters, Unicode also supports Greek philology and dialectology and various other specialized requirements. However, Unicode still falls short in rendering the full range of Greek letter forms. Most current text rendering engines do not support diacritics well, so, though alpha with macron and acute can be represented as U+03B1 U+0304 U+0301, this rarely renders well: ᾱ́.

There are 2 main blocks of Greek characters in Unicode. The first is "Greek and Coptic" (U+0370 to U+03FF). This block is based on ISO 8859-7 and is sufficient to write Modern Greek. There are also some archaic letters and Greek-based technical symbols.

This block also supports the Coptic alphabet. Formerly most Coptic letters shared codepoints with similar-looking Greek letters; but in many scholarly works, both scripts occur, with quite different letter shapes, so as of Unicode 4.1, Coptic and Greek were disunified. Those Coptic letters with no Greek equivalents still remain in this block (U+03E2 to U+03EF).

To write polytonic Greek, one may use combining diacritical marks or the precomposed characters in the "Greek Extended" block (U+1F00 to U+1FFF).

Encodings with a subset of the Greek alphabet