The Georgian alphabet (Georgian: ქართული დამწერლობა, [kʰɑrtʰuli dɑmtsʼɛrlɔbɑ], literally "Georgian script") is the writing system used to write the Georgian language and other Kartvelian languages (Mingrelian, Svan, sometimes Laz), and occasionally other languages of the Caucasus such as Ossetic and Abkhaz during the 1940s.[1] The Georgian language has phonemic orthography and the modern alphabet has thirty-three letters.

The word meaning "alphabet", Georgian: ანბანი [anbani], is derived from the names of the first two letters of each of the three Georgian alphabets. The three alphabets look very different from one another but share the same alphabetic order and letter names. The alphabets may be seen mixed to some extent, though Georgian is officially unicameral meaning there is normally no distinction between upper and lower case in any of the alphabets. 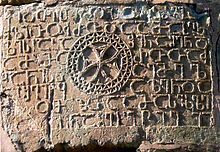 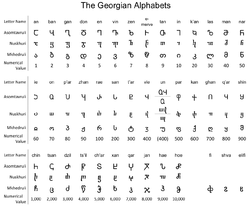 The three forms of the Georgian alphabet

The writing of the Georgian language has progressed through three forms, known by their Georgian names: Asomtavruli, Nuskhuri, and Mkhedruli. They have always been distinct alphabets, even though they have been used together to write the same languages, and even though these alphabets share the same letter names and collation. Although the most recent alphabet, Mkhedruli, contains more letters than the two historical ones, those extra letters are no longer needed for writing modern Georgian.

The Georgian kingdom of Iberia converted to Christianity in 326 AD. Scholars believe that the creation of an Old Georgian alphabet was instrumental in making religious scripture more accessible to the Georgians. This happened in the 4th or 5th century, not long after conversion. The oldest uncontested example of Georgian writing is an Asomtavruli inscription from 430 AD in a church in Bethlehem.

It has been asserted[2][3] that the Georgian alphabet was created by Mesrop Mashtots (who also created the Armenian alphabet around 405 AD and the Caucasian Albanian alphabet). This viewpoint is accepted by encyclopaedias,[4][5][6][7] as well as by authoritative scholars.[2][3][8][9] Other authorities such as John Greppin and A.G. Perikhanian have concluded that while Mesrop Mashtots may not have been the only creator of the Georgian alphabet, it could not have appeared without his participation.[10][11] The Encyclopaedia Britannica suggests that the Old Georgian script must have been derived from the Greek alphabet, on account of the order of the alphabet and the shapes of some of the characters, although the shapes of the majority of the signs appear to be a result of a free creation of its inventor.[12]

Georgian historical tradition attributes the invention of the Georgian alphabets to the semi-mythical Parnavaz I of Iberia in the 3rd century BC. Georgian scholars have asserted that the Georgian alphabet was created before Mesrop Mashtots.[13][14][15][16] The modern Georgian scholar Levan Chilashvili, on the basis of dating the Nekresi inscription in eastern Georgia to the 1st–2nd century AD, claimed that Parnavaz probably created the scripts in order to translate the Avesta (sacred Zoroastrian writings) into Georgian. However, a pre-Christian origin for the Georgian scripts has not been firmly supported by archaeological evidence. According to Donald Rayfield, the assumption that the Georgian script has pre-Christian origin, is rather unfounded and was not confirmed by archaeological findings.[3] Stephen H. Rapp, too, has questioned such a dating.[17] Victor Schnirelmann has noted that the Georgian historians' somewhat painful attitude towards Mesrop Mashtots is conditioned by the "myth of some pure original indigenous culture."[18] 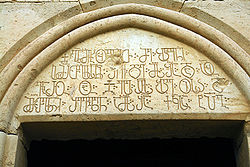 Asomtavruli, also known as Mrgvlovani, is the historical, monumental, and oldest form of the Georgian alphabet. Asomtavruli (ასომთავრული, "capital letters") derives from aso (ასო, "letter, type") and mtavari (მთავარი, "main, chief, principal, head"). Mrgvlovani (მრგვლოვანი, "rounded") is related to the word mrgvali (მრგვალი, "round"). Despite its common Georgian name, this rounded alphabet was originally purely unicameral, just like the modern Georgian alphabet. Examples of the earliest Asomtavruli are still preserved in monumental inscriptions such as those of the Georgian church in Bethlehem (near Jerusalem, 430 AD) and the church of Bolnisi Sioni near Tbilisi (4th-5th centuries).

This unicameral alphabet is still used today in some section headings and book titles, and sometimes used in a pseudo-bicameral way by varying the glyph sizes for creating capitals. Since it is no longer used for writing Georgian, it has also been reused in a creative way for writing capital letters, along with letters of one of the two other Georgian alphabets.

Incidentally, a unique local form of Aramaic writing known as Armazuli (არმაზული დამწერლობა, armazuli damts'erloba, i.e. the "Armazian script", derived from the name of the god Armazi) existed before that, as demonstrated by the 1940s discovery of a bilingual Greco-Aramaic inscription at Mtskheta, Georgia. It is conceivable that local pre-Christian records did exist, but were subsequently destroyed by zealous Christians. Therefore, many found more palatable the idea that the medieval Georgian chronicles crediting Parnavaz with the creation of Georgian writing actually refer to the introduction of a local form of written Aramaic during his reign.[17]

The Nuskhuri (ნუსხური "minuscule, lowercase"), the ecclesiastical alphabet first appeared in the 9th century. It was mostly used in hagiography. Nuskhuri is related to the word nuskha (ნუსხა "inventory, schedule").

The forms of the Khutsuri letters may have been derived from the northern Arsacid variant of the Pahlavi (or Middle Iranian) script, which itself was derived from the older Aramaic, although the direction of writing (from left to right), the use of separate symbols for the vowel sounds, the numerical values assigned to the letters in earlier times, and the order of the letters all point to significant Greek influence on the script.[19]

However, the Georgian linguist Tamaz Gamkrelidze argues that the forms of the letters are freely invented in imitation of the Greek model rather than directly based upon earlier forms of the Aramaic alphabet, even though the Georgian phonological inventory is very different from Greek.

Like the monumental Asomtavruli alphabet, this squared alphabet was initially purely unicameral. However, it has also been used also along with the Asomtavruli alphabet (serving as capital letters in religious manuscripts) to form the Khutsuri (ხუცური "ecclesiastical") bicameral style that is still used sometimes today. 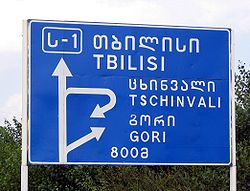 The modern alphabet, called Mkhedruli (მხედრული, "cavalry" or "military"), first appeared in the 11th century. It was used for non-religious purposes up until the 19th century, when it completely replaced the Khutsuri style (that used the two previous alphabets). Mkhedruli is related to the word mkhedari (მხედარი, "horseman", "knight", or "warrior"); Khutsuri is related to the term khutsesi (ხუცესი, "elder" or "priest").

Like the two other alphabets, the Mkhedruli alphabet is purely unicameral. However, certain modern writers have experimented with using Asomtavruli letters as capitals, similarly to Khutsuri script style. In some cases, this may be a conflation with the religious Khutsuri style rather than the result of a creative design choice. Georgians often consider this bicameral use of Mkhedruli an error because some Mkhedruli letters lack equivalents in the other alphabets. Others use the Mkhedruli alphabet alone in a pseudo-bicameral way, adapting letter sizes to create capital letters, known as Mtavruli for titles and headings. Mtavruli (მთავრული) means "titlecase" and is an appropriate tribute to the older Asomtavruli.

Eight of the forty-one Mkhedruli letters (shaded above) are now obsolete. Five of these, ⟨ჱ⟩ (he), ⟨ჲ⟩ (hie), ⟨ჳ⟩ (vie), ⟨ჴ⟩ (qar), and ⟨ჵ⟩ (hoe) were used in Old Georgian. These letters were discarded by the Society for the Spreading of Literacy Among Georgians, founded by Ilia Chavchavadze in 1879, and were either dropped entirely or replaced by the sounds they had become. The last three, ⟨ჶ⟩ (fi), ⟨ჷ⟩ (shva), and ⟨ჸ⟩ (elifi), were later additions to the Georgian alphabet used to represent sounds not present in Georgian proper, and are used to write other languages in the region. Also obsolete in modern Georgian is a variant of the letter ⟨უ⟩ (un), differentiated using a diacritic: ⟨უ̌⟩ or ⟨უ̂⟩.

Writing in Asomtavruli is often highly stylized. Since the time of Vakhtang I of Iberia in the 5th century, writers readily formed ligatures, intertwined letters, and placed letters within letters. The first ligature below was a feature of 6th century Sassanid period currency. The second and third examples come from the arch of the David Gareja Monastery, pictured above. Ligatures flourished during the Middle Ages and could represent up to three letters.

Nuskhuri, like Asomtavruli is also often highly stylized. Writers readily formed ligatures and abbreviations for nomina sacra, including diacritics called karagma, which resemble titla. Because writing materials such as vellum were scarce and therefore precious, abbreviating was a practical measure widespread in manuscripts and hagiography by the 11th century.[20] Some common examples include romeli, "which" (

In the 11th – 17th centuries, Mkhedruli also came to employ digraphs to the point that they were obligatory, requiring adhesion to a complex system. For example, ⟨დ⟩ don and ⟨ა⟩ an make "da":

In the older Asomtavruli, the sound /u/ was represented by the digraph ⟨ႭჃ⟩ or as ⟨Ⴓ⟩, a modified ⟨Ⴍ⟩. Nuskhuri saw the combination of the digraph ⟨ⴍⴣ⟩ into a ligature, ⟨ⴓ⟩ (cf. Greek ου, Cyrillic Ѹ/Ꙋ). However, Mkhedruli normally uses only ⟨უ⟩ as opposed to a digraph or ligature, and uses ⟨უ⟩ instead of obsolete ⟨ჳ⟩ (above) to represent the value 400.

This table lists only the modern unicameral Mkhedruli alphabet (i.e. 33 letters that are convertible to the other two alphabets, excluding the 8 Mkhedruli letters that are now obsolete). "National" is the official transliteration system used by the Georgian government, while "Laz" is the official system used in northeastern Turkey for the Laz language.

The Georgian alphabet was added to the Unicode Standard in October, 1991 with the release of version 1.0.