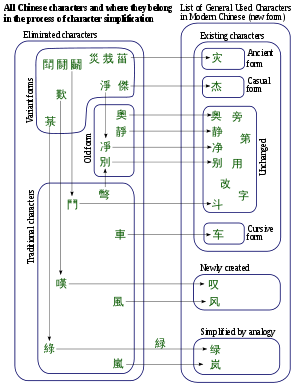 An Euler diagram showing where Traditional Chinese characters fit in the process of character simplification.

The use of such words as "complex", "standard" and "proper" in the context of such a visceral subject as written language arouses strong emotional reactions, especially since there are also political ramifications in this case. Debate on traditional and simplified Chinese characters explores the differences of opinion that exist on this matter within Chinese-speaking regions.