Oracle bone script (Chinese: 甲骨文; pinyin: jiǎgǔwén; literally "shell bone writing") refers to incised (or, rarely, brush-written[1]) ancient Chinese characters found on oracle bones, which are animal bones or turtle shells used in divination in Bronze Age China. The vast majority[2] record the pyromantic divinations of the royal house of the late Shang dynasty at the capital of Yin (modern Anyang, Henan Province); dating of the Anyang examples of oracle bone script varies from ca. 14th -11th centuries BCE[3][4] to ca. 1200 to ca. 1050 BC.[5][6][7][8] Very few oracle bone writings date to the beginning of the subsequent Zhou Dynasty, because pyromancy fell from favor and divining with milfoil became more common.[9] The late Shang oracle bone writings, along with a few contemporary characters in a different style cast in bronzes, constitute the earliest[10] significant corpus of Chinese writing, which is essential for the study of Chinese etymology, as Shang writing is directly ancestral to the modern Chinese script. It is also the oldest member and ancestor of the Chinese family of scripts.

It is certain that Shang-lineage writing underwent a period of development before the Anyang oracle bone script, because of its mature nature[11] however, no significant quantity of clearly identifiable writing from before or during the early to middle Shang cultural period has been discovered. The few Neolithic symbols found on pottery, jade, or bone at a variety of cultural sites in China are very controversial,[12] and there is no consensus that any of them are directly related to the Shang oracle bone script.

The oracle bone script of the late Shang appears archaic and pictographic in flavor, as does its contemporary, the Shang writing on bronzes. The earliest oracle bone script appears even more so than examples from late in the period (thus some evolution did occur over the roughly 200-year period).[13] Comparing oracle bone script to both Shang and early Western Zhou period writing on bronzes, oracle bone script is clearly greatly simplified, and rounded forms are often converted to rectilinear ones; this is thought to be due to the difficulty of engraving the hard, bony surfaces, compared with the ease of writing them in the wet clay of the molds the bronzes were cast from. The more detailed and more pictorial style of the bronze graphs is thus thought to be more representative of typical Shang writing (as would have normally occurred on bamboo books) than the oracle bone script forms, and this typical style continued to evolve into the Zhou period writing and then into the seal script of the Qin in the late Zhou period.

It is known that the Shang people also wrote with brush and ink, as brush-written graphs have been found on a small number of pottery, shell and bone, and jade and other stone items,[14] and there is evidence that they also wrote on bamboo (or wooden) books[15] just like those found from the late Zhou to Hàn periods, because the graphs for a writing brush (聿 yù[16]) and bamboo book (冊 cè, a book of thin vertical slats or slips with horizontal string binding, like a Venetian blind turned 90 degrees) are present in the oracle bone script.[14][17][18] Since the ease of writing with a brush is even greater than that of writing with a stylus in wet clay, it is assumed that the style and structure of Shang graphs on bamboo were similar to those on bronzes, and also that the majority[14][17] of writing occurred with a brush on such books. Additional support for this notion includes the reorientation of some graphs,[19] by turning them 90 degrees as if to better fit on tall, narrow slats; this style must have developed on bamboo or wood slat books and then carried over to the oracle bone script. Additionally, the writing of characters in vertical columns, from top to bottom, is for the most part carried over from the bamboo books to oracle bone inscriptions.[20] In some instances lines are written horizontally so as to match the text to divinatory cracks, or columns of text rotate 90 degrees in mid stream, but these are exceptions to the normal pattern of writing,[21] and inscriptions were never read bottom to top.[22] The vertical columns of text in Chinese writing are traditionally ordered from right to left; this pattern is found on bronze inscriptions from the Shang dynasty onward. Oracle bone inscriptions, however, are often arranged so that the columns begin near the centerline of the shell or bone, and move toward the edge, such that the two sides are ordered in mirror-image fashion.[20]

Despite the archaic and relatively pictorial appearance of the oracle bone script, it is in fact a fully functional and fairly mature[23] writing system, i.e., able to record the Old Chinese language in its entirety and not just isolated kinds of meaning.[citation needed] This level of maturity clearly implies an earlier period of development of at least several hundred years.[24] From their presumed origins as pictographs and signs, by the Shang dynasty, most graphs were already conventionalized[25] in such a simplified fashion that the meanings of many of the pictographs are not immediately apparent. Compare, for instance, the third and fourth graphs in the row below. Without careful research to compare these to later forms, one would probably not know that these represented 豕 shĭ 'swine' and 犬 quǎn 'dog' respectively. As Boltz (1994 & 2003 p. 31-33) notes, most of the oracle bone graphs are not depicted realistically enough for those who do not already know the script to recognized what they stand for; although pictographic in origin they are no longer pictographs in function. Boltz instead calls them zodiographs (p. 33), reminding us that functionally they represent words, and only through the words do they represent concepts, while for similar reasons Qiu labels them semantographs.

By the late Shang oracle bone script, the graphs had already evolved into a variety of mostly non-pictographic functions[citation needed], including all the major types of Chinese characters now in use. Phonetic loan graphs, semantic-phonetic compounds, and associative compounds were already common. One structural and functional analysis of the oracle bone characters found that they were 23% pictographs, 2% simple indicatives, 32% associative compounds, 11% phonetic loans, 27% phonetic-semantic compounds, and 6% uncertain.[26]

Despite its status as a fully functional and fairly mature writing system, the oracle bone script is not actually 100% mature – the form of a very few graphs changes depending on context[citation needed], and on occasion the order of the graphs does not quite match that of the language[citation needed]. By the early Western Zhou period, these traits had vanished, but in both periods, the script was not highly regular or standardized; variant forms of graphs abound (see the many ways to write yín (寅)[27] the 3rd Earthly Branch to the left), and the size and orientation of graphs is also irregular. A graph when inverted horizontally generally refers to the same word, and additional components are sometimes present without changing the meaning. Not until the standardization carried out in the Qín dynasty seal script did these irregularities end.

Of the thousands of characters found from all the bone fragments, the majority remain undeciphered. One good example is shown in the fragment shown below, labeled "oracle bone script for Spring". The top left character in this image has no known modern Chinese counterpart. One of the better known characters however is shown directly beneath it looking like an upright isosceles triangle with a line cutting through the upper portion. This

is the oracle bone script character for 王 wáng ("king"). 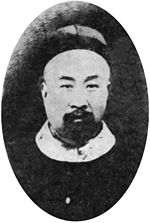 Among the major Chinese scholars making significant contributions to the study of the oracle bone writings, especially early on, were: Wang Yirong (王懿榮; 1845–1900), who in 1899 recognized the characters as being ancient Chinese writing; Liu E (刘鶚; 1857–1909), who collected five thousand oracle bone fragments, published the first volume of examples and rubbings in 1903, and correctly identified thirty-four characters; Sūn Yíràng (孫詒讓, 1848–1908), the first serious researcher of oracle bones; Luó Zhènyù (羅振玉, 1866–1940), who collected over 30,000 oracle bones and published several volumes, identified the names of the Shang kings, and thus positively identified the oracle bones as being artifacts from the Shang reign; Wáng Gúowéi (王國維, 1877–1927), who demonstrated that the chronology of the Shang kings matched that in Sima Qian’s Records of the Historian; Dong Zuobin (董作賓, 1895–1963), who identified the diviners and established a chronology for the oracle bones as well as numerous other dating criteria; and Guo Moruo (郭沫若, 1892–1978).[28]

The numbers of oracle bones with inscriptions contemporaneous with the end of Shang and the beginning of Zhou is relatively few in number compared with the entire corpus of Shang inscriptions. Until 1977, only a few inscribed shell and bone artifacts. Zhou related inscriptions have been unearthed since the 1950s, with find fragments having only one or two characters. In August 1977, a large hoard of several thousand pieces was discovered in an area closely related to the heartland of the ancient Zhou. Of these, only two or three hundred items were inscribed.

The following is an example of a Zhou inscription.[29][30]