East Asian calligraphy is a form of calligraphy widely practised and revered in the Sinosphere. This most often includes China, Japan, Korea, and Vietnam. The East Asian calligraphic tradition originated and developed from China. There is a general standardization of the various styles of calligraphy in this tradition. East Asian calligraphy and ink and wash painting are closely related, since they are accomplished using similar tools and techniques. Chinese painting and calligraphy distinguish themselves from other cultural arts because they emphasize motion and are charged with dynamic life. According to Stanley-Baker, "Calligraphy is sheer life experienced through energy in motion that is registered as traces on silk or paper, with time and rhythm in shifting space its main ingredients."[1] Calligraphy has also led to the development of many forms of art in East Asia, including seal carving, ornate paperweights, and inkstones.

As a discipline calligraphy is, at the basic level, a pursuit －書法 Chinese: shūfǎ, "the rules of writing Han characters"[4]－ focused on writing well. Students aim to obtain the writing characteristics of exemplary pieces of writing. Elementary school students practice calligraphy in this way, as do elders practicing temporary calligraphy, without aspiring to artistic creation.

Calligraphy is also considered an art － 藝術/艺术 Chinese: yìshù, a relatively recent word meaning "art",[5] where works are appreciated more or only for their aesthetic qualities.

The English word "Calligraphy" refers to that which is "beautiful writing", thus including both aspects. 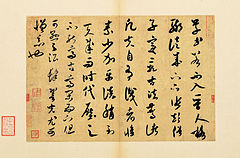 Chinese calligraphy written by Song Dynasty (A.D. 1051-1108) poet Mi Fu. The style Xinshu display there is specific by its fast speed and low pressure of the ink-brush on the paper. The calligrapher may play with speed, pressure, stroke order to create visual effects which may be in accordance with the emotions within the text, such is in the most revered Preface to the Orchid Pavilion by Wang Xizhi.[6]

The oldest extant Chinese characters from ancient China are Jiǎgǔwén characters carved on ox scapulas and tortoise plastrons. Brush-written examples decay over time and have not survived. During the divination ceremony, after the cracks were made, characters were written with a brush on the shell or bone to be later carved.(Keightley, 1978). With the development of Jīnwén (Bronzeware script) and Dàzhuàn (Large Seal Script) "cursive" signs continued. Moreover, each archaic kingdom of current China had its own set of characters.

In Imperial China, the graphs on old steles — some dating from 200 BC, and in Xiaozhuan style — are still accessible.

In about 220 BC, the emperor Qin Shi Huang, the first to conquer the entire Chinese basin, imposed several reforms, among them Li Si's character unification, which created a set of 3300 standardized Xiǎozhuàn characters.[7] Despite the fact that the main writing implement of the time was already the brush, little paper survives from this period, and the main examples of this style are on steles.

The Lìshū style (clerical script) which is more regularized, and in some ways similar to modern text, were also authorised under Qin Shi Huangdi.[8]

Kǎishū style (traditional regular script) — still in use today — and attributed to Wang Xizhi (王羲之, 303-361) and his followers, is even more regularized.[8] Its spread was encouraged by Emperor Mingzong of Later Tang (926-933), who ordered the printing of the classics using new wooden blocks in Kaishu. Printing technologies here allowed shapes to stabilize. The Kaishu shape of characters 1000 years ago was mostly similar to that at the end of Imperial China.[8] But small changes have been made, for example in the shape of 广 which is not absolutely the same in the Kangxi Dictionary of 1716 as in modern books. The Kangxi and current shapes have tiny differences, while stroke order is still the same, according to old style.[9]

Styles which did not survive include Bāfēnshū, a mix of 80% Xiaozhuan style and 20% Lishu.[8] Some Variant Chinese characters were unorthodox or locally used for centuries. They were generally understood but always rejected in official texts. Some of these unorthodox variants, in addition to some newly created characters, were incorporated in the Simplified Chinese character set.

Cursive styles such as Xíngshū (semi-cursive or running script) and Cǎoshū (cursive or grass script) are less constrained and faster, where more movements made by the writing implement are visible. These styles' stroke orders vary more, sometimes creating radically different forms. They are descended from Clerical script, in the same time as Regular script (Han Dynasty), but Xíngshū and Cǎoshū were use for personal notes only, and were never used as standard. Caoshu style was highly appreciated during Emperor Wu of Han reign (140-87).[8]

Examples of modern printed styles are Song from the Song Dynasty's printing press, and sans-serif. These are not considered traditional styles, and are normally not written.

Tools : The Four Treasures of the Study

The ink brush, ink, paper, and inkstone are essential implements of East Asian calligraphy: they are known together as the Four Treasures of the Study (T: 文房四寶 / S: 文房四宝) in China, and as the Four Friends of the Study (HG: 문방사우 / HJ: 文房四友) in Korea. In addition to these four tools, desk pads and paperweights are also used by calligraphers.

The brush is the traditional writing implement in East Asian calligraphy. The body of the brush can be made from either bamboo, or rarer materials such as red sandalwood, glass, ivory, silver, and gold. The head of the brush can be made from the hair (or feathers) of a wide variety of animals, including the weasel, rabbit, deer, chicken, duck, goat, pig, tiger, wolf, etc. There is also a tradition in both China and Japan of making a brush using the hair of a newborn, as a once-in-a-lifetime souvenir for the child. This practice is associated with the legend of an ancient Chinese scholar who scored first in the Imperial examinations by using such a personalized brush. Calligraphy brushes are widely considered an extension of the calligrapher's arm.

Today, calligraphy may also be done using a pen, but pen calligraphy does not enjoy the same prestige as traditional brush calligraphy.

Paper nowadays is frequently sold together with a paperweight and desk pad. 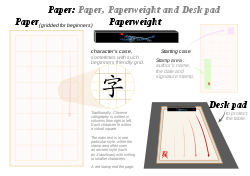 Special types of paper are used in East Asian calligraphy.

In China, Xuanzhi (宣紙), traditionally made in Anhui province, is the preferred type of paper. It is made from the Tartar wingceltis (Pteroceltis tartarianovii), as well as other materials including rice, the paper mulberry (Broussonetia papyrifera), bamboo, hemp, etc. In Japan, washi is made from the kozo (paper mulberry), ganpi (Wikstroemia sikokiana), and mitsumata (Edgeworthia papyrifera), as well as other materials such as bamboo, hemp, rice, and wheat.

Paperweights are used to hold down paper. A paperweight is often placed at the top of all but the largest pages to prevent slipping; for smaller pieces the left hand is also placed at the bottom of the page for support. Paperweights come in several types: some are oblong wooden blocks carved with calligraphic or pictorial designs; others are essentially small sculptures of people or animals. Like inkstones, paperweights are collectible works of art on their own right.

The desk pad (Chinese T: 畫氈, S: 画毡, Pinyin: huàzhān; Japanese: 下敷 shitajiki) is a pad made of felt. Some are printed with grids on both sides, so that when it is placed under the translucent paper, it can be used as a guide to ensure correct placement and size of characters. However, these printed pads are used only by students. Both desk pads and the printed grids come in a variety of sizes. 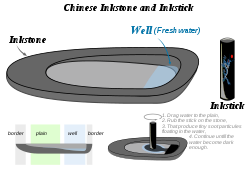 Scheme of Chinese Inkstone, Ink Stick, and technique to use them.

The ink is made from lampblack (soot) and binders, and comes in inksticks which must be rubbed with water on an inkstone until the right consistency is achieved. Much cheaper, pre-mixed bottled inks are now available, but these are used primarily for practice as stick inks are considered higher quality and chemical inks are more prone to bleeding over time, making them less suitable for use in hanging scrolls. Learning to rub the ink is an essential part of calligraphy study. Traditionally, East Asian calligraphy is written only in black ink, but modern calligraphers sometimes use other colours. Calligraphy teachers use a bright orange or red ink with which they write practice characters on which students trace, or to correct students' work.

A stone, ceramic, or clay from the banks of the Yellow River inkstone is used to grind the solid inkstick into liquid ink and to contain the ink once it is liquid. Chinese inkstones are highly prized as art objects and an extensive bibliography is dedicated to their history and appreciation, especially in China. 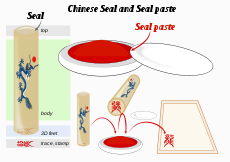 Scheme of Chinese Seal, Seal paste, and technique to use them.
Main article: Chinese seal

Calligraphic works are usually completed by the calligrapher putting his or her seal at the very end, in red ink. The seal serves the function of a signature.

The shape, size, stretch and type of hair in the brush, the color and density of the ink, as well as the absorptive speed and surface texture of the paper are the main physical parameters influencing the final result. The calligrapher also influences the result by the quantity of ink/water he lets the brush take up, then by the pressure, inclination, and direction he gives to the brush, producing thinner or bolder strokes, and smooth or toothed borders. Eventually, the speed, acceleration and deceleration of the writer's moves, turns, and crochets, and the stroke order give the "spirit" to the characters by influencing greatly their final shape.

Traditionally, the bulk of the study of calligraphy is composed of copying strictly exemplary works from the apprentice's master or from reputed calligraphers, thus learning them by rote. The master showing the 'right way' to draw items, which the apprentice have to copy strictly, continuously, until the move become instinctive and the copy perfect. Derivation from the model is seen as a failure.[1] Competency in a particular style often requires many years of practice. Correct strokes, stroke order, character structure, balance, and rhythm are essential in calligraphy. A student would also develop their skills in traditional Chinese arts, as familiarity and ability in the arts contributes to their calligraphy.

In Japan, smaller pieces of Japanese calligraphy are traditionally written while in seiza. In modern times, however, writers frequently practice calligraphy seated on a chair at a table. Larger pieces may be written while standing; in this case the paper is usually placed directly on the floor, but some calligraphers use an easel.

Basic calligraphy instruction is part of the regular school curriculum in both China and Japan and specialized programs of study exist at the higher education level in China, Korea, and Japan. In contemporary times, debate emerged on the limits of this copyist tradition within the modern art scenes, where innovation is the rule, while changing lifestyles, tools, and colors are also influencing new waves of masters.[1][10]

Chinese calligraphy is being promoted in Chinese schools to counter Character amnesia brought on by technology usage.[11]

Japanese calligraphy extends beyond Han characters to also include local scripts such as hiragana and katakana.

In the case of Korean calligraphy, the Hangeul and the existence of the circle required the creation of a new technique.[12]

The existence of temporary calligraphy is also to be noted. This is the practice of water-only calligraphy on the floor which dries out within minutes. This practice is especially appreciated by the new generation of retired Chinese in public parks of China.

The Calligraphy Model "Sunny after Snow" by Wang Xizhi