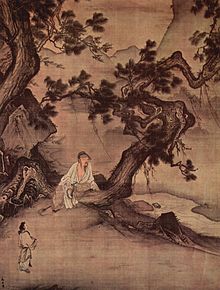 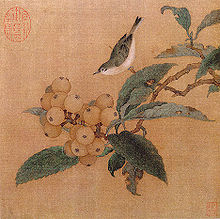 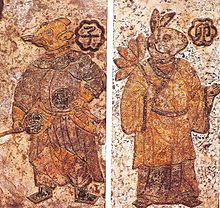 Chinese painting is one of the oldest continuous artistic traditions in the world. The earliest paintings were not representational but ornamental; they consisted of patterns or designs rather than pictures. Early pottery was painted with spirals, zigzags, dots, or animals. It was only during the Warring States Period (475-221 BC) that artists began to represent the world around them.

Painting in the traditional style is known today in Chinese as guó huà (国画), meaning 'national' or 'native painting', as opposed to Western styles of art which became popular in China in the 20th century. Traditional painting involves essentially the same techniques as calligraphy and is done with a brush dipped in black or colored ink; oils are not used. As with calligraphy, the most popular materials on which paintings are made of are paper and silk. The finished work can be mounted on scrolls, such as hanging scrolls or handscrolls. Traditional painting can also be done on album sheets, walls, lacquerware, folding screens, and other media.

The two main techniques in Chinese painting are:

Artists from the Han (202 BC) to the Tang (618–906) dynasties mainly painted the human figure. Much of what we know of early Chinese figure painting comes from burial sites, where paintings were preserved on silk banners, lacquered objects, and tomb walls. Many early tomb paintings were meant to protect the dead or help their souls get to paradise. Others illustrated the teachings of the Chinese philosopher Confucius, or showed scenes of daily life.

Many critics consider landscape to be the highest form of Chinese painting. The time from the Five Dynasties period to the Northern Song period (907–1127) is known as the "Great age of Chinese landscape". In the north, artists such as Jing Hao, Fan Kuan, and Guo Xi painted pictures of towering mountains, using strong black lines, ink wash, and sharp, dotted brushstrokes to suggest rough stone. In the south, Dong Yuan, Juran, and other artists painted the rolling hills and rivers of their native countryside in peaceful scenes done with softer, rubbed brushwork. These two kinds of scenes and techniques became the classical styles of Chinese landscape painting.

Chinese painting and calligraphy distinguishes themselves from other cultures' arts by their emphasis on motion, and charge with dynamic life.[1] The practice is traditionally first learned by rote. The master showing the 'right way' do draw items, which the apprentice have to copy strictly, continuously, until the move become instinctive. In contemporary times, debate emerged on the limits of this copyist tradition within the modern art scenes, where innovation is the rule, while changing lifestyles, tools, and colors are also influencing new waves of masters.[1][2]

In imperial times (beginning with the Eastern Jin Dynasty), painting and calligraphy in China were the most highly appreciated arts in court circles and were produced almost exclusively by amateurs—aristocrats and scholar-officials—who had the leisure time necessary to perfect the technique and sensibility necessary for great brushwork. Calligraphy was thought to be the highest and purest form of painting. The implements were the brush pen, made of animal hair, and black inks made from pine soot and animal glue. In ancient times, writing, as well as painting, was done on silk. However, after the invention of paper in the 1st century AD, silk was gradually replaced by the new and cheaper material. Original writings by famous calligraphers have been greatly valued throughout China's history and are mounted on scrolls and hung on walls in the same way that paintings are. 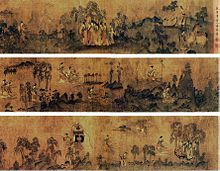 During the Six Dynasties period (220–589), people began to appreciate painting for its own beauty and to write about art. From this time we begin to know about individual artists, such as Gu Kaizhi. Even when these artists illustrated Confucian moral themes – such as the proper behavior of a wife to her husband or of children to their parents – they tried to make the figures graceful.

The "Six principles of Chinese painting" were established by Xie He, a writer, art historian and critic in 5th century China. He is most famous for his "Six points to consider when judging a painting" (绘画六法, Pinyin: Huìhuà Liùfǎ), taken from the preface to his book "The Record of the Classification of Old Painters" (古画品录; Pinyin: Gǔhuà Pǐnlù). Keep in mind that this was written circa 550 AD and refers to "old" and "ancient" practices. The six elements that define a painting are: 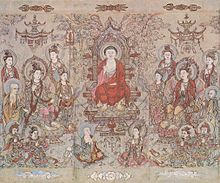 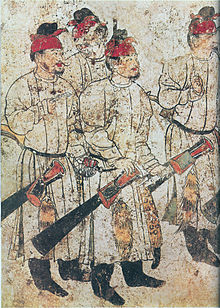 During the Tang Dynasty, figure painting flourished at the royal court. Artists such as Zhou Fang showed the splendor of court life in paintings of emperors, palace ladies, and imperial horses. Figure painting reached the height of elegant realism in the art of the court of Southern Tang (937-975).

Most of the Tang artists outlined figures with fine black lines and used brilliant color and elaborate detail. However, one Tang artist, the master Wu Daozi, used only black ink and freely painted brushstrokes to create ink paintings that were so exciting that crowds gathered to watch him work. From his time on, ink paintings were no longer thought to be preliminary sketches or outlines to be filled in with color. Instead they were valued as finished works of art.

Beginning in the Tang Dynasty, many paintings were landscapes, often shanshui (山水, "mountain water") paintings. In these landscapes, monochromatic and sparse (a style that is collectively called shuimohua), the purpose was not to reproduce exactly the appearance of nature (realism) but rather to grasp an emotion or atmosphere so as to catch the "rhythm" of nature.

Guo Xi, a representative painter of landscape painting in the Northern Song dynasty, has been well known for depicting mountains, rivers and forests in winter. This piece shows a scene of deep and serene mountain valley covered with snow and several old trees struggling to survive on precipitous cliffs. It is a masterpiece of Guo Xi by using light ink and magnificent composition to express his open and high artistic conception. 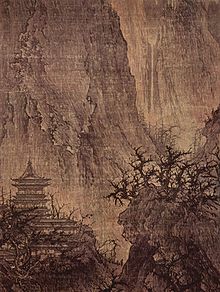 In the Song Dynasty period (960–1279), landscapes of more subtle expression appeared; immeasurable distances were conveyed through the use of blurred outlines, mountain contours disappearing into the mist, and impressionistic treatment of natural phenomena. Emphasis was placed on the spiritual qualities of the painting and on the ability of the artist to reveal the inner harmony of man and nature, as perceived according to Taoist and Buddhist concepts. One of the most famous artists of the period was Zhang Zeduan, painter of Along the River During the Qingming Festival. Yi Yuanji achieved a high degree of realism painting animals, in particular monkeys and gibbons.[3]

During the Southern Song period (1127–1279), court painters such as Ma Yuan and Xia Gui used strong black brushstrokes to sketch trees and rocks and pale washes to suggest misty space.

While many Chinese artists were attempting to represent three-dimensional objects and to master the illusion of space, another group of painters pursued very different goals. At the end of Northern Song period, the poet Su Shi and the scholar-officials in his circle became serious amateur painters. They created a new kind of art in which they used their skills in calligraphy (the art of beautiful writing) to make ink paintings. From their time onward, many painters strove to freely express their feelings and to capture the inner spirit of their subject instead of describing its outward appearance.

The "Four Generals of Zhongxing" painted by Liu Songnian during the Southern Song Dynasty. Yue Fei is the second person from the left. It is believed to be the "truest portrait of Yue in all extant materials."[4]

During the Mongol Yuan Dynasty (1271–1368), painters joined the arts of painting, poetry, and calligraphy by inscribing poems on their paintings. These three arts worked together to express the artist’s feelings more completely than one art could do alone. Yuan emperor Tugh Temur (r.1328,1329–1332) was very fond of Chinese painting and became a creditable painter himself.

Beginning in the 13th century, the tradition of painting simple subjects—a branch with fruit, a few flowers, or one or two horses—developed. Narrative painting, with a wider color range and a much busier composition than Song paintings, was immensely popular during the Ming period (1368–1644).

The first books illustrated with colored woodcuts appeared around this time; as color-printing techniques were perfected, illustrated manuals on the art of painting began to be published. Jieziyuan Huazhuan (Manual of the Mustard Seed Garden), a five-volume work first published in 1679, has been in use as a technical textbook for artists and students ever since.

Shen Zhou of the Wu School depicted the scene when the painter was making his farewell to Wu Kuan, a good friend of his, at Jingkou.

During the early Qing Dynasty (1644–1911), painters known as Individualists rebelled against many of the traditional rules of painting and found ways to express themselves more directly through free brushwork. In the 18th and 19th centuries, great commercial cities such as Yangzhou and Shanghai became art centers where wealthy merchant-patrons encouraged artists to produce bold new works.

In the late 19th and 20th centuries, Chinese painters were increasingly exposed to Western art. Some artists who studied in Europe rejected Chinese painting; others tried to combine the best of both traditions. Perhaps the most beloved modern painter was Qi Baishi, who began life as a poor peasant and became a great master. His best known works depict flowers and small animals.

In the early years of the People's Republic of China, artists were encouraged to employ socialist realism. Some Soviet Union socialist realism was imported without modification, and painters were assigned subjects and expected to mass-produce paintings. This regimen was considerably relaxed in 1953, and after the Hundred Flowers Campaign of 1956-57, traditional Chinese painting experienced a significant revival. Along with these developments in professional art circles, there was a proliferation of peasant art depicting everyday life in the rural areas on wall murals and in open-air painting exhibitions.

During the Cultural Revolution, art schools were closed, and publication of art journals and major art exhibitions ceased. Major destruction was also carried out as part of the elimination of Four Olds campaign.

Following the Cultural Revolution, art schools and professional organizations were reinstated. Exchanges were set up with groups of foreign artists, and Chinese artists began to experiment with new subjects and techniques. One particular case of freehand style (xieyi hua) may be noted in the work of the child prodigy Wang Yani -born 1975- who started painting at age 3 and has since considerably contributed to the exercise of the style in contemporary artwork.