Pinyin (Chinese: 拼音; pinyin: pīnyīn; [pʰín ín]) is the official system to transcribe Chinese characters into the Roman alphabet in China, Malaysia, Singapore and Taiwan.[1] It is also often used to teach Mandarin Chinese and spell Chinese names in foreign publications and used as an input method to enter Chinese characters (汉字 / 漢字, hànzì) into computers.

In Chinese language education, pinyin is the common name to refer to the system. The more official name Hanyu Pinyin (汉语拼音 / 漢語拼音) is sometimes used, where Hànyǔ means the spoken language of the Han (putonghua) and pinyin literally means "spelled sound" (phonetics).[7]

In the early 1930s, CCP leaders trained in Moscow introduced a phonetic alphabet using roman letters developed in the Soviet Oriental Institute of Leningrad. This Sin Wenz or "New Writing", from which the present pinyin system differs only slightly, was much more linguistically sophisticated than earlier alphabets, with the major exception that it did not indicate tones.

In 1940 several thousand members attended a Border Region Sin Wenz Society convention. Chairman Mao and General Zhu De, head of the army, both contributed their calligraphy (in characters) for the masthead of the Sin Wenz Society's new journal. Outside the CCP, other prominent supporters included Sun Yat-sen's son; Cai Yuanpei, the country's most prestigious educator; Tao Xingzhi, a leading educational reformer; and Lu Xun, China's best known writer. Over thirty journals soon appeared written in Sin Wenz, plus large numbers of translations, biographies (including Lincoln, Franklin, Edison, Ford, and Charlie Chaplin), some contemporary Chinese literature, and a spectrum of textbooks. In 1940, the movement reached an apex when Mao's Border Region Government declared that the Sin Wenz had the same legal status as traditional characters in government and public documents. Many educators and political leaders looked forward to the day when they would be universally accepted and completely replace characters. Opposition arose, however, because the system was less well adapted to writing regional languages, and therefore would require learning Mandarin. Sin Wenzi fell into relative disuse during the following years. [8]

Pinyin was championed by Zhou Youguang, often called "the father of Pinyin," as part of a Chinese government project in the 1950s.[9][10] Zhou was working in a New York bank when he decided to return to China to help rebuild the country after the establishment of the PRC in 1949. Believing he was helping Mao Zedong build a democracy,[11] Zhou became an economics professor in Shanghai. In 1954 China's Ministry of Education created a Committee for the Reform of the Chinese Written Language. Zhou was assigned the task of helping to develop a new romanization system.

Hanyu pinyin was based on several preexisting systems: (Gwoyeu Romatzyh of 1928, Latinxua Sin Wenz of 1931, and the diacritic markings from zhuyin).[12] "I’m not the father of pinyin," Zhou said years later. "I’m the son of pinyin. It’s [the result of] a long tradition from the later years of the Qing dynasty down to today. But we restudied the problem and revisited it and made it more perfect."[13]

A first draft was published on February 12, 1956. The first edition of Hanyu pinyin was approved and adopted at the Fifth Session of the 1st National People's Congress on February 11, 1958. It was then introduced to primary schools as a way to teach Standard Chinese pronunciation and used to improve the literacy rate among adults.[14]

Beginning in the early 1980s, in regards to people from Mainland China,[15] western publications began using the Hanyu Pinyin romanization system instead of earlier romanization systems; this resulted from the normalization of diplomatic relations between the United States and the PRC in 1979.[16] In 2001, the PRC Government issued the National Common Language Law, providing a legal basis for applying pinyin.[14]

Pinyin superseded older romanization systems such as Wade-Giles (1859; modified 1892) and Chinese Postal Map Romanization, and replaced zhuyin as the method of Chinese phonetic instruction in mainland China. The International Organization for Standardization (ISO) adopted pinyin as the standard romanization for modern Chinese in 1982 (ISO 7098:1982, superseded by ISO 7098:1991); the United Nations followed suit in 1986.[17] It has also been accepted by the government of Singapore, the United States' Library of Congress, the American Library Association, and many other international institutions.[18]

The spelling of Chinese geographical or personal names in pinyin has become the most common way to transcribe them in English. Pinyin has also become a useful tool for entering Chinese text into computers.

A school slogan asking elementary students to speak Putonghua is annotated with Pinyin, but without tonal marks.

Since 1958, Pinyin has been actively used in adult education as well, making it easier for formerly illiterate people to continue with self-study after a short period of Pinyin literacy instruction.[20]

Pinyin has become a tool for many foreigners to learn the Mandarin pronunciation, and is used to explain the grammar and spoken Mandarin together with hanzi. Books containing both Chinese characters and pinyin are often used by foreign learners of Chinese; pinyin's role in teaching pronunciation to foreigners and children is similar in some respects to furigana-based books (with hiragana letters written above or next to kanji) in Japanese or fully vocalised texts in Arabic ("vocalised Arabic").

The tone-marking diacritics are commonly omitted in popular news stories and even in scholarly works. An unfortunate effect of this is the increased ambiguity that results as to which Chinese characters are being represented. 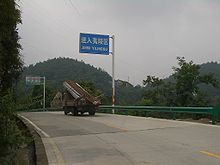 In Yiling, Yichang, Hubei, text on road signs appears both in Hanzi and in Pinyin

The correspondence between Roman letter and sound in the system is sometimes idiosyncratic, though not necessarily more so than the way the Roman alphabet is employed in other languages. For example, the aspiration distinction between b, d, g and p, t, k is similar to that of English (in which the two sets are however also differentiated by voicing), but not to that of French. Z and c also have that distinction; however, they are pronounced as [ts], as in German and Italian, which do not have that distinction. From s, z, c come the digraphs sh, zh, ch by analogy with English sh, ch. Although this introduces the novel combination zh, it is internally consistent in how the two series are related, and reminds the trained reader that many Chinese pronounce sh, zh, ch as s, z, c (and English-speakers use zh to represent /ʒ/ in foreign languages such as Russian anyway). In the x, j, q series, the Pinyin use of x is similar to its use in Portuguese, Galician, Catalan, Basque and Maltese; and the Pinyin q is akin to its value in Albanian; both Pinyin and Albanian pronunciations may sound similar to the ch to the untrained ear. Pinyin vowels are pronounced in a similar way to vowels in Romance languages. More information on the pronunciation of all pinyin letters in terms of English approximations is given further below.

The pronunciation and spelling of Chinese words are generally given in terms of initials and finals, which represent the segmental phonemic portion of the language, rather than letter by letter. Initials are initial consonants, while finals are all possible combinations of medials (semivowels coming before the vowel), the nucleus vowel, and coda (final vowel or consonant).

Even though most initials contain a consonant, finals are not always simple vowels, especially in compound finals (simplified Chinese: 复韵母; traditional Chinese: 複韻母; pinyin: fuyunmu), i.e., when a "medial" is placed in front of the final. For example, the medials [i] and [u] are pronounced with such tight openings at the beginning of a final that some native Chinese speakers (especially when singing or on stage) pronounce yī (Chinese: 衣; , clothes, officially pronounced /i/) as /ji/, wéi (simplified Chinese: 围; traditional Chinese: 圍, to enclose, officially as /uei/) as /wei/ or /wuei/. Often these medials are treated as separate from the finals rather than as part of them; this convention is followed in the chart of finals below.

In each cell below, the first line indicates the IPA, the second indicates pinyin. You can hear recordings of the Initials here

1 /ɻ/ may phonetically be [ʐ] (a voiced retroflex fricative). This pronunciation varies among different speakers, and is not two different phonemes.
2 the letters "w" and "y" are not included in the table of initials in the official pinyin system. They are an orthographic convention for the medials "i", "u" and "ü" when no initial is present. When "i", "u" or "ü" are finals and no initial is present, they are spelled "yi", "wu", and "yu", respectively.
3 "y" is pronounced [ɥ] (a labial-palatal approximant) before "u".

The conventional order (excluding w and y), derived from the zhuyin system, is:

The following chart gives the combinations of medials and finals based on an analysis that assumes just two vowel nuclei, /a/ and /ə/;[21] various allophones result depending on phonetic context.

The only syllable-final consonants in Standard Chinese are -n and -ng, and -r, which is attached as a grammatical suffix. A Chinese syllable ending with any other consonant either is from a non-Mandarin language (a southern Chinese language such as Cantonese, or a minority language of China), or indicates the use of a non-pinyin Romanization system (where final consonants may be used to indicate tones).

1 [ɑɻ] is written er. For other finals formed by the suffix -r, pinyin does not use special orthography; one simply appends -r to the final that it is added to, without regard for any sound changes that may take place along the way. For information on sound changes related to final -r, please see Standard Chinese.
2 "ü" is written as "u" after j, q, x, or y.
3 "uo" is written as "o" after b, p, m, or f.
4 "weng" is pronounced [ʊŋ] (written as "ong") when it follows an initial.

Technically, i, u, ü without a following vowel are finals, not medials, and therefore take the tone marks, but they are more concisely displayed as above. In addition, ê [ɛ] (欸, 誒) and syllabic nasals m (呒, 呣), n (嗯, 唔), ng (嗯,