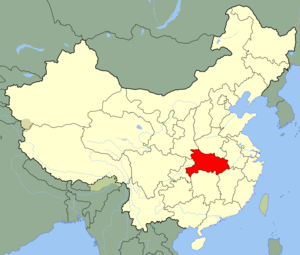 Audio|zh-Hubei.ogg|Hubei (zh-cpw |c=湖北 |p=Húběi |w=Hu-pei; Postal map spelling: "Hupeh") is a central province of the . Its abbreviation is 鄂 (: È), an ancient name associated with the eastern part of the province since the . The name "Hubei" means "north of the lake", referring to Hubei's position north of . [zh [http://www.people.com.cn/GB/shenghuo/1090/2435218.html Origin of the Names of China's Provinces] , .] The capital of Hubei is .

A popular unofficial name for Hubei is "Chu" (zh-cp |c=楚 |p=Chǔ), after the powerful that existed here during the .

By the (770 BC - 476 BC), Hubei was home to the powerful . Chu was nominally a tributary state of the , and it was itself an extension of the Chinese civilization that had emerged some centuries before in the north; but it was also culturally unique, and was a powerful state that held onto much of the middle and lower , with power extending northwards into the .

During the (475 BC - 221 BC) Chu became the major adversary of the upstart to the northwest (in what is now province), which began to assert itself by outward expansionism. As wars between Qin and Chu ensued, Chu lost more and more land: first its dominance over the , then (in 278 BC) its heartland, which correspond to modern Hubei. In 223 BC Qin chased down the remnants of the Chu regime, which had fled eastwards, as part of Qin's bid for the conquest of all China.

Qin founded the in 221 BC, the first unified state in China. Qin was succeeded by the in 206 BC, which established the province ("zhou") of Jingzhou in what is now Hubei and . Near the end of the in the beginning of the 3rd century, Jingzhou was ruled by regional warlord . After his death, Liu Biao's realm was surrendered by his successors to , a powerful warlord who had conquered nearly all of north China; but in the , warlords and drove Cao Cao out of Jingzhou. Liu Bei then took control of Jingzhou; he went on to conquer Yizhou (the ), but lost Jingzhou to Sun Quan; for the next few decades Jingzhou was controlled by the , ruled by Sun Quan and his successors.

The incursion of northern nomadic peoples into northern China at the beginning of the 4th century began nearly three centuries of the division of China into a nomad-ruled (but increasingly Sinicized) north and a -ruled south. Hubei, which is in southern China, remained under southern rule for this entire period, until the reunification of China by the in 589. In 617 the replaced Sui, and later on the Tang Dynasty placed what is now Hubei under several circuits: in the south; in the west, and in the east. After the disintegrated the 10th century, Hubei came under the control of several regional regimes: in the center, Wu (later ) to the east, and the to the north.

The reunified China in 982 and placed most of Hubei into , a longer version of Hubei's current name. s conquered China fully in 1279, and under their rule the province of was established, covering Hubei, , and parts of and . During the Mongol rule, in 1334, Hubei was devastated by the world's first recorded outbreak of the , which spread during the following three centuries to decimate populations throughout Eurasia. (Citation needed, as most authorities say Central Asia, some say India, and at least one says Africa).

The drove out the Mongols in 1368, and their version of Huguang province was smaller, and corresponded almost entirely to the modern provinces of Hubei and Hunan combined. The which had conquered China in 1644 split Huguang into the modern provinces of Hubei and Hunan in 1664. The Qing Dynasty continued to maintain a of Huguang, however; one of the most famous was , whose modernizing reforms made Hubei (especially ) into a prosperous center of commerce and industry. The / area, south-east of Wuhan, became an important center of mining and metallurgy.

In 1911 the took place in modern-day , overthrowing the and establishing the . In 1927 Wuhan became the seat of a government established by left-wing elements of the , led by ; this government was later merged into 's government in . During the eastern parts of Hubei were conquered and occupied by while the western parts remained under Chinese control.

During the in the 1960s, Wuhan saw fighting between rival "Red Guard" factions.

As the fears of a nuclear war increased during the time of s in the late 1969s, the prefecture of Hubei was chosen as the site of Project 131, an underground military command headquarters.

The province - and Wuhan in particular - suffered severely from the . Large scale dam construction followed, with the on the near started in 1970 and completed in 1988; the construction of the , further upstream, began in 1993. In the following years, authorities resettled millions of people from western Hubei to make way for the construction of the dam. A number of smaller dams have been constructed on the Yangtze's tributaries as well.

The enters Hubei from the west via the ; the Hanshui and enter from the north. is a tributary of the Yangtze River which has also been degraded by the Three Gorges Dam project. The Yangtze and Hanshui rivers meet at Wuhan, the provincial capital. Thousands of lakes dot the landscape, giving Hubei the name of: "Province of Lakes"; the largest of these lakes are and . The lies on the border between Hubei and .

Hubei has a with distinct seasons. Hubei has average temperatures of 1 - 6 °C in winter and of 24 - 30 °C in summer; punishing temperatures of 40 °C or above are famously associated with , the provincial capital.

Important cities are , , and .

Hubei is often called the "Land of Fish and Rice" ( _zh. 鱼米之乡). Important agricultural products in Hubei include , , , and , while industries include , metallurgy, machinery, power generation, textiles, foodstuffs and high-tech commodities.

resources that can be found in Hubei in significant quantities include , , , , , , , , , , , amalgam, and . The province's recoverable reserves of stand at 548 million tons, which is modest compared to other Chinese provinces. Hubei is also well known for its mines of fine turquoise and green faustite.

Once completed, the in western Hubei will provide plentiful , with an estimated annual power production of 84,700 Gwh. Existing hydroelectric stations include , , , , , , , and .

form the dominant ethnic group in Hubei. A considerable Miao and population live in the southwestern part of the province, especially in .

Perhaps the most celebrated element of is the , a freshwater that is commonly steamed.

Types of traditional popular in Hubei include and .

The area is the alleged home of the "", a wild undiscovered hominid that lives in the forested hills.

The people of Hubei are given the uncomplimentary nickname "Nine Headed Birds" by other Chinese, from a mythological creature said to be very aggressive and hard to kill. "In the sky live nine-headed birds. On the earth live wise Hubei people."

is one of the major culture centers in China.

The premier (founded in 1893) and many other institutions in Wuhan makes it a hub of higher education and research in China.

Hubei plays an important role in China's transportation industry. Situated on the Yangtze and Rivers, which are important waterways, Hubei also enjoys the convenience of railways linking to , Beijing to , to Wuhan, Wuhan to , and to , and of the airports in Wuhan, Yichang, Sanxia, Xiangfan and Shashi. National and provincial highways also contribute to Hubei's economic development.

Hubei is home to the ancient , a local state during the that developed its own unique culture. Chu culture mixed with other influences, ancient and modern, endows Hubei richly with tourist resources. Famous attractions include:
* City
*
*
*
* in
* The in Wuhan, with extensive archeological and cultural exhibits and performance presentations of ancient music and dance.

In 1994, the ancient building complex of the Wudang Mountains was listed by as a .

Professional sports teams in Hubei include:
*
**

In 2005, Hubei province signed a twinning agreement with county of Norway. A "Norway-Hubei Week" was held in 2007. [www.norway-hubei.net]