Ducks are sometimes confused with several types of unrelated water birds with similar forms, such as loons or divers, grebes, gallinules, and coots. 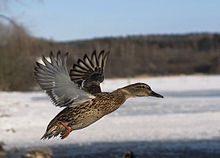 The word duck comes from Old English *dūce "diver", a derivative of the verb *dūcan "to duck, bend down low as if to get under something, or dive", because of the way many species in the dabbling duck group feed by upending; compare with Dutch duiken and German tauchen "to dive".

Some people use "duck" specifically for adult females and "drake" for adult males, for the species described here; others use "hen" and "drake", respectively.

A duckling is a young duck in downy plumage[1] or baby duck;[2] but in the food trade young adult ducks ready for roasting are sometimes labelled "duckling".[citation needed] 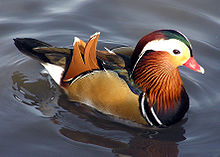 The overall body plan of ducks is elongated and broad, and the ducks are also relatively long-necked, albeit not as long-necked as the geese and swans. The body shape of diving ducks varies somewhat from this in being more rounded. The bill is usually broad and contains serrated lamellae which are particularly well defined in the filter-feeding species. In the case of some fishing species the bill is long and strongly serrated. The scaled legs are strong and well developed, and generally set far back on the body, more so in the highly aquatic species. The wings are very strong and are generally short and pointed, and the flight of ducks requires fast continuous strokes, requiring in turn strong wing muscles. Three species of steamer duck are almost flightless, however. Many species of duck are temporarily flightless while moulting; they seek out protected habitat with good food supplies during this period. This moult typically precedes migration.

The drakes of northern species often have extravagant plumage, but that is moulted in summer to give a more female-like appearance, the "eclipse" plumage. Southern resident species typically show less sexual dimorphism, although there are exceptions like the Paradise Shelduck of New Zealand which is both strikingly sexually dimorphic and where the female's plumage is brighter than that of the male. The plumage of juvenile birds generally resembles that of the female.

Pecten along the beak

Diving ducks and sea ducks forage deep underwater. To be able to submerge more easily, the diving ducks are heavier than dabbling ducks, and therefore have more difficulty taking off to fly.

A few specialized species such as the mergansers are adapted to catch and swallow large fish.

The others have the characteristic wide flat beak designed for dredging-type jobs such as pulling up waterweed, pulling worms and small molluscs out of mud, searching for insect larvae, and bulk jobs such as dredging out, holding, turning headfirst, and swallowing a squirming frog. To avoid injury when digging into sediment it has no cere. but the nostrils come out through hard horn.

The ducks are generally monogamous, although these bonds generally last a single year only. Larger species and the more sedentary species (like fast river specialists) tend to have pair-bonds that last numerous years. Most duck species breed once a year, choosing to do so in favourable conditions (spring/summer or wet seasons). Ducks also tend to make a nest before breeding. Although mother ducks are very caring and protective of their young, they are not above abandoning some of their ducklings if they are physically stuck in an area they cannot get out of or are not prospering due to genetic defects or sickness brought about by hypothermia, starvation, or disease. Ducklings can also be orphaned by inconsistent, late hatching where a few eggs hatch long after the mother has abandoned the nest.

Despite widespread misconceptions, only the females of most dabbling ducks "quack". For example, the scaup – which are diving ducks – make a noise like "scaup" (hence their name), and even among the dabbling ducks, the males never quack. In general, ducks make a wide range of calls, ranging from whistles, cooing, yodels and grunts. Calls may be loud displaying calls or quieter contact calls.

A common urban legend claims that duck quacks do not echo; however, this has been shown to be false. This myth was first debunked by the Acoustics Research Centre at the University of Salford in 2003 as part of the British Association's Festival of Science.[5] It was also debunked in one of the earlier episodes of the popular Discovery Channel television show MythBusters.[6] 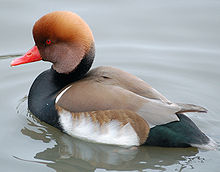 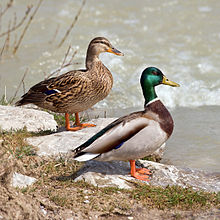 Two Mallard ducks, a female (top) and a male (bottom).

The ducks have a cosmopolitan distribution occurring across most of the world except for Antarctica. A number of species manage to live on sub-Antarctic islands like South Georgia and the Auckland Islands. Numerous ducks have managed to establish themselves on oceanic islands such as Hawaii, New Zealand and Kerguelen, although many of these species and populations are threatened or have become extinct. 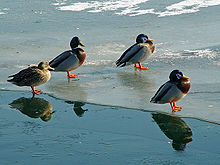 Some duck species, mainly those breeding in the temperate and Arctic Northern Hemisphere, are migratory; those in the tropics, however, are generally not. Some ducks, particularly in Australia where rainfall is patchy and erratic, are nomadic, seeking out the temporary lakes and pools that form after localised heavy rain.[citation needed]

Ducks have become an accepted presence in populated areas. Migration patterns have changed such that many species remain in an area during the winter months. In spring and early summer ducks sometimes influence human activity through their nesting; sometimes a duck pair nests well away from water, needing a long trek to water for the hatchlings: this sometimes causes an urgent wildlife rescue operation (e.g. by the RSPCA) if the duck nested somewhere unsuitable like in a small enclosed courtyard.

Worldwide, ducks have many predators. Ducklings are particularly vulnerable, since their inability to fly makes them easy prey not only for predatory birds but also large fish like pike, crocodilians, and other aquatic hunters, including fish-eating birds such as herons. Ducks' nests are raided by land-based predators, and brooding females may be caught unaware on the nest by mammals such as foxes, or large birds, such as hawks or eagles.

Adult ducks are fast fliers, but may be caught on the water by large aquatic predators including big fish such as the North American muskie and the European pike. In flight, ducks are safe from all but a few predators such as humans and the Peregrine Falcon, which regularly uses its speed and strength to catch ducks.

Ducks have many economic uses, being farmed for their meat, eggs, feathers, (particularly their down). They are also kept and bred by aviculturists and often displayed in zoos. All domestic ducks are descended from the wild Mallard Anas platyrhynchos, except the Muscovy Duck.[7] Many domestic breeds have become much larger than their wild ancestor, with a "hull length" (from base of neck to base of tail) of 30 cm (12 inches) or more and routinely able to swallow an adult British Common Frog Rana temporaria whole; the wild mallard's "hull length" is about 6 inches.

FAO reports that China is the top duck market in 2004 followed by Vietnam and other South East Asian countries.

In many areas, wild ducks of various species (including ducks farmed and released into the wild) are hunted for food or sport, by shooting, or formerly by decoys. Because an idle floating duck or a duck squatting on land cannot react to fly or move quickly, "a sitting duck" has come to mean "an easy target".

Wild ducks of many species and domesticated breeds are widely consumed around the world.

Ducks as pets are fairly uncommon due to the cost and demands of raising and caring for them and whether local animal control laws permit or forbid the public selling and private ownership of ducks, ducklings, and fertilized duck eggs. Ducks are usually kept outdoors or inside a cage since it is unsuitable to let them roam freely indoors due to the risk of eating carpet fibers, which can be a health hazard to them, and their lack of sphincter muscles which would require carpet-less flooring and frequent cleaning up after them. 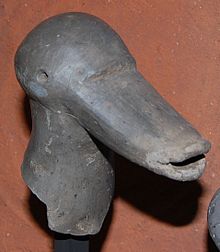 Roman spout in shape of a duck's head, found at Derby racecourse and now at Derby Museum and Art Gallery.

In 2002, psychologist Richard Wiseman and colleagues at the University of Hertfordshire, UK, finished a year-long LaughLab experiment, concluding that of all animals, ducks attract the most humor and silliness; he said, "If you're going to tell a joke involving an animal, make it a duck."[8] The word "duck" may have become an inherently funny word in many languages, possibly because ducks are seen as silly in their looks or behavior. Of the many ducks in fiction, many are cartoon characters, such as Walt Disney's Donald Duck, and Warner Bros.' Daffy Duck.

A male and female Wood Duck