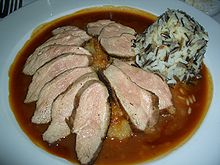 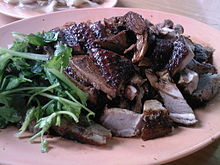 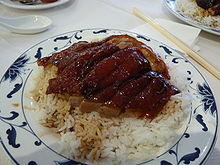 Duck refers to the meat of several species of bird in the Anatidae family, found in both fresh and salt water. Duck is eaten in many cuisines around the world.

The most common duck meat consumed in the United States is the Pekin duck. Because most commercially raised Pekins come from Long Island, New York, Pekins are also sometimes called "Long Island" ducks, despite being of Chinese origin. Some specialty breeds have become more popular in recent years, notably the Muscovy duck, and the Moulard duck (a sterile hybrid of Pekins and Muscovies).[1] Unlike most other domesticated ducks, Muscovy ducks are not descended from mallards.

According to the USDA, nearly 26 million ducks were eaten in the U.S. in 2004.[citation needed]

Duck meat is derived primarily from the breasts and legs of ducks. The meat of the legs is darker and somewhat fattier than the meat of the breasts, although the breast meat is darker than the breast meat of a chicken or a turkey. Being waterfowl, ducks have a layer of heat-insulating subcutaneous fat between the skin and the meat. De-boned duck breast can be grilled like steak, usually leaving the skin and fat on. Magret refers specifically to the breast of a mallard or Barbary duck that has been force fed to produce foie gras.[2]

Internal organs such as heart and kidneys may also be eaten; the liver in particular is often used as a substitute for goose liver in foie gras.

Duck is used in a variety of dishes around the world, most of which involve roasting for at least part of the cooking process to aid in crisping the skin. Notable duck dishes include: