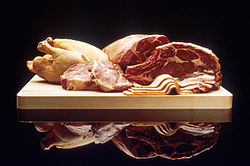 In many societies, controversy and debate have arisen over the ethics of eating animals. Ethical objections are generally divided into opposition to the act of killing in general, and opposition to certain agricultural practices surrounding the production of meat. Reasons for objecting to the practice of killing animals for consumption may include animal rights, environmental ethics, and/or religious reasons. Some people, while not vegetarians, refuse to eat the flesh of certain animals due to cultural taboo, such as cats, dogs, horses, or rabbits. Others support meat eating for scientific, nutritional and cultural reasons, including religious ones. Some meat eaters abstain from the meat of animals reared in particular ways, such as factory farms, or avoid certain meats, such as veal or foie gras. Some people follow vegetarian or vegan diets not because of moral concerns involving the production of meat and other animal products in general, but the treatment involving the raising and slaughter of animals.

Ethics of killing for food

Princeton University professor and pioneer of the animal liberation movement, Peter Singer, believes that if alternative means of survival exist, one ought to choose the option that does not cause unnecessary harm to animals. Most ethical vegetarians argue that the same reasons exist against killing animals to eat as against killing humans to eat. Singer, in his book Animal Liberation listed possible qualities of sentience in non-human creatures that gave such creatures the scope to be considered under utilitarian ethics, and this has been widely referenced by animal rights campaigners and vegetarians. Ethical vegetarians also believe that killing an animal, like killing a human, can only be justified in extreme circumstances and that consuming a living creature for its enjoyable taste, convenience, or nutritional value is not sufficient cause. Another common view is that humans are morally conscious of their behavior in a way other animals are not, and therefore subject to higher standards.[1]

This same argument is used by others to counter the treatment of animals as moral equals with humans. Equality in a moral community requires the capability of all participants to make moral decisions. Animals are incapable of making ethical choices; for example, a tiger would not refrain from eating a human because it was wrong, it would decide whether to attack based on what it felt would allow it to survive.

Thus, some opponents of ethical vegetarianism describe the comparison of eating livestock with killing people to be fallacious. Humans are capable of culture, innovation and the sublimation of instinct in order to act in an ethical manner. Animals are not, and so are by definition unequal to humans on a moral level. This does not excuse cruelty, but it does mean animals are not morally equivalent to humans and do not possess the rights a human has.[2] For example, killing a mouse is not the moral equivalent of committing homicide.

...in my first voyage from Boston...our people set about catching cod, and hauled up a great many. Hitherto I had stuck to my resolution of not eating animal food... But I had formerly been a great lover of fish, and, when this came hot out of the frying-pan, it smelt admirably well. I balanc'd some time between principle and inclination, till I recollected that, when the fish were opened, I saw smaller fish taken out of their stomachs; then thought I, 'If you eat one another, I don't see why we mayn't eat you.' So I din'd upon cod very heartily, and continued to eat with other people, returning only now and then occasionally to a vegetable diet. So convenient a thing it is to be a reasonable creature, since it enables one to find or make a reason for everything one has a mind to do.[3]

Ethical vegetarianism has become popular in developed countries particularly because of the spread of factory farming, faster communications, and environmental consciousness. Some believe that the current mass demand for meat cannot be satisfied without a mass-production system that disregards the welfare of animals, while others believe that practices like well-managed free-ranging and consumption of game, particularly from species whose natural predators have been significantly eliminated, could substantially alleviate the demand for mass-produced meat.[citation needed]

Various programs operate in the U.S. that promote the notion that animals raised for food are treated humanely, but Farm Sanctuary believes that commodifying and slaughtering animals is incompatible with the definition of "humane," which according to the Webster's Dictionary, means "characterized by kindness, mercy or compassion".[4]

Defenders of factory farming argue that the animals are better off in total confinement. According to F J "Sonny" Faison, president of Carroll’s Foods:

They're in state-of-the-art confinement facilities. The conditions that we keep these animals in are much more humane than when they were out in the field. Today they're in housing that is environmentally controlled in many respects. And the feed is right there for them all the time, and water, fresh water. They're looked after in some of the best conditions, because the healthier and [more] content that animal, the better it grows. So we're very interested in their well-being up to an extent.[5]

A Holstein cow – one of the estimated 1.3 billion cattle worldwide frequently used for food and milk.[6]

Eugene Linden, author of The Parrot's Lament suggests there are many examples of animal behavior and intelligence that surpass what people would suppose to be the boundary of animal consciousness. Linden contends that in many of these documented examples, a variety of animal species exhibits behavior that can only be attributed to emotion, and to a level of consciousness that we would normally ascribe only to our own species.

Consciousness requires a certain kind of informational organization that does not seem to be 'hard-wired' in humans, but is instilled by human culture. Moreover, consciousness is not a black-or-white, all-or-nothing type of phenomenon, as is often assumed. The differences between humans and other species are so great that speculations about animal consciousness seem ungrounded. Many authors simply assume that an animal like a bat has a point of view, but there seems to be little interest in exploring the details involved.[7]

This position is further developed with the argument that sentience (being aware of one's surroundings) does not equate to consciousness (being aware of oneself as an individual). Generally only the handful of animals that have passed the mirror test are considered to be conscious.

Peter Singer maintains that many livestock animals are of sufficient sentience to deserve better treatment than they often receive (this, according to his ethical philosophy: personism).

A related argument revolves around non-human organisms' ability to feel pain. If animals can be shown to suffer in a way similar or identical to humans, many of the arguments against human suffering could then, presumably, be extended to animals. Others have argued that pain can be demonstrated by averse reactions to negative stimuli that are non-purposeful or even maladaptive.[8] One such reaction is transmarginal inhibition, a phenomenon observed in humans and some animals akin to mental breakdown.

As noted by John Webster, a professor of animal husbandry at Bristol:

People have assumed that intelligence is linked to the ability to suffer and that because animals have smaller brains they suffer less than humans. That is a pathetic piece of logic, sentient animals have the capacity to experience pleasure and are motivated to seek it, you only have to watch how cows and lambs both seek and enjoy pleasure when they lie with their heads raised to the sun on a perfect English summer's day. Just like humans.[9]

Detractors have advanced a slippery slope counterargument. On a cellular level, cooking a plant subjects its cells to a violent death, while eating a plant raw still leads to corrosive chemical attack on the cells by the stomach's gastric acid. Although a plant does not possess a nervous system, its cells are still living organisms that respond to external stimuli. Taken to the extremes this implies that eating anything that has not already died a natural death is unethical.[citation needed]

The main response to the slippery slope argument is to draw a line somewhere among the organisms. It is debatable where exactly this line should be drawn. Justin Leiber, a philosophy professor at Oxford University writes that:

Montaigne is ecumenical in this respect, claiming consciousness for spiders and ants, and even writing of our duties to trees and plants. Singer and Clarke agree in denying consciousness to sponges. Singer locates the distinction somewhere between the shrimp and the oyster. He, with rather considerable convenience for one who is thundering hard accusations at others, slides by the case of insects and spiders and bacteria, they pace Montaigne, apparently and rather conveniently do not feel pain. The intrepid Midgley, on the other hand, seems willing to speculate about the subjective experience of tapeworms ...Nagel ... appears to draw the line at flounders and wasps, though more recently he speaks of the inner life of cockroaches.[10]

Some people choose to follow a vegetarian or vegan lifestyle for environmental reasons. 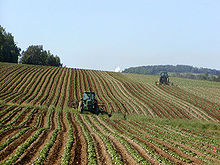 The use of large industrial monoculture that is common in industrialized agriculture, typically for feed crops such as corn and soy is more damaging to ecosystems than more sustainable farming practices such as organic farming, permaculture, arable, pastoral, and rain-fed agriculture. Other concerns include the wasting of natural resources, such as food, water, etc. 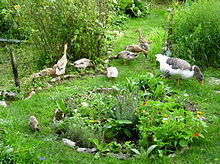 Permaculture is an approach to designing human settlements and agricultural systems that are modeled on the relationships found in natural ecologies.

Animals that feed on grain or rely on grazing require more water than grain crops.[11] According to the USDA, growing crops for farm animals requires nearly half of the U.S. water supply and 80% of its agricultural land. Animals raised for food in the U.S. consume 90% of the soy crop, 80% of the corn crop, and 70% of its grain.[12] In tracking food animal production from the feed through to the dinner table, the inefficiencies of meat, milk and egg production range from a 4:1 energy input to protein output ratio up to 54:1.[13] The result is that producing animal-based food is typically much less efficient than the harvesting of grains, vegetables, legumes, seeds and fruits, though this might not be true to the same extent for animal husbandry in the developing world where factory farming is almost non existent, making animal-based food much more sustainable.

Defenders of anthropocentrist views maintain that a healthy, sustainable environment is necessary for human well-being rather than for its own sake.

Steven Davis, a professor of animal science at Oregon State University, argues that the least harm principle does not require giving up all meat. Davis states that a diet containing beef from grass-fed ruminants such as cattle would kill fewer animals than a vegetarian diet particularly when one takes into account animals killed by agriculture.[14] This conclusion has been criticized as flawed because it calculates the number of animals killed per acre (instead of per consumer). When his numbers are changed, Davis' argument ends up showing veganism as perpetrating the least harm.[15] Additionally, his argument has been criticized for being based on only two studies that may not represent commercial agricultural practices. Larger number of studies again show veganism to do the "least harm".[16]