True crabs are decapod crustaceans of the infraorder Brachyura, which typically have a very short projecting "tail" (Greek: βραχύς / brachys = short,[2] οὐρά / οura = tail[3]), or where the reduced abdomen is entirely hidden under the thorax. Many other animals with similar names – such as hermit crabs, king crabs, porcelain crabs, horseshoe crabs and crab lice – are not true crabs. 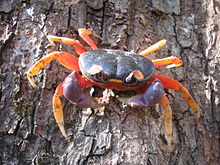 Gecarcinus quadratus, a land crab from Central and South America

Crabs are generally covered with a thick exoskeleton, and armed with a single pair of chelae (claws). Crabs are found in all of the world's oceans, while many crabs live in fresh water and on land, particularly in tropical regions. Crabs vary in size from the pea crab, a few millimetres wide, to the Japanese spider crab, with a leg span of up to 4 metres (13 ft).[4]

About 850 species of crab are freshwater, terrestrial or semi-terrestrial species;[5] they are found throughout the world's tropical and semi-tropical regions. They were previously thought to be a monophyletic group, but are now believed to represent at least two distinct lineages, one in the Old World and one in the New World.[6]

The earliest unambiguous crab fossils date from the Jurassic,[7] although Carboniferous Imocaris, known only from its carapace, may be a primitive crab.[8] The radiation of crabs in the Cretaceous and afterward may be linked either to the break-up of Gondwana or to the concurrent radiation of bony fish, crabs' main predators.[9] 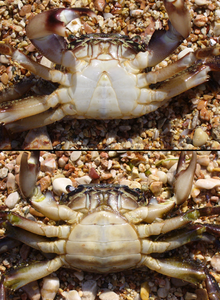 The underside of a male (top) and a female (bottom) individual of Pachygrapsus marmoratus, showing the difference in shape of the abdomen

Crabs often show marked sexual dimorphism. Males often have larger claws,[10] a tendency which is particularly pronounced in the fiddler crabs of the genus Uca (Ocypodidae). In fiddler crabs, males have one claw which is greatly enlarged and which is used for communication, particularly for attracting a mate.[11] Another conspicuous difference is the form of the pleon (abdomen); in most male crabs, this is narrow and triangular in form, while females have a broader, rounded abdomen.[12] This is due to the fact that female crabs brood fertilised eggs on their pleopods. 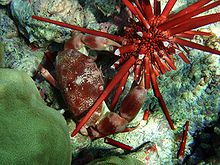 Crabs typically walk sideways[13] (a behaviour which gives us the word crabwise). This is because of the articulation of the legs which makes a sidelong gait more efficient.[14] However, some crabs walk forwards or backwards, including raninids,[15] Libinia emarginata[16] and Mictyris platycheles.[13] Some crabs, notably the Portunidae and Matutidae, are also capable of swimming.[17]

Crabs are mostly active animals with complex behaviour patterns. They can communicate by drumming or waving their pincers. Crabs tend to be aggressive towards one another and males often fight to gain access to females.[18] On rocky seashores, where nearly all caves and crevices are occupied, crabs may also fight over hiding holes.[19]

Crabs are omnivores, feeding primarily on algae,[20] and taking any other food, including molluscs, worms, other crustaceans, fungi, bacteria and detritus, depending on their availability and the crab species. For many crabs, a mixed diet of plant and animal matter results in the fastest growth and greatest fitness.[21][22]

Crabs are known to work together to provide food and protection for their family, and during mating season to find a comfortable spot for the female to release her eggs.[23]

Crabs make up 20% of all marine crustaceans caught, farmed, and consumed worldwide, amounting to 1½ million tonnes annually. One species, Portunus trituberculatus, accounts for one fifth of that total. Other commercially important taxa include Portunus pelagicus, several species in the genus Chionoecetes, the blue crab (Callinectes sapidus), Charybdis spp., Cancer pagurus, the Dungeness crab (Metacarcinus magister) and Scylla serrata, each of which yields more than 20,000 tonnes annually.[24] 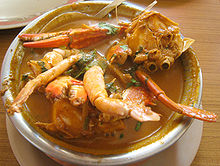 Crabs are prepared and eaten as a dish in several different ways all over the world. Some species are eaten whole, including the shell, such as soft-shell crab; with other species just the claws and/or legs are eaten. The latter is particularly common for larger crabs, such as the snow crab. Mostly in East Asian cultures, the roe of the female crab is also eaten, which usually appears orange or yellow in color in fertile crabs.

In some regions spices improve the culinary experience. In Asia, masala crab and chilli crab are examples of heavily spiced dishes. In the Chesapeake Bay region, blue crab is often eaten with Old Bay Seasoning.

For the British dish Cromer crab, the crab meat is extracted and placed inside the hard shell. One American way to prepare crab meat is by extracting it and adding a flour mix, creating a crab cake.

Crabs are also used in bisque, a global dish of French origin.

The infraorder Brachyura contains 6,793 species in 93 families,[17] as many as the remainder of the Decapoda.[28] The evolution of crabs is characterised by an increasingly robust body, and a reduction in the abdomen. Although many other groups have undergone similar processes, carcinisation is most advanced in crabs. The telson is no longer functional in crabs, and the uropods are absent, having probably evolved into small devices for holding the reduced abdomen tight against the sternum.

In most decapods, the gonopores (sexual openings) are found on the legs. However, since crabs use the first two pairs of pleopods (abdominal appendages) for sperm transfer, this arrangement has changed. As the male abdomen evolved into a narrower shape, the gonopores have moved towards the midline, away from the legs, and onto the sternum.[29] A similar change occurred, independently, with the female gonopores. The movement of the female gonopore to the sternum defines the clade Eubrachyura, and the later change in the position of the male gonopore defines the Thoracotremata. It is still a subject of debate whether those crabs where the female, but not male, gonopores are situated on the sternum, form a monophyletic group.[28] 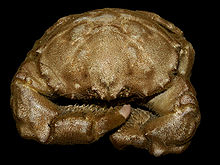 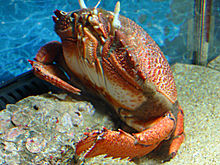 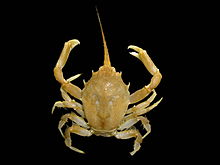 Numbers of extant and extinct (†) species are given in brackets.[17] The superfamily Eocarcinoidea, containing Eocarcinus and Platykotta, was formerly thought to contain the oldest crabs; it is now considered part of the Anomura.[30]

Both the constellation Cancer and the astrological sign Cancer are named after the crab, and depicted as a crab. William Parsons, 3rd Earl of Rosse drew the Crab Nebula in 1848 and noticed its similarity to the animal; the Crab pulsar lies at the centre of the nebula.[31]

The Moche people of ancient Peru worshipped nature, especially the sea,[32] and often depicted crabs in their art.[33] In Greek mythology, Karkinos was a crab that came to the aid of the Lernaean Hydra as it battled Heracles.