The Common carp (Cyprinus carpio) is a widespread freshwater fish of eutrophic waters in lakes and large rivers in Europe and Asia.[2][3] The wild populations are considered vulnerable to extinction, but the species has also been domesticated and introduced into environments worldwide, and is often considered an invasive species.[2] It gives its name to the carp family: Cyprinidae.

There are two or three subspecies:

It is related to the common goldfish (Carassius auratus), with which it is capable of interbreeding.[7][8]

The common carp is a fish native to Asia which has been introduced to every part of the world with the exception of Eastern Europe, The Middle East and the poles. The original common carp was that found in the inland delta of the Danube river about 2000 years ago, and was torpedo-shaped and golden-yellow in colour. It had two pairs of barbels and a mesh-like scale pattern. Although this fish was initially kept as an exploited captive, it was later maintained in large, specially built ponds by the Romans in south-central Europe (verified by the discovery of common carp remains in excavated settlements in the Danube delta area). As aquaculture became a profitable branch of agriculture, efforts were made to farm the animals, and the culture systems soon included spawning and growing ponds.[9] The common carp's native range also extends to the Black Sea, Caspian Sea and Aral Sea.

Both European and Asian subspecies have been domesticated.[4] In Europe, domestication of carp as food fish was spread by monks between the 13th and 16th centuries. The wild forms of carp had reached the delta of the Rhine in the twelfth century already, probably also with some human help.[10] Variants that have arisen with domestication include the mirror carp, with large mirror-like scales (linear mirror – scaleless except for a row of large scales that run along the lateral line; originating in Germany), the leather carp (virtually unscaled except near dorsal fin), and the fully scaled carp. Koi carp (錦鯉 (nishikigoi) in Japanese, 鯉魚 (pinyin: lĭ yú) in Chinese) is a domesticated ornamental variety that originated in the Niigata region of Japan in the 1820s.[11] They also invaded the Great Lakes in 1896 when the area near Newmarket flooded and allowed them to escape into the Holland River.

Wild common carp are typically slimmer than domesticated forms, with body length about four times body height (range, 3.2–4.8 times).[2] and can grow to a maximum length of 120 centimetres (47 in), a maximum weight of over 40 kilograms (88 lb),[2] and an oldest recorded age of at least 65 years.[12] The largest recorded carp, caught by an angler in January 2010 at Lac de curtons (Rainbow Lake) near Bordeaux, France, weighed 42.6 kilograms (94 lb).[13] The wild, non-domesticated forms tend to be much less stocky at around 20%–33% the maximum size.

Although they are very tolerant of most conditions, common carp prefer large bodies of slow or standing water and soft, vegetative sediments. A schooling fish, they prefer to be in groups of 5 or more. They naturally live in a temperate climate in fresh or slightly brackish water with a pH of 6.5–9.0 and salinity up to about 5‰,[14] and temperatures of 3 to 35 °C.[2] The ideal temperature is 23 to 30 °C, with spawning beginning at 17–18 °C; they will readily survive winter in a frozen over pond, as long as some free water remains below the ice.[14] Carp are able to tolerate water with very low oxygen levels, by gulping air at the surface.[3]

Common carp are omnivorous. They can eat a vegetarian diet of water plants, but prefer to scavenge the bottom for insects, crustaceans (including zooplankton),crawfish, and benthic worms.

An egg-layer, a typical adult fish can lay 300,000 eggs in a single spawning.[15] Although carp typically spawn in the spring, in response to rising water temperatures and rain fall, carp can spawn multiple times in a season. In commercial operations spawning is often stimulated using a process called hypophysation where lyophilized pituitary extract is injected into the fish. The pituitary extract contains gonadotropic hormones which stimulate gonad maturation and sex steroid production, ultimately promoting reproduction.

A single carp can lay over a million eggs in a year,[3] yet their population remains the same, so the eggs and young perish in similar vast numbers. Eggs and fry often fall victim to bacteria, fungi, and the vast array of tiny predators in the pond environment. Carp which survive to juvenile are preyed upon by other fish such as the northern pike and largemouth bass, and a number of birds (including cormorants, herons, goosander, and osprey)[16] and mammals (including otter and mink). Once they reach adulthood there are no other fish that can eat them outside their native range.

Introduction into other habitats 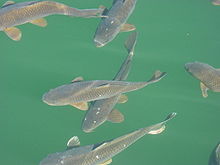 Carp gather near a dock in Lake Powell 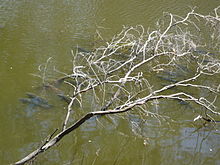 Carp in the duck pond in Herbert Park, Dublin, Ireland

Common carp has been introduced, sometimes illegally, to most continents and some 59 countries. Due to their fecundity and their feeding habit of grubbing through bottom sediments for food they are notorious for altering their environment. In feeding, they may destroy, uproot, disturb and eat submerged vegetation causing serious damage to native duck and fish populations, like canvasbacks.[17] Similar to the Grass Carp, the vegetation they consume is not completly digested and rots, raising the nutritional level of the water and causing exsessive algae growth. They destroy nests of other fish and eat their eggs, reducing their numbers significantly.

Efforts to non-chemically eradicate a small colony from Tasmania's Lake Crescent have been successful, however the long-term, expensive and intensive undertaking is an example of both the possibility and difficulty of safely removing the species once it is established.[18] It has been proposed, but is regarded as environmentally questionable, to control common carp by deliberate exposure to the common carp specific Koi herpes virus with its high mortality rate. In Utah Lake the common carp's population is expected to be reduced by 75% by using nets to catch millions of them and either give them to people who will eat them or processing them into fertilizer. This in turn will give the native June sucker a chance to recover its declining population.

In Australia there is enormous anecdotal and mounting scientific evidence that introduced carp are the cause of permanent turbidity and loss of submergent vegetation in the Murray-Darling river system, with severe consequences for river ecosystems, water quality and native fish species.[19] In Victoria, Australia, Common carp has been declared as noxious fish species therefore there is no restriction on the quantity that a fisher can take.[20] In South Australia, it is an offence for this species to be released back to the wild.[21] An Australian company churns common carp into plant fertilizer.[22]

Common carp are believed to have been introduced into the Canadian province of British Columbia from Washington State. They were first noted in the Okanagan Valley in 1912 as was their rapid growth in population. Carp are currently distributed in the lower Columbia (Arrow Lakes), lower Kootenay, Kettle (Christina Lake), and throughout the Okanagan system.[25]

As food and sport

Cyprinus carpio is the number one fish of aquaculture. The annual tonnage of common carp, not to mention the other cyprinids, produced in China alone exceeds the weight of all other fish, such as trout and salmon, produced by aquaculture world wide. Roughly three million tonnes are produced annually, accounting for 14% of all farmed freshwater fish in 2002. China is by far the largest commercial producer, accounting for about 70% of carp production.[14] Carp is eaten in many parts of the world both when caught from the wild and raised in aquaculture. In Central Europe, carp is a traditional part of a Christmas Eve dinner. In Western Europe, the carp is cultured more commonly as a sport fish although there is a small market as food fish.[26][27] Carp are mixed with other common fish to make gefilte fish, popular in Jewish cuisine.

Common carp are extremely popular with anglers in many parts of Europe, and their popularity as quarry is slowly increasing among anglers in the United States (though destroyed as pests in many areas), and southern Canada. Carp are also popular with spear, bow, and fly fishermen.

The Romans farmed carp and this pond culture continued through the monasteries of Europe and to this day. In China, Korea and soon after in Japan carp farming took place as early as the Yayoi Period (ca. 300 B.C – 300 A.D.).[28]

There is an increasing popularity in the United States for carp eggs that are used for caviar.