The skipjack tuna, Katsuwonus pelamis, is a medium-sized perciform fish in the tuna family, Scombridae. It is otherwise known as the aku, arctic bonito, mushmouth, oceanic bonito, striped tuna, or victor fish. It grows up to 1 m (3 ft) in length.

It is a streamlined, fast-swimming pelagic fish, common in tropical waters throughout the world, where it inhabits surface waters in large shoals (up to 50,000 fish), feeding on fish, crustaceans, cephalopods and mollusks. It is an important prey species for large pelagic fishes and sharks.

Skipjack is the most fecund of the main commercial tunas, and its population is considered sustainable against its current consumption.[1][2] Its fishing is still controversial due to the methodology; with rod and reel or fishery options being promoted as ecologically preferable.[3][4][5]

Skipjack is considered to have "moderate" mercury contamination. As a result, pregnant women are advised against eating large quantities.[7][8][9] 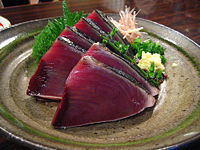 In Japanese cuisine, skipjack tuna is known as katsuo, and is commonly smoked and dried to make katsuobushi, the central ingredient in making dashi (fish stock). Skipjack tuna is also used in katsuo no shiokara.