Anchovy
This article is about a fish. For the town in Jamaica, see Anchovy, Jamaica.

Anchovies are a family (Engraulidae) of small, common salt-water forage fish. There are 144 species in 17 genera, found in the Atlantic, Indian, and Pacific Oceans. Anchovies are usually classified as an oily fish.[1]

Anchovies are small, green fish with blue reflections due to a silver longitudinal stripe that runs from the base of the caudal fin. They range from 2 centimetres (0.79 in) to 40 centimetres (16 in) in adult length,[2] and the body shape is variable with more slender fish in northern populations.

The snout is blunt with tiny, sharp teeth in both jaws. The snout contains a unique rostral organ, believed to be sensory in nature, although its exact function is unknown.[3] The mouth is larger than that of herrings and silversides, two fish anchovies closely resemble in other respects. The anchovy eats plankton and fry (recently-hatched fish).

They are found in scattered areas throughout the world's oceans, but are concentrated in temperate waters, and are rare or absent in very cold or very warm seas. They are generally very accepting of a wide range of temperatures and salinity. Large schools can be found in shallow, brackish areas with muddy bottoms, as in estuaries and bays. Anchovies are abundant in the Mediterranean, particularly in the Alboran Sea;[4] the species is regularly caught along the coasts of Sicily, Italy, France, Turkey and Spain. They are also found on the coast of northern Africa. The range of the species also extends along the Atlantic coast of Europe to the south of Norway. Spawning occurs between October and March, but not in water colder than 12°C (53.6°F). The anchovy appears to spawn at least 100 kilometers (62 mi) from the shore, near the surface of the water.

The anchovy is a significant food source for almost every predatory fish in its environment, including the California halibut, rock fish, yellowtail, shark, chinook, and coho salmon. It is also extremely important to marine mammals and birds; for example, breeding success of California brown pelicans and elegant terns is strongly connected to anchovy abundance.[citation needed] 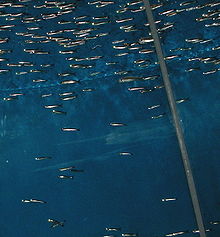 Anchovies at the Monterey Bay Aquarium. 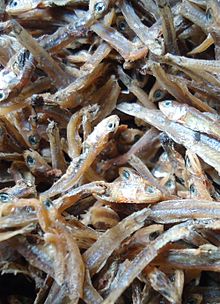 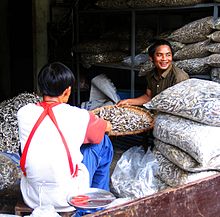 Anchovies are also eaten by humans. When preserved by being gutted and salted in brine, matured, then packed in oil or salt, they acquire a characteristic strong flavor. In Roman times, they were the base for the fermented fish sauce called garum that was a staple of cuisine and an item of long-distance commerce produced in industrial quantities, and were also consumed raw as an aphrodisiac.[5] Today they are used in small quantities to flavor many dishes. Because of the strong flavor, they are also an ingredient in several sauces, including Worcestershire sauce, remoulade and many fish sauces, and in some versions of Café de Paris butter. For domestic use, anchovy fillets are packed in oil or salt in small tins or jars, sometimes rolled around capers. Anchovy paste is also available. Fishermen also use anchovies as bait for larger fish, such as tuna and sea bass.[disambiguation needed

The strong taste people associate with anchovies is due to the curing process. Fresh anchovies, known in Italy as alici, have a much milder flavor.[6] In Sweden and Finland, the name anchovies is related strongly to a traditional seasoning, hence the product "anchovies" is normally made of sprats[7] and also herring can be sold as "anchovy-spiced", leading to confusion when translating recipes.

The European anchovy, Engraulis encrasicolus, is the main commercial anchovy, with Morocco being the largest supplier of canned anchovies.[8] The anchovy industry along the coast of Cantabria, initiated in Cantabria by Sicilian salters in the mid 19th century, now dwarfs the traditional Catalan salters.[8]

Fresh and dried anchovies are a popular part of the cuisine in Kerala and other south Indian states, where they are referred to as kozhuva (and nethili in Tamil Nadu) and provide a cheap source of protein in the diet. Fresh anchovies are eaten fried or as in a spicy curry. In English-speaking countries, alici are sometimes called "white anchovies", and are often served in a weak vinegar marinade, a preservation method associated with the coastal town of Collioure in southeast France. The white fillets (a little like marinated herrings) are sold in heavy salt, or the more popular garlic or tomato oil and vinegar marinade packs.

In Southeast Asian countries, dried anchovies are known as ikan bilis, setipinna taty, or in Indonesia ikan teri, (ikan being the Malay word for fish) and dilis in the Philippines. In Indonesia, Malaysia, and Singapore, anchovies are used to make fish stock, Javanese sambal, or are deep fried. Ikan bilis is normally used in a similar way to dried shrimp in Malaysian cuisine. Anchovy is also used to produce budu, by a fermentation process. In Vietnam, anchovy is the main ingredient in the fish sauce - nước mắm - the unofficial national sauce of Vietnam. In other parts of Asia, such as Korea and Japan, sun-dried anchovies are used to produce a rich soup similar to setipinna taty. In the Philippines, anchovy is very popular in making bagoong, a fermented concoction used for cooking. These anchovy stocks are usually used as a base for noodle soups or traditional Korean soups. There are many other variations on how anchovy is used, especially in Korea.

In North America, anchovies are often used as a pizza topping,[9] as an optional ingredient in Caesar salad, and as a component of Worcestershire sauce.

In Turkey, anchovy is known as hamsi (which is derived from hamsin, an Arabic term for the winter period) and is eaten between November and March. It is generally consumed fried, grilled, steamed, as a meatball, and as Döner, baklava and pilav.[10]

In Tamil Nadu as other south Indian states, anchovy is a delicacy called nethili. It is fried, made into curry with coconut milk or tamarind paste, or pickled. Dried anchovy is kind of staple diet for those in the coastal districts.

Anchovies can concentrate domoic acid, which causes amnesic shellfish poisoning in humans, sea mammals, and birds.[11] If suspected, medical attention should be sought.