Shrimp are swimming, decapod crustaceans classified in the infraorder Caridea, found widely around the world in both fresh and salt water. Adult shrimp are filter feeding benthic animals living close to the bottom. They can live in schools and can swim rapidly backwards. Shrimp are an important food source for larger animals from fish to whales. They have a high tolerance to toxins in polluted areas, and may contribute to high toxin levels in their predators. Together with prawns, shrimp are widely caught and farmed for human consumption.

A number of more or less unrelated crustaceans share the word "shrimp" in their common name. Examples are the mantis shrimp and the opossum or mysid shrimp, both of which belong to the same class (Malacostraca) as decapods including shrimp, but constitute two different orders within it, the Stomatopoda and the Mysidacea. Triops longicaudatus and Triops cancriformis are also popular animals in freshwater aquaria, and are often called shrimp, although they belong instead to the Notostraca, a quite unrelated group. 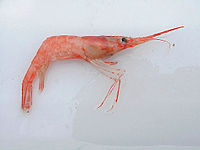 Shrimp (Caridea), such as Pandalus borealis, typically have two pairs of claws, and the second segment of the abdomen overlaps the segments on either side. The abdomen shows a pronounced caridean bend. 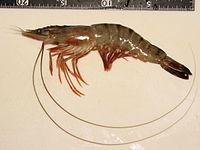 Prawns (Dendrobanchiata), such as Penaeus monodon, typically have three pairs of claws, and even-sized segments on the abdomen. There is no pronounced bend in the abdomen.

The class Malacostraca contains about half of the crustaceans. The members of this class have a primitive body plan that can be described as shrimp-like, consisting of a 5-8-7 body plan. They have a small carapace that encloses the head and the thorax, and have a muscular abdomen for swimming. They also have a thin exoskeleton to maintain a light weight. These general characters are common in all members of the class.

The shrimps also have overlapping segments, however, in a different pattern (segment two overlaps segments one and three), only the first two leg pairs are chelate, and they have a more complex larval form.

Biologists distinguish the true shrimp from the true prawn because of the differences in their gill structures. The gill structure is lamellar in shrimp but branching in prawns. The easiest practical way to separate true shrimps from true prawns is to examine the second abdominal segment. The second segment of a shrimp overlaps both the first and the third segment, while the second segment of a prawn overlaps only the third segment.[2]

The infraorder Caridea is divided into 16 superfamilies:[3]

A number of extinct genera cannot be placed in any superfamily:[3]

While in biological terms shrimps and prawns belong to different suborders of Decapoda, they are very similar in appearance. In commercial farming and fisheries, the terms "shrimp" and "prawn" are often used interchangeably. However, recent aquaculture literature increasingly uses the term "prawn" only for the freshwater forms of palaemonids and "shrimp" for the marine penaeids.[4]

In the United Kingdom, the word “prawn” is more common on menus than “shrimp”; while the opposite is the case in North America. The term “prawn” is also loosely used to describe any large shrimp, especially those that come 15 (or fewer) to the pound (such as “king prawns”, yet sometimes known as “jumbo shrimp”). Australia and some other Commonwealth nations follow this British usage to an even greater extent, using the word “prawn” almost exclusively. When Australian comedian Paul Hogan used the phrase, “I'll slip an extra shrimp on the barbie for you” in an American television advertisement,[5] it was intended to make what he was saying easier for his American audience to understand, and was thus a deliberate distortion of what an Australian would typically say.

In Britain very small crustaceans with a brownish shell are called shrimp, and are used to make potted shrimp. They are also used in dishes where they are not the primary ingredient.

Alpheidae is a family in the superfamilia Alpheoidea. It is a snapping shrimp characterized by having asymmetrical claws, the larger of which is typically capable of producing a loud snapping sound. Another common name of these species include pistol shrimp, its ability also referred to as sonoluminescence when discovered in 2001.[6]

Being neither shrimp nor mantids, the Mantis shrimp are marine crustaceans, the members of the order Stomatopoda, receiving their name purely from the physical resemblance to both. In 2005 it was concluded that they exhibit a similar prey killing dexterity with their claws, thus contributing to the whimsically dubbed "shrimpoluminescence" effect. 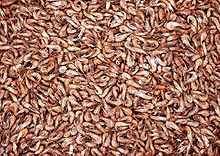 As with other seafood, shrimp is high in calcium, iodine and protein but low in food energy. A shrimp-based meal is also a significant source of cholesterol, from 122 mg to 251 mg per 100 g of shrimp, depending on the method of preparation.[7] Shrimp consumption, however, is considered healthy for the circulatory system because the lack of significant levels of saturated fat in shrimp means that the high cholesterol content in shrimp actually improves the ratio of LDL to HDL cholesterol and lowers triglycerides.[8]

Shrimp and other shellfish are among the most common food allergens.[9] They are not kosher and thus are forbidden in Jewish cuisine. On the other hand, shrimp are halal according to some madhāhib, and therefore are permissible in Islamic cuisine.

Common commercial methods for catching shrimp and prawns include otter trawls, cast nets, seines, shrimp baiting and dip netting. Trawling involves the use of a system of nets. In some parts of the Pacific Northwest, fishing with baited traps is also common.

The following table shows the yearly weight of shrimp and prawns captured globally in millions of tonnes:[10]

Trawl nets in general, and shrimp trawls in particular, have been identified as sources of mortality for species of finfish and cetaceans.[12] Bycatch is often discarded dead or dying by the time it is returned to the sea, and may alter the ecological balance in discarded regions.[13] Worldwide, shrimp trawl fisheries generate about 2% of the world’s catch of fish in weight, but result in more than one third of the global bycatch total. 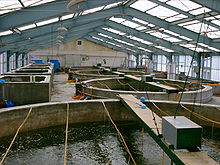 A shrimp farm is an aquaculture business for the cultivation of marine shrimp or prawns for human consumption. Commercial shrimp farming began in the 1970s, and production grew steeply, particularly to match the market demands of the United States, Japan and Western Europe. The total global production of farmed shrimp reached more than 1.6 million tonnes in 2003, representing a value of nearly 9 billion U.S. dollars. About 75% of farmed shrimp are produced in Asia, in particular in China, Thailand and in the Philippines (normally shrimp or prawns are caught in lake, river and sea and are not farmed in tanks). The other 25% are produced mainly in Latin America, where Brazil is the largest producer. The largest exporting nation is Thailand.

Shrimp are marketed and commercialized with several issues in mind. Most shrimp are sold frozen and marketed based on their categorization of presentation, grading, colour, and uniformity.[14] 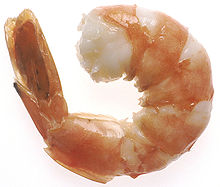 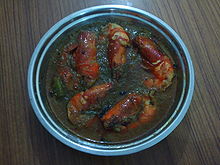 To de-shell a shrimp, the tail is held while gently removing the shell around the body. The tail can be detached completely at this point, or left attached for presentation purposes.

Removing the "sand vein" (a euphemism for the digestive tract) is referred to as "deveining". The sand vein can be removed by making a shallow cut lengthwise down the outer curve of the shrimp's body, allowing the dark ribbon-like digestive tract to be removed with a pointed utensil. Alternatively, if the tail has been detached, the vein can be pinched at the tail end and pulled out completely with the fingers. On large shrimp, the "blood vein" (a euphemism for the ventral nerve cord) along the inner curve of the shrimp's body is typically removed as well. The shrimp is then rinsed under cold running water.

Shrimp and prawns are versatile ingredients, and are often used as an accompaniment to fried rice. Common methods of preparation include baking, boiling, frying, and grilling.

Recipes using shrimp form part of the cuisine of many cultures. Strictly speaking, dishes containing scampi should be made from the Norway lobster, a shrimp-like crustacean more closely related to the lobster than shrimp, but in some places it is quite common for large shrimp to be used instead.

Wet shrimp is commonly used as a flavouring and as a soup base in Asian cuisines while fried shrimp is popular in North America. In Europe, shrimp is very popular, forming a necessary ingredient in Spanish paella de marisco, Italian cacciucco, Portuguese caldeirada and many other seafood dishes. Shrimp curry is very popular in South Asia and Southeast Asia. Shrimp are also found in Latin and Caribbean dishes such as enchiladas and coconut shrimp. Other recipes include jambalaya, okonomiyaki, poon choi and bagoong. Shrimp are also consumed as salad, by frying, with rice, and as shrimp guvec (a dish baked in a clay pot) in the Western and Southern coasts of Turkey.

Most shrimp mature and breed only in a marine habitat, although there are a small number of freshwater species. The females lay 50,000 to 1 million eggs, which hatch after some 24 hours into tiny nauplii. These nauplii feed on yolk reserves within their body and then undergo a metamorphosis into zoeae. This second larval stage feeds in the wild on algae and after a few days metamorphoses again into the third stage to become myses. At this stage the myses already begin to appear like tiny versions of fully developed adults and feed on algae and zooplankton. After another three to four days they metamorphose a final time into postlarvae: young shrimp having all the characteristics of adults. The whole process takes about 12 days from hatching. In the wild, the marine postlarvae then migrate into estuaries, which are rich in nutrients and low in salinity. There they grow and eventually migrate back into open waters when they mature. Most adult shrimp are benthic animals living primarily on the sea floor.

Common shrimp species include pink, brown and snapping shrimp. Depending on the species and location, they grow from about 1.2 to 30 centimetres (0.47 to 12 in) long, and live between one and 6.5 years.[15]

The fossil record of shrimp is sparse, with only 57 exclusively fossil species known.[3] The earliest of these cannot be assigned to any family, but date from the Lower Jurassic and Cretaceous.[16]

Several types of shrimp are kept in home aquaria. Some are purely ornamental, while others are useful in controlling algae and removing debris.[17] Freshwater shrimp commonly available for aquaria include the Bamboo shrimp, Japanese marsh shrimp (Caridina multidentata, also called "Amano shrimp," as their use in aquaria was pioneered by Takashi Amano), cherry shrimp (Neocaridina heteropoda), and ghost or glass shrimp (Palaemonetes spp.). Popular saltwater shrimp include the cleaner shrimp Lysmata amboinensis, the fire shrimp (Lysmata debelius) and the harlequin shrimp (Hymenocera picta).

The term shrimp originated around the 14th century with the Middle English shrimpe, akin to the Middle Low German schrempen, and meaning to contract or wrinkle; and the Old Norse skorpna, meaning to shrivel up.[18]