Toxin
This article is about the class of poisonous substances. For other uses, see Toxin (disambiguation). 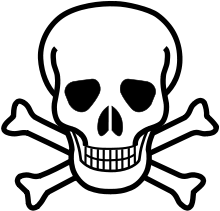 A toxin (from Ancient Greek: τοξικόν toxikon) is a poisonous substance produced within living cells or organisms;[1][2] man-made substances created by artificial processes are thus excluded. The term was first used by organic chemist Ludwig Brieger (1849–1919).[3]

For a toxic substance not produced within living organisms, "toxicant" and "toxics" are also sometimes used.[citation needed].

Toxins can be small molecules, peptides, or proteins that are capable of causing disease on contact with or absorption by body tissues interacting with biological macromolecules such as enzymes or cellular receptors. Toxins vary greatly in their severity, ranging from usually minor and acute (as in a bee sting) to almost immediately deadly (as in botulinum toxin).

Toxins are often distinguished from other chemical agents by their method of production - the word toxin does not specify method of delivery (compare with venom and the narrower meaning of poison – all substances that can also cause disturbances to organisms). It simply means it is a biologically produced poison. There was an ongoing terminological dispute between NATO and the Warsaw Pact over whether to call a toxin a biological or chemical agent, in which the NATO opted for chemical agent, and the Warsaw Pact for biological agent.[citation needed]

According to a International Committee of the Red Cross review of the Biological Weapons Convention, "Toxins are poisonous products of organisms; unlike biological agents, they are inanimate and not capable of reproducing themselves." and "Since the signing of the Convention, there have been no disputes among the parties regarding the definition of biological agents or toxins..."[4]

According to Title 18 of the United States Code, "...the term "toxin" means the toxic material or product of plants, animals, microorganisms (including, but not limited to, bacteria, viruses, fungi, rickettsiae or protozoa), or infectious substances, or a recombinant or synthesized molecule, whatever their origin and method of production..."[5]

A rather informal terminology of individual toxins relate them to the anatomical location where their effects are most notable:

On a broader scale, toxins may be classified as either exotoxins, being excreted by an organism, and endotoxins, that are released mainly when bacteria are lysed.

The term "biotoxin" is sometimes used to explicitly confirm the biological origin.[6][7]

Toxins produced by microorganisms are important virulence determinants responsible for microbial pathogenicity and/or evasion of the host immune response.[8]

Biotoxins vary greatly in purpose and mechanism, and can be highly complex (the venom of the cone snail contains dozens of small proteins, each targeting a specific nerve channel or receptor), or relatively small protein.

Some of the more well known types of biotoxins include:

In these contexts, it can sometimes explicitly include contaminants that are man-made,[12] which contradicts most formal definitions of the term "toxin". Because of this, when encountering the word "toxin" outside of microbiological contexts, it is important to confirm what the researcher means by the use of the term. The toxins from food chains which may be dangerous to human health include:

The Toxicology and Environmental Health Information Program (TEHIP)[23] at the United States National Library of Medicine (NLM) maintains a comprehensive toxicology and environmental health web site that includes access to toxins-related resources produced by TEHIP and by other government agencies and organizations. This web site includes links to databases, bibliographies, tutorials, and other scientific and consumer-oriented resources. TEHIP also is responsible for the Toxicology Data Network (TOXNET),[24] an integrated system of toxicology and environmental health databases that are available free of charge on the web.

In the context of alternative medicine the term is often used to refer to any substance claimed to cause ill health, ranging anywhere from trace amounts of pesticides to common food items like refined sugar or additives such as monosodium glutamate (MSG).[26]