Recombinant DNA (rDNA) molecules are DNA sequences that result from the use of laboratory methods (molecular cloning) to bring together genetic material from multiple sources, creating sequences that would not otherwise be found in biological organisms. Recombinant DNA is possible because DNA molecules from all organisms share the same chemical structure; they differ only in the sequence of nucleotides within that identical overall structure. Consequently, when DNA from a foreign source is linked to host sequences that can drive DNA replication and then introduced into a host organism, the foreign DNA is replicated along with the host DNA.

Recombinant DNA molecules are sometimes called chimeric DNA, because they are usually made of material from two different species, like the mythological chimera.

The DNA sequences used in the construction of recombinant DNA molecules can originate from any species. For example, plant DNA may be joined to bacterial DNA, or human DNA may be joined with fungal DNA. In addition, DNA sequences that do not occur anywhere in nature may be created by the chemical synthesis of DNA, and incorporated into recombinant molecules. Using recombinant DNA technology and synthetic DNA, literally any DNA sequence may be created and introduced into any of a very wide range of living organisms.

It is important to note that recombinant DNA differs from genetic recombination in that the former results from artificial methods in the test tube, while the latter is a normal biological process that results in the remixing of existing DNA sequences in essentially all organisms. 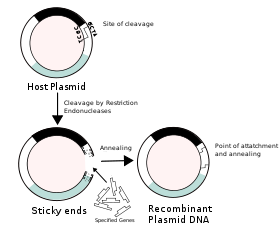 Molecular cloning is the laboratory process used to create recombinant DNA.[1][2][3][4] It is one of two widely-used methods (along with polymerase chain reaction, abbr. PCR) used to direct the replication of any specific DNA sequence chosen by the experimentalist. The fundamental difference between the two methods is that molecular cloning involves replication of the DNA within a living cell, while PCR replicates DNA in the test tube, free of living cells.

Formation of recombinant DNA requires a cloning vector, a DNA molecule that will replicate within a living cell. Vectors are generally derived from plasmids or viruses, and represent relatively small segments of DNA that contain necessary genetic signals for replication, as well as additional elements for convenience in inserting foreign DNA, identifying cells that contain recombinant DNA, and, where appropriate, expressing the foreign DNA. The choice of vector for molecular cloning depends on the choice of host organism, the size of the DNA to be cloned, and whether and how the foreign DNA is to be expressed.[5] The DNA segments can be combined by using a variety of methods, such as restriction enzyme/ligase cloning or Gibson assembly.

In standard cloning protocols, the cloning of any DNA fragment essentially involves seven steps: (1) Choice of host organism and cloning vector, (2) Preparation of vector DNA, (3) Preparation of DNA to be cloned, (4) Creation of recombinant DNA, (5) Introduction of recombinant DNA into the host organism, (6) Selection of organisms containing recombinant DNA, (7) Screening for clones with desired DNA inserts and biological properties.[4] These steps are described in some detail in a related article (molecular cloning).

Following transplantation into the host organism, the foreign DNA contained within the recombinant DNA construct may or may not be expressed. That is, the DNA may simply be replicated without expression, or it may be transcribed and translated so that a recombinant protein is produced. Generally speaking, expression of a foreign gene requires restructuring the gene to include sequences that are required for producing a mRNA molecule that can be used by the host's translational apparatus (e.g. promoter, translational initiation signal, and transcriptional terminator).[6] Specific changes to the host organism may be made to improve expression of the ectopic gene. In addition, changes may be needed to the coding sequences as well, to optimize translation, make the protein soluble, direct the recombinant protein to the proper cellular or extracellular location, and stabilize the protein from degradation.[7]

In most cases, organisms containing recombinant DNA have apparently normal phenotypes. That is, their appearance, behavior and metabolism are usually unchanged, and the only way to demonstrate the presence of recombinant sequences is to examine the DNA itself, typically using a polymerase chain reaction (PCR) test.[8] Significant exceptions exist, and are discussed below.

In some cases, recombinant DNA can have deleterious effects even if it is not expressed. One mechanism by which this happens is insertional inactivation, in which the rDNA becomes inserted into a host cell’s gene. In some cases, researchers use this phenomenon to “knock out” genes in order to determine their biological function and importance.[10] Another mechanism by which rDNA insertion into chromosomal DNA can affect gene expression is by inappropriate activation of previously unexpressed host cell genes. This can happen, for example, when a recombinant DNA fragment containing an active promoter becomes located next to a previously silent host cell gene, or when a host cell gene that functions to restrain gene expression undergoes insertional inactivation by recombinant DNA.

Recombinant DNA is widely used in biotechnology, medicine and research. Today, recombinant proteins and other products that result from the use of rDNA technology are found in essentially every western pharmacy, doctor's or veterinarian's office, medical testing laboratory, and biological research laboratory. In addition, organisms that have been manipulated using recombinant DNA technology, and products derived from those organisms have found their way into many farms, supermarkets, home medicine cabinets and even pet shops.

The most common application of recombinant DNA is in basic research, where it is important to most current work in the biological and biomedical sciences.[8] Recombinant DNA is used to identify, map and sequence genes, and to determine their function. rDNA probes are employed in analyzing gene expression within individual cells, and throughout the tissues of whole organisms. Recombinant proteins are widely used as reagents in laboratory experiments and to generate antibody probes for examining protein synthesis within cells and organisms.[2]

Many additional practical applications of recombinant DNA are found in human and veterinary medicine, in agriculture, and in bioengineering.[2] Some specific examples are identified below.

The idea for recombinant DNA was first proposed by Peter Lobban, a graduate student of Prof. Dale Kaiser in the Biochemistry Department at Stanford University Medical School.[18] The first publications describing the successful production and intracellular replication of recombinant DNA appeared in 1972 and 1973.[19][20][21] Stanford University applied for a US patent on recombinant DNA in 1974, listing the inventors as Stanley N. Cohen and Herbert W. Boyer; this patent was awarded in 1980.[22] The first licensed drug generated using recombinant DNA technology was human insulin, developed by Genentech and Licensed by Eli Lilly and Company.[23]

Scientists associated with the initial development of recombinant DNA methods recognized that the potential existed for organisms containing recombinant DNA to have undesirable or dangerous properties. At the 1975 Asilomar Conference on Recombinant DNA, these concerns were discussed and a voluntary moratorium on recombinant DNA research was initiated for experiments that were thought to be particularly risky. This moratorium was widely observed until the National Institutes of Health (USA) developed and issued formal guidelines for rDNA work. Today, recombinant DNA molecules and recombinant proteins are usually not regarded as dangerous. However, concerns remain about some organisms that express recombinant DNA, particularly when they leave the laboratory and are introduced into the environment or food chain. These concerns are discussed in the articles on genetically-modified organisms and genetically-modified food controversies.