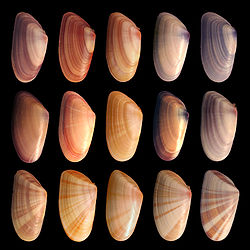 A phenotype is an organism's observable characteristics or traits: such as its morphology, development, biochemical or physiological properties, behavior, and products of behavior (such as a bird's nest). Phenotypes result from the expression of an organism's genes as well as the influence of environmental factors and the interactions between the two.

This genotype-phenotype distinction was proposed by Wilhelm Johannsen in 1911 to make clear the difference between an organism's heredity and what that heredity produces.[1][2] The distinction is similar to that proposed by August Weismann, who distinguished between germ plasm (heredity) and somatic cells (the body). The Genotype-Phenotype concept should not be confused with Francis Crick's central dogma of molecular biology which is a statement about the directionality of molecular sequential information flowing from DNA to protein (but which cannot become transferred from proteins).

Despite its seemingly straightforward definition, the concept of the phenotype has hidden subtleties. It may seem that anything dependent on the genotype is a phenotype, including molecules such as RNA and proteins. Most molecules and structures coded by the genetic material are not visible in the appearance of an organism, yet they are observable (for example by Western blotting) and are thus part of the phenotype. Human blood groups are an example. It may also seem that this goes beyond the original intentions of the concept with its focus on the (living) organism in itself, meaning that the lowest level of biological organization compatible with the phenotype concept is at the cellular level. Either way, the term phenotype includes traits or characteristics that can be made visible by some technical procedure. Another extension adds behavior to the phenotype, since behaviors are also observable characteristics. Indeed there is research into the clinical relevance of behavioral phenotypes as they pertain to a range of syndromes.[3][4] Often, the term "phenotype" is incorrectly used as a shorthand to indicate phenotypical changes observed in mutated organisms (most often in connection with knockout mice).[5] 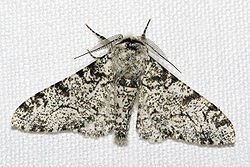 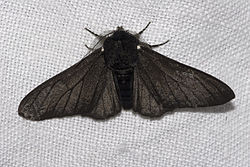 The interaction between genotype and phenotype has often been conceptualized by the following relationship:

A more nuanced version of the relationship is:

Genotypes often have much flexibility in the modification and expression of phenotypes; in many organisms these phenotypes are very different under varying environmental conditions. The plant Hieracium umbellatum is found growing in two different habitats in Sweden. One habitat is rocky, sea-side cliffs, where the plants are bushy with broad leaves and expanded inflorescences; the other is among sand dunes where the plants grow prostrate with narrow leaves and compact inflorescences. These habitats alternate along the coast of Sweden and the habitat that the seeds of Hieracium umbellatum land in, determine the phenotype that grows.[6]

An example of random variation in Drosophila flies is the number of ommatidia, which may vary (randomly) between left and right eyes in a single individual as much as they do between different genotypes overall, or between clones raised in different environments.

The concept of phenotype can be extended to variations below the level of the gene that affect an organism's fitness. For example, silent mutations that do not change the corresponding amino acid sequence of a gene may change the frequency of guanine-cytosine base pairs (GC content). These base pairs have a higher thermal stability (melting point, see also DNA-DNA hybridization) than adenine-thymine, a property that might convey, among organisms living in high-temperature environments, a selective advantage on variants enriched in GC content.

The idea of the phenotype has been generalized by Richard Dawkins in The Extended Phenotype to mean all the effects a gene has on the outside world that may influence its chances of being replicated. These can be effects on the organism in which the gene resides, the environment, or other organisms.

For instance, a beaver dam might be considered a phenotype of beaver genes, the same way beavers' powerful incisor teeth are phenotype expressions of their genes. Dawkins also cites the effect of an organism on the behaviour of another organism (such as the devoted nurturing of a cuckoo by a parent clearly of a different species) as an example of the extended phenotype.

Although a phenotype is the ensemble of observable characteristics displayed by an organism, the word phenome is sometimes used to refer to a collection of traits and their simultaneous study is referred to as as phenomics.[8][9]