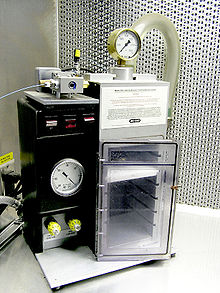 A gene gun or a biolistic particle delivery system, originally designed for plant transformation, is a device for injecting cells with genetic information. The payload is an elemental particle of a heavy metal coated with plasmid DNA. This technique is often simply referred to as bioballistics or biolistics.

The gene gun was originally a Crosman air pistol modified to fire dense tungsten particles. The design was first used on onions to deliver particles coated with a marker gene. Genetic transformation can then be proven when the onion tissue expresses the gene.

The earliest custom manufactured gene guns (fabricated by Nelson Allen) used a 22 caliber nail gun cartridge to propel an extruded polyethylene cylinder (bullet) down a 22 cal. Douglas barrel. A droplet of the tungsten powder and genetic material was placed on the bullet and shot down the barrel at a lexan "stopping" disk with a petri dish below. The bullet welded to the disk and the genetic information blasted into the sample in the dish with a doughnut effect (devastation in the middle, a ring of good transformation and little around the edge). The gun was connected to a vacuum pump and was under vacuum while firing. The early design was put into limited production by a Rumsey-Loomis (a local machine shop then at Mecklenburg Rd in Ithaca, NY, USA). Later the design was refined by removing the "surge tank" and changing to nonexplosive propellants. DuPont added a plastic extrusion to the exterior to visually improve the machine for mass production to the scientific community. Biorad contracted with Dupont to manufacture and distribute the device. Improvements include the use of helium propellant and a multi-disk-collision delivery mechanism. Other heavy metals such as gold and silver are also used. Gold may be favored because it has better uniformity than tungsten and tungsten can be toxic to cells, but its use may be limited due to availability and cost.

Gene guns are so far mostly applied for plant cells. However, there is much potential use in animals and humans as well.

The target of a gene gun is often a callus of undifferentiated plant cells growing on gel medium in a petri dish. After the gold particles have impacted the dish, the gel and callus are largely disrupted. However, some cells were not obliterated in the impact, and have successfully enveloped a DNA coated tungsten particle, whose DNA eventually migrates to and integrates into a plant chromosome.

Cells from the entire petri dish can be re-collected and selected for successful integration and expression of new DNA using modern biochemical techniques, such as a using a tandem selectable gene and northern blots.

Selected single cells from the callus can be treated with a series of plant hormones, such as auxins and gibberellins, and each may divide and differentiate into the organized, specialized, tissue cells of an entire plant. This capability of total re-generation is called totipotency. The new plant that originated from a successfully shot cell may have new genetic (heritable) traits.

Gene guns have also been used to deliver DNA vaccines.

The delivery of plasmids into rat neurons through the use of a gene gun, specifically DRG neurons, is also used as a pharmacological precursor in studying the effects of neurodegenerative diseases such as Alzheimer's Disease.

The gene gun technique is also popularly used in an edible vaccine production technique, where the nano-gold particles coated with plant genetic material under the high vacuum pressurized chamber are transformed into suitable plant tissues.

The gene gun has become a common tool for labeling subsets of cells in cultured tissue. In addition to being able to transfect cells with DNA plasmids coding for fluorescent proteins, the gene gun can be adapted to deliver a wide variety of vital dyes to cells.[1]

Gene gun bombardment has also been used to transform C. elegans, as an alternative to microinjection.[2]