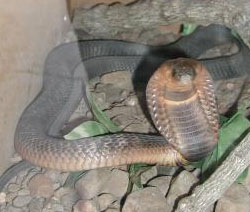 The Elapidae, or elapids, are a of venomous snakes found in tropical and subtropical regions around the world, including the and the . They are characterized by possessing a set of hollow, fixed fangs through which they inject venom, and come in a wide range of sizes, from only 18 cm ("") up to 6 m in length ("Ophiophagus"). Currently, 61 genera that include 231 are recognized.

Outwardly, terrestrial elapids look similar to the : almost all have long and slender bodies with smooth scales, a head that is covered with large shields and not always distinct from the neck, and eyes with round pupils. In addition, their behavior is usually quite active and most are . There are exceptions to all these generalizations: e.g. the death adders ("Acanthophis") include short and fat, rough-scaled, very broad-headed, cat-eyed, live-bearing, sluggish ambush predators with partly fragmented head shields.

Some elapids are strongly arboreal (African "Pseudohaje" and "Dendroaspis", Australian "Hoplocephalus"), while many others are more or less specialised burrowers (e.g. "Ogmodon", "Parapistocalamus", "Simoselaps", "Toxicocalamus", "Vermicella") in either humid or arid environments. Some species have very generalised diets but many taxa have narrow prey preferences and correlated morphological specialisations, e.g. for feeding on other snakes, elongate burrowing lizards, squamate eggs, mammals, birds, frogs, fish, etc.

, which are also elapids, have adapted to a marine way of life in different ways and to various degrees. All have evolved paddle-like tails for swimming and the ability to excrete salt. Most also have laterally compressed bodies, are much reduced in size, their nostrils are located dorsally (no ) and give birth to live young (ovoviviparous). In general they have the ability to respire through their skin; experiments with the yellow-bellied sea snake, "", have shown that this species can satisfy about 20% of its oxygen requirements in this manner, allowing for prolonged dives. The sea kraits ("Laticauda sp. "), are the least well-adapted to an aquatic life. They spend much of their time on land, where they lay their eggs. They have wide ventral scales, the tail is not as well-developed for swimming, and their nostrils are separated by internasal scales.

All elapids have a pair of proteroglyphous fangs that are used to inject from glands located towards the rear of the upper jaws. The fangs are the first two teeth on each bone, which are enlarged and hollow, and usually only one is in place on each side at any time. The maxilla is intermediate in length and mobility between typical colubrids (long, less mobile) and viperids (very short, highly mobile). When the mouth is closed, the fangs fit into grooved slots in the floor; in the longest-fanged elapids (e.g. "Acanthophis", "Oxyuranus") it is common for the fangs to pierce right through the intermandibular skin, which does not seem to endanger the snake. The fangs are usually below the front edge of the eye and are angled backwards; due to this construction, most elapids must actually bite in order to envenomate. This action is therefore not as quick as with the viperids, that can envenomate with only a quick, stabbing motion. Some elapids ("Acanthophis", "Oxyuranus", and especially "Dendroaspis") have long fangs on quite mobile maxillae (the prefrontal and ectopterygoid contacts are nearly as close together as in viperids), and can therefore make very fast stabbing strikes like viperids. A few species are capable of spraying their venom from forward facing holes at the tips of their fangs as a means of defense. Elapids use their venom both to immobilize their prey and in self-defense.

All elapids are venomous and many are potentially deadly. The venoms are mostly neurotoxic and are considered more dangerous than the mainly proteolytic viper venoms. Members include the black mamba (""), a species many regard as the world's most dangerous snake, the inland taipan (""), which is the most venomous land snake, and "", a sea snake and the most toxic venom of all snakes.

"*) Not including the nominate subspecies."

The table above lists all of the elapid genera and no subfamilies. In the past, many subfamilies were recognized, or have been suggested for the Elapidae, including the Elapinae, Hydrophiinae (s), Micrurinae (coral snakes), Acanthophiinae (Australian elapids) and the Laticaudinae (sea kraits). Currently, none are universally recognized. There is now good molecular evidence for reciprocal monophyly of two groups: the African, Asian and New World Elapinae, and Australasian and marine Hydrophiinae. Thus, the Australian terrestrial elapids are 'hydrophiines', though not sea snakes, while it is believed that and the 'true sea snakes' evolved separately from among the Australasian land-snakes. Asian cobras, coral snakes, and American coral snakes also appear to be monophyletic, while African cobras do not. [cite journal
title= Phylogenetic Relationships of Elapid Snakes Based on Cytochrome b mtDNA Sequences
author = Slowinski, J. B. and [http://www.anu.edu.au/BoZo/keogh.html Keogh J. S.]
journal = Molecular Phylogenetics and Evolution
volume = 15
issue= 1
pages= 157–164
month= April | year= 2000
url= http://www.ingentaconnect.com/content/ap/fy/2000/00000015/00000001/art00725
doi = 10.1006/mpev.1999.0725]

The for the Elapidae was originally "Elaps", but that group was moved to another family. In contrast to what usually happens in , the "Elapidae" family was not renamed. In the meantime, "Elaps" was renamed "" and moved back to the "Elapidae". However, Nagy et al. 2005 regard it as a sister taxon to "" which should therefore have been assigned to the "".

*
*
* , overview of all snake families and genera.