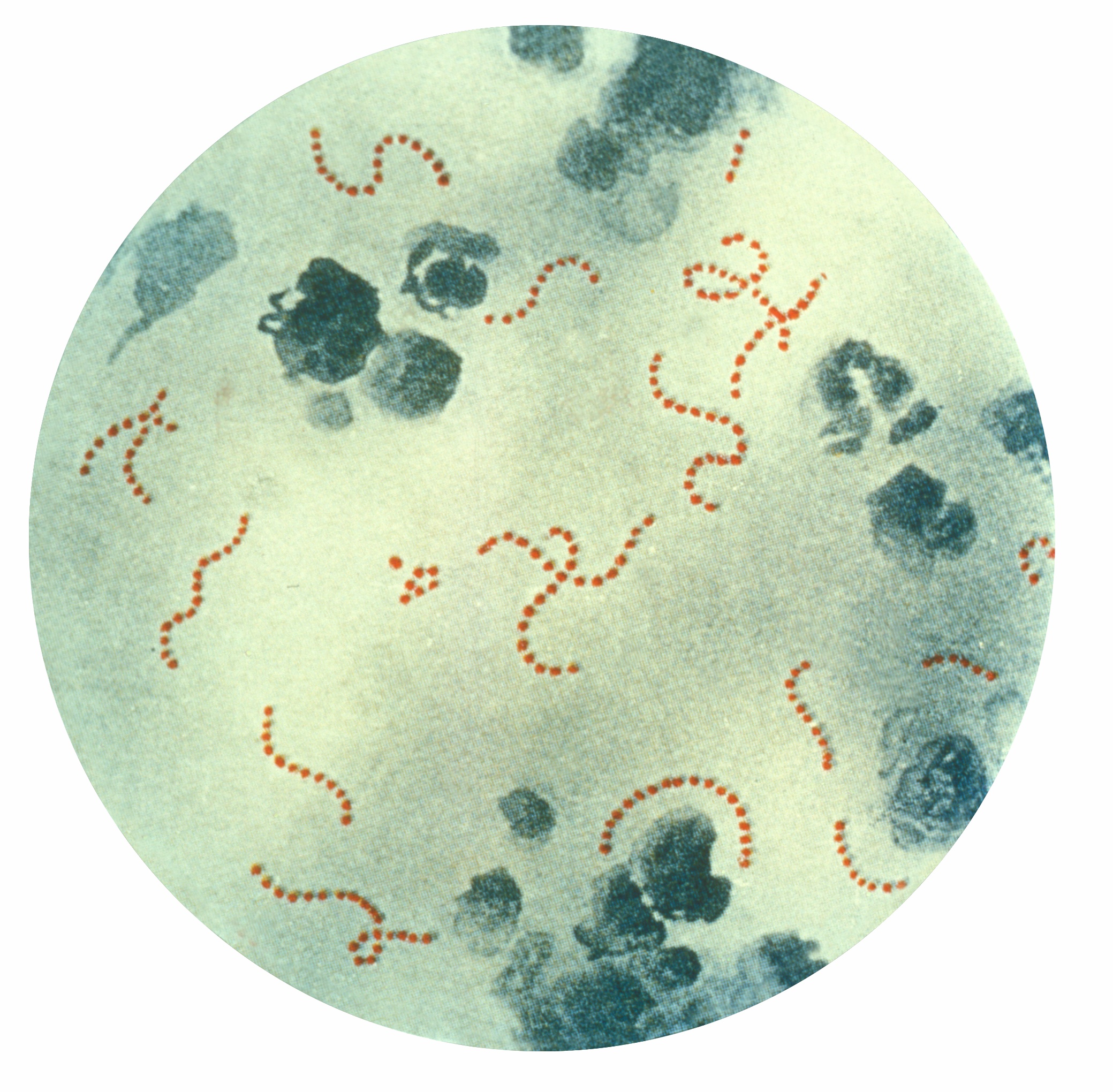 "Streptococcus pyogenes" is a spherical that grows in long chains

In 1928, published a method for serotyping "S. pyogenes" based on its "M protein", a factor that is displayed on its surface.

"S. pyogenes" can also cause disease in the form of post-infectious "non-pyogenic" (not associated with local bacterial multiplication and pus formation) syndromes. These mediated complications follow a small percentage of infections and include and acute poststreptococcal . Both conditions appear several weeks following the initial streptococcal infection. is characterised by inflammation of the joints and/or heart following an episode of Streptococcal . Acute , inflammation of the renal , can follow Streptococcal or skin infection.

This bacterium remains acutely sensitive to . Failure of treatment with is generally attributed to other local commensal organisms producing β-lactamase or failure to achieve adequate tissue levels in the pharynx. Certain strains have developed resistance to , and .

"S. pyogenes" has several factors that enable it to attach to host tissues, evade the immune response, and spread by penetrating host tissue layers.

"S. pyogenes" releases a number of proteins, including several virulence factors, into its host:

;Streptolysin O and S:These are toxins which are the basis of the organism's beta-hemolytic property. Streptolysin O is a potent cell poison affecting many types of cell including neutrophils, platelets, and sub-cellular organelles. It causes an immune response and detection of antibodies to it; antistreptolysin O (ASO) can be clinically used to confirm a recent infection. Streptolysin O is cardiotoxic.

;Streptococcal pyogenic (Spe) A and C:SpeA and SpeC are secreted by many strains of "S. pyogenes". These pyogenic exotoxins are responsible for the of and many of the symptoms of streptococcal .

;:Enzymatically activates , a proteolytic enzyme, into which in turn digests and other proteins.

;:It is widely assumed that facilitates the spread of the bacteria through tissues by breaking down , an important component of . However, very few isolates of "S. pyogenes" are capable of secreting active hyaluronidase due to mutations in the gene that encode the enzyme. Moreover, the few isolates that are capable of secreting hyaluronidase do not appear to need it to spread through tissues or to cause skin lesions.

;Streptodornase:Most strains of "S. pyogenes" secrete up to four different s, which are sometimes called "streptodornase". The DNases protect the bacteria from being trapped in (NETs) by digesting the NET's web of DNA, to which are bound s that can kill the bacteria.

; :C5a peptidase cleaves a potent chemotaxin called , which is produced by the complement system.

;Streptococcal chemokine protease:The affected tissue of patients with severe cases of are devoid of s.

Usually, a throat swab is taken to the laboratory for testing. A is performed to show Gram positive, cocci, in chains. Then, culture the organism on with added antibiotic disk to show beta-haemolytic colonies and sensitivity (zone of inhibition around the disk) for the antibiotic. Then, perform test, which should show a negative reaction for all "Streptococci". "S. pyogenes" is cAMP and tests negative. Serological identification of the organism involves testing for the presence of group A specific polysaccharide in the bacterium's cell wall using the test.

The treatment of choice is , however in the absence of readily available penicillin, small incisions made to the infected area will relieve swelling and discomfort until proper medical assistance can be sought. There is no reported instance of penicillin-resistance reported to date, although since 1985 there have been many reports of penicillin-tolerance. [cite journal|journal=J Pediatr|year=1985|volume=107|issue=5|pages=681&ndash;4|title=Association of penicillin tolerance with failure to eradicate group A streptococci from patients with pharyngitis|author=Kim KS, Kaplan EL|pmid=3903089|doi=10.1016/S0022-3476(85)80392-9]

, , and s may be used if the strain isolated has been shown to be sensitive, but resistance is much more common.