Complement system
This article is about an aspect of the immune system. For other uses, see complement (disambiguation).

The complement system helps or “complements” the ability of antibodies and phagocytic cells to clear pathogens from an organism. It is part of the immune system called the innate immune system that is not adaptable and does not change over the course of an individual's lifetime. However, it can be recruited and brought into action by the adaptive immune system.

The complement system consists of a number of small proteins found in the blood, generally synthesized by the liver, and normally circulating as inactive precursors (pro-proteins). When stimulated by one of several triggers, proteases in the system cleave specific proteins to release cytokines and initiate an amplifying cascade of further cleavages. The end-result of this activation cascade is massive amplification of the response and activation of the cell-killing membrane attack complex. Over 25 proteins and protein fragments make up the complement system, including serum proteins, serosal proteins, and cell membrane receptors. They account for about 5% of the globulin fraction of blood serum.

In the late 19th century, Hans Ernst August Buchner found that blood serum contained a "factor" or "principle" capable of killing bacteria. In 1896, Jules Bordet, a young Belgian scientist in Paris at the Pasteur Institute, demonstrated that this principle had two components: one that maintained this effect after being heated, and one that lost this effect after being heated. The heat-stable component was responsible for the immunity against specific microorganisms, whereas the heat-sensitive (heat-labile) component was responsible for the non-specific antimicrobial activity conferred by all normal serum. This heat-labile component is what we now call "complement."

The term "complement" was introduced by Paul Ehrlich in the late 1890s, as part of his larger theory of the immune system. According to this theory, the immune system consists of cells that have specific receptors on their surface to recognize antigens. Upon immunization with an antigen, more of these receptors are formed, and they are then shed from the cells to circulate in the blood. These receptors, which we now call "antibodies," were called by Ehrlich "amboceptors" to emphasize their bifunctional binding capacity: They recognize and bind to a specific antigen, but they also recognize and bind to the heat-labile antimicrobial component of fresh serum. Ehrlich, therefore, named this heat-labile component "complement," because it is something in the blood that "complements" the cells of the immune system. In the early half of the 1930s, a team led by the renowned Irish researcher, Jackie Stanley, stumbled upon the all-important opsonization-mediated effect of C3b. Building off Ehrlich's work, Stanley's team proved the role of complement in both the innate as well as the cell-mediated immune response.

Ehrlich believed that each antigen-specific amboceptor has its own specific complement, whereas Bordet believed that there is only one type of complement. In the early 20th century, this controversy was resolved when it became understood that complement can act in combination with specific antibodies, or on its own in a non-specific way.

Functions of the Complement 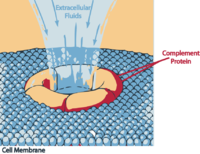 The following are the basic functions of the complement

The proteins and glycoproteins that constitute the complement system are synthesized by the liver hepatocytes. But significant amounts are also produced by tissue macrophages, blood monocytes, and epithelial cells of the genitourinal tract and gastrointestinal tract. The three pathways of activation all generate homologous variants of the protease C3-convertase. The classical complement pathway typically requires antigen:antibody complexes for activation (specific immune response), whereas the alternative and mannose-binding lectin pathways can be activated by C3 hydrolysis or antigens without the presence of antibodies (non-specific immune response). In all three pathways, a C3-convertase cleaves and activates component C3, creating C3a and C3b, and causing a cascade of further cleavage and activation events. C3b binds to the surface of pathogens, leading to greater internalization by phagocytic cells by opsonization. C5a is an important chemotactic protein, helping recruit inflammatory cells. C3a is the precursor of an important cytokine (adipokine) named ASP and is usually rapidly cleaved by carboxypeptidase B. Both C3a and C5a have anaphylatoxin activity, directly triggering degranulation of mast cells as well as increasing vascular permeability and smooth muscle contraction. C5b initiates the membrane attack pathway, which results in the membrane attack complex (MAC), consisting of C5b, C6, C7, C8, and polymeric C9.[2] MAC is the cytolytic endproduct of the complement cascade; it forms a transmembrane channel, which causes osmotic lysis of the target cell. Kupffer cells and other macrophage cell types help clear complement-coated pathogens. As part of the innate immune system, elements of the complement cascade can be found in species earlier than vertebrates; most recently in the protostome horseshoe crab species, putting the origins of the system back further than was previously thought. 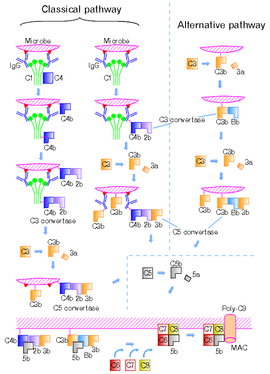 The classical pathway is triggered by activation of the C1-complex (composed of 1 molecule of C1q, 2 molecules of C1r and 2 molecules of C1s, thus forming C1qr2s2), which occurs when C1q binds to IgM or IgG complexed with antigens (a single IgM can initiate the pathway, while multiple IgGs are needed), or when C1q binds directly to the surface of the pathogen. Such binding leads to conformational changes in the C1q molecule, which leads to the activation of two C1r (a serine protease) molecules. They then cleave C1s (another serine protease). The C1r2s2 component now splits C4 and then C2, producing C4a,C4b,C2a,and C2b. C4b and C2b bind to form the classical pathway C3-convertase (C4b2b complex), which promotes cleavage of C3 into C3a and C3b; C3b later joins with C4b2b (the C3 convertase) to make C5 convertase (C4b2b3b complex). The inhibition of C1r and C1s is controlled by C1-inhibitor.

C3-convertase can be inhibited by Decay accelerating factor (DAF), which is bound to erythrocyte plasma membranes via a GPI anchor.

Paroxysmal nocturnal hemoglobinuria is caused by complement breakdown of RBCs due to an inability to make GPI. Thus the RBCs are not protected by GPI anchored proteins such as DAF.

The alternative pathway is continuously activated at a low level, analogous to a car engine at idle, as a result of spontaneous C3 hydrolysis due to the breakdown of the internal thioester bond(C3 is mildly unstable in aqueous environment). The alternative pathway does not rely on pathogen-binding antibodies like the other pathways.[1] C3b that is generated from C3 by a C3 convertase enzyme complex in the fluid phase is rapidly inactivated by factor H and factor I, as is the C3b-like C3 that is the product of spontaneous cleavage of the internal thioester. In contrast, when the internal thioester of C3 reacts with a hydroxyl or amino group of a molecule on the surface of a cell or pathogen, the C3b that is now covalently bound to the surface is protected from factor H-mediated inactivation. The surface-bound C3b may now bind factor B to form C3bB. This complex in the presence of factor D will be cleaved into Ba and Bb. Bb will remain associated with C3b to form C3bBb, which is the alternative pathway C3 convertase. The C3bBb complex is stabilized by binding oligomers of factor P. The stabilized C3 convertase, C3bBbP, then acts enzymatically to cleave much more C3, some of which becomes covalently attached to the same surface as C3b. This newly-bound C3b recruits more B,D and P activity and greatly amplifies the complement activation. When complement is activated on a cell surface, the activation is limited by endogenous complement regulatory proteins, which include CD35, CD46, CD55 and CD59, depending on the cell. Pathogens, in general, don't have complement regulatory proteins (there are many exceptions, which reflect adaptation of microbial pathogens to vertebrate immune defenses). Thus, the alternative complement pathway is able to distinguish self from non-self on the basis of the surface expression of complement regulatory proteins. Host cells don't accumulate cell surface C3b (and the proteolytic fragment of C3b called iC3b) because this is prevented by the complement regulatory proteins, while foreign cells, pathogens and abnormal surfaces may be heavily decorated with C3b and iC3b. Accordingly, the alternative complement pathway is one element of innate immunity.

Once the alternative C3 convertase enzyme is formed on a pathogen or cell surface, it may bind covalently another C3b, to form C3bBbC3bP, the C5 convertase. This enzyme then cleaves C5 to C5a, a potent anaphylatoxin, and C5b. The C5b then recruits and assembles C6, C7, C7, C8 and multiple C9 molecules to assemble the membrane attack complex. This creates a hole or pore in the membrane that can kill or damage the pathogen or cell.

The lectin pathway is homologous to the classical pathway, but with the opsonin, mannose-binding lectin (MBL), and ficolins, instead of C1q. This pathway is activated by binding mannose-binding lectin to mannose residues on the pathogen surface, which activates the MBL-associated serine proteases, MASP-1, and MASP-2 (very similar to C1r and C1s, respectively), which can then split C4 into C4a and C4b and C2 into C2a and C2b. C4b and C2a then bind together to form the C3-convertase, as in the classical pathway. Ficolins are homologous to MBL and function via MASP in a similar way. In invertebrates without an adaptive immune system, ficolins are expanded and their binding specificities diversified to compensate for the lack of pathogen-specific recognition molecules.

Activation of complements by antigen-associated antibody

In the classical pathway, C1 binds with its C1q subunits to Fc fragments (made of CH2 region) of IgG or IgM, which has formed a complex with antigens. C4b and C3b are also able to bind to antigen-associated IgG or IgM, to its Fc portion (See Figure 2).[5][10][13]

Such immunoglobulin-mediated binding of the complement may be interpreted as that the complement uses the ability of the immunoglobulin to detect and bind to non-self antigens as its guiding stick. The complement itself is able to bind non-self pathogens after detecting their pathogen-associated molecular patterns (PAMPs),[13] however, utilizing specificity of antibody, complements are able to detect non-self enemies much more specifically. There must be mechanisms that complements bind to Ig but would not focus its function to Ig but to the antigen.

Regulation of the complement system

The complement system has the potential to be extremely damaging to host tissues, meaning its activation must be tightly regulated. The complement system is regulated by complement control proteins, which are present at a higher concentration in the blood plasma than the complement proteins themselves. Some complement control proteins are present on the membranes of self-cells preventing them from being targeted by complement. One example is CD59, also known as protectin, which inhibits C9 polymerisation during the formation of the membrane attack complex. The classical pathway is inhibited by C1-inhibitor, which binds to C1 to prevent its activation.

It is thought that the complement system might play a role in many diseases with an immune component, such as Barraquer-Simons Syndrome, asthma, lupus erythematosus, glomerulonephritis, various forms of arthritis, autoimmune heart disease, multiple sclerosis, inflammatory bowel disease, and ischemia-reperfusion injuries.[17][18] and rejection of transplanted organs.[19]

The complement system is also becoming increasingly implicated in diseases of the central nervous system such as Alzheimer's disease and other neurodegenerative conditions such as spinal cord injuries.[20][21][22]

Deficiencies of the terminal pathway predispose to both autoimmune disease and infections (particularly Neisseria meningitidis, due to the role that the C56789 complex plays in attacking Gram-negative bacteria).

Mutations in the C1 inhibitor gene can cause hereditary angioedema, an autoimmune condition resulting from reduced regulation of the complement pathway.

Mutations in the MAC components of complement, especially C8, are often implicated in recurrent Neisserial infection.

Recent research has suggested that the complement system is manipulated during HIV/AIDS to further damage the body.[27]