Chemokines (Greek -kinos, movement) are a family of small cytokines, or proteins secreted by cells. Their name is derived from their ability to induce directed chemotaxis in nearby responsive cells; they are chemotactic cytokines. Proteins are classified as chemokines according to shared structural characteristics such as small size (they are all approximately 8-10 kilodaltons in size), and the presence of four cysteine residues in conserved locations that are key to forming their 3-dimensional shape. However, these proteins have historically been known under several other names including the SIS family of cytokines, SIG family of cytokines, SCY family of cytokines, Platelet factor-4 superfamily or intercrines. Some chemokines are considered pro-inflammatory and can be induced during an immune response to recruit cells of the immune system to a site of infection, while others are considered homeostatic and are involved in controlling the migration of cells during normal processes of tissue maintenance or development. Chemokines are found in all vertebrates, some viruses and some bacteria, but none have been described for other invertebrates. These proteins exert their biological effects by interacting with G protein-linked transmembrane receptors called chemokine receptors, that are selectively found on the surfaces of their target cells.

Chemokines released by infected or damaged cells form a concentration gradient. Attracted cells move through the gradient towards the higher concentration of chemokine.

The major role of chemokines is to act as a chemoattractant to guide the migration of cells. Cells that are attracted by chemokines follow a signal of increasing chemokine concentration towards the source of the chemokine. Some chemokines control cells of the immune system during processes of immune surveillance, such as directing lymphocytes to the lymph nodes so they can screen for invasion of pathogens by interacting with antigen-presenting cells residing in these tissues. These are known as homeostatic chemokines and are produced and secreted without any need to stimulate their source cell(s). Some chemokines have roles in development; they promote angiogenesis (the growth of new blood vessels), or guide cells to tissues that provide specific signals critical for cellular maturation. Other chemokines are inflammatory and are released from a wide variety of cells in response to bacterial infection, viruses and agents that cause physical damage such as silica or the urate crystals that occur in gout. Their release is often stimulated by pro-inflammatory cytokines such as interleukin 1. Inflammatory chemokines function mainly as chemoattractants for leukocytes, recruiting monocytes, neutrophils and other effector cells from the blood to sites of infection or tissue damage. Certain inflammatory chemokines activate cells to initiate an immune response or promote wound healing. They are released by many different cell types and serve to guide cells of both innate immune system and adaptive immune system. 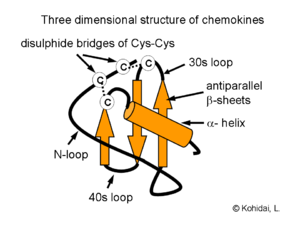 All chemokines share a typical Greek key structure that is stabilised by disulfide bonds between conserved cysteine residues.

Proteins are classified into the chemokine family based on their structural characteristics, not just their ability to attract cells. All chemokines are small, with a molecular mass of between 8 and 10 kDa. They are approximately 20-50% identical to each other; that is, they share gene sequence and amino acid sequence homology. They all also possess conserved amino acids that are important for creating their 3-dimensional or tertiary structure, such as (in most cases) four cysteines that interact with each other in pairs to create a Greek key shape that is a characteristic of chemokines. Intramolecular disulfide bonds typically join the first to third, and the second to fourth cysteine residues, numbered as they appear in the protein sequence of the chemokine. Typical chemokine proteins are produced as pro-peptides, beginning with a signal peptide of approximately 20 amino acids that gets cleaved from the active (mature) portion of the molecule during the process of its secretion from the cell. The first two cysteines, in a chemokine, are situated close together near the N-terminal end of the mature protein, with the third cysteine residing in the centre of the molecule and the fourth close to the C-terminal end. A loop of approximately ten amino acids follows the first two cysteines and is known as the N-loop. This is followed by a single-turn helix, called a 310-helix, three β-strands and a C-terminal α-helix. These helices and strands are connected by turns called 30s, 40s and 50s loops; the third and fourth cysteines are located in the 30s and 50s loops.[1]

Members of the chemokine family are divided into four groups depending on the spacing of their first two cysteine residues. Thus the nomenclature for chemokines is, e.g.: CCL1 for the ligand 1 of the CC-family of chemokines, and CCR1 for its respective receptor.

Examples of CC chemokine include monocyte chemoattractant protein-1 (MCP-1 or CCL2) which induces monocytes to leave the bloodstream and enter the surrounding tissue to become tissue macrophages.

CCL5 (or RANTES) attracts cells such as T cells, eosinophils and basophils that express the receptor CCR5.

The two N-terminal cysteines of CXC chemokines (or α-chemokines) are separated by one amino acid, represented in this name with an "X". There have been 17 different CXC chemokines described in mammals, that are subdivided into two categories, those with a specific amino acid sequence (or motif) of glutamic acid-leucine-arginine (or ELR for short) immediately before the first cysteine of the CXC motif (ELR-positive), and those without an ELR motif (ELR-negative). ELR-positive CXC chemokines specifically induce the migration of neutrophils, and interact with chemokine receptors CXCR1 and CXCR2. An example of an ELR-positive CXC chemokine is interleukin-8 (IL-8), which induces neutrophils to leave the bloodstream and enter into the surrounding tissue. Other CXC chemokines that lack the ELR motif, such as CXCL13, tend to be chemoattractant for lymphocytes. CXC chemokines bind to CXC chemokine receptors, of which seven have been discovered to date, designated CXCR1-7.

The third group of chemokines is known as the C chemokines (or γ chemokines), and is unlike all other chemokines in that it has only two cysteines; one N-terminal cysteine and one cysteine downstream. Two chemokines have been described for this subgroup and are called XCL1 (lymphotactin-α) and XCL2 (lymphotactin-ß). These chemokines attract T cell precursors to the thymus.

A fourth group has also been discovered and members have three amino acids between the two cysteines and is termed CX3C chemokine (or d-chemokines). The only CX3C chemokine discovered to date is called fractalkine (or CX3CL1). It is both secreted and tethered to the surface of the cell that expresses it, thereby serving as both a chemoattractant and as an adhesion molecule.

For more details on this topic, see Chemokine receptor.

The discovery that the β chemokines RANTES, MIP (macrophage inflammatory proteins) 1α and 1β (now known as CCL5, CCL3 and CCL4 respectively) suppress HIV-1 provided the initial connection and indicated that these molecules might control infection as part of immune responses in vivo.[4] The association of chemokine production with antigen-induced proliferative responses, more favorable clinical status in HIV infection, as well as with an uninfected status in subjects at risk for infection suggests a positive role for these molecules in controlling the natural course of HIV infection.[5]