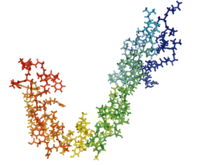 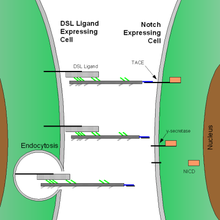 The notch signaling pathway is a highly conserved cell signaling system present in most multicellular organisms.[1] Notch is present in all metazoans, and mammals possess four different notch receptors, referred to as NOTCH1, NOTCH2, NOTCH3, and NOTCH4. The notch receptor is a single-pass transmembrane receptor protein. It is a hetero-oligomer composed of a large extracellular portion, which associates in a calcium-dependent, non-covalent interaction with a smaller piece of the notch protein composed of a short extracellular region, a single transmembrane-pass, and a small intracellular region.[2]. Notch signaling promotes proliferative signaling during neurogenesis and it's activity is inhibited by Numb to promote neural differentiation.

In 1914, John S. Dexter noticed the appearance of a notch in the wings of the fruit fly Drosophila melanogaster. The alleles of the gene were identified in 1917 by Thomas Hunt Morgan.[3][4] Its molecular analysis and sequencing was independently undertaken in the 1980s by Spyros Artavanis-Tsakonas and Michael W. Young.[5][6]

The Notch protein sits like a trigger spanning the cell membrane, with part of it inside and part outside. Ligand proteins binding to the extracellular domain induce proteolytic cleavage and release of the intracellular domain, which enters the cell nucleus to modify gene expression.[7]

Because most ligands are also transmembrane proteins, the receptor is normally triggered only from direct cell-to-cell contact. In this way, groups of cells can organise themselves, such that, if one cell expresses a given trait, this may be switched off in neighbour cells by the intercellular notch signal. In this way, groups of cells influence one another to make large structures. Thus, lateral inhibition mechanisms are key to Notch signaling.

The notch cascade consists of notch and notch ligands, as well as intracellular proteins transmitting the notch signal to the cell's nucleus. The Notch/Lin-12/Glp-1 receptor family[8] was found to be involved in the specification of cell fates during development in Drosophila and C. elegans.[9]

The notch signaling pathway is important for cell-cell communication, which involves gene regulation mechanisms that control multiple cell differentiation processes during embryonic and adult life. Notch signaling also has a role in the following processes:

Notch signaling is dysregulated in many cancers,[23] and faulty notch signaling is implicated in many diseases including T-ALL (T-cell acute lymphoblastic leukemia),[24] CADASIL (Cerebral Autosomal Dominant Arteriopathy with Sub-cortical Infarcts and Leukoencephalopathy), MS (Multiple Sclerosis), Tetralogy of Fallot, Alagille syndrome, and many other disease states.

Inhibition of notch signaling has been shown to have anti-proliferative effects on T-ALL in cultured cells and in a mouse model.[25][26][27]

Notch and most of its ligands are transmembrane proteins, so the cells expressing the ligands typically must be adjacent to the notch expressing cell for signaling to occur.[citation needed] The notch ligands are also single-pass transmembrane proteins and are members of the DSL (Delta/Serrate/LAG-2) family of proteins. In Drosophila melanogaster (the fruit fly), there are two ligands named Delta and Serrate. In mammals, the corresponding names are Delta-like and Jagged. In mammals there are multiple Delta-like and Jagged ligands, as well as possibly a variety of other ligands, such as F3/contactin.[22]

In the nematode Caenorhabditis elegans, two genes encode homologous proteins, glp-1 and lin-12. There has been at least one report that suggests that some cells can send out processes that allow signaling to occur between cells that are as much as four or five cell diameters apart.[citation needed]

Notch 1, for example, has 36 of these repeats. Each EGF-like repeat is composed of approximately 40 amino acids, and its structure is defined largely by six conserved cysteine residues that form three conserved disulfide bonds. Each EGF-like repeat can be modified by O-linked glycans at specific sites.[30] An O-glucose sugar may be added between the first and second conserved cysteines, and an O-fucose may be added between the second and third conserved cysteines. These sugars are added by an as-yet-unidentified O-glucosyltransferase, and GDP-fucose Protein O-fucosyltransferase 1 (POFUT1), respectively. The addition of O-fucose by POFUT1 is absolutely necessary for notch function, and, without the enzyme to add O-fucose, all notch proteins fail to function properly. As yet, the manner by which the glycosylation of notch affects function is not completely understood.

To add another level of complexity, in mammals there are three Fringe GlcNAc-transferases, named lunatic fringe, manic fringe, and radical fringe. These enzymes are responsible for something called a "fringe effect" on notch signaling.[32] If Fringe adds a GlcNAc to the O-fucose sugar, then the subsequent addition of a galactose and sialic acid will occur. In the presence of this tetrasaccharide, notch signals strongly when it interacts with the Delta ligand, but has markedly inhibited signaling when interacting with the Jagged ligand.[33] The means by which this addition of sugar inhibits signaling through one ligand, and potentiates signaling through another is not clearly understood.

Once the notch extracellular domain interacts with a ligand, an ADAM-family metalloprotease called TACE (Tumor Necrosis Factor Alpha Converting Enzyme) cleaves the notch protein just outside the membrane.[2] This releases the extracellular portion of notch, which continues to interact with the ligand. The ligand plus the notch extracellular domain is then endocytosed by the ligand-expressing cell. There may be signaling effects in the ligand-expressing cell after endocytosis; this part of notch signaling is a topic of active research. After this first cleavage, an enzyme called γ-secretase (which is implicated in Alzheimer's disease) cleaves the remaining part of the notch protein just inside the inner leaflet of the cell membrane of the notch-expressing cell. This releases the intracellular domain of the notch protein, which then moves to the nucleus, where it can regulate gene expression by activating the transcription factor CSL. It was originally thought that these CSL proteins suppressed Notch target transcription. However, further research showed that when the intracellular domain binds to the complex, it switches from a repressor to an activator of transcription.[34] Other proteins also participate in the intracellular portion of the notch signaling cascade.